After a long debate, the Chilean Constituent Convention approved the Rights of Nature. Article 9 recognizes that “Individuals and peoples are interdependent with Nature and form an inseparable whole”. And more specifically, it states that “Nature has rights and that the State and society have the duty to protect and respect them”.

The Chilean example is an expression that the world is advancing in the discussion on the Rights of Nature. The reason is simple, reality can no longer be covered up. The ecological collapse is undeniable. No region, population, or sea is safe from the damage caused by this collapse, according to the report of the United Nations Panel on Climate Change (IPCC). Humanity is brutally and globally confronted with the certain possibility of the end of its existence. We must act. This explains why this debate finds a relevant point in Chile, a country affected by multiple socio-ecological destruction.

In the debates of the Chilean Constitutional Convention, the door has been opened to fundamental questions, such as the Rights of Nature. The topic is increasingly welcomed and also clashes with the lack of knowledge about its meaning and with the fear of losing privileges for its application. An argument has been put forward that speaks of the uselessness of such rights, referring to the Ecuadorian experience. It has even been said that Human Rights would be subordinated to the Rights of Nature and would affect the development model… Let us clarify some doubts.

In spite of the multiple misunderstandings in diverse instances and the limitations that are placed to impede the validity of these rights in Ecuador, beginning with its own rulers, there is room for optimism. In this small Andean country, the Rights of Nature are gradually being consolidated. A series of judicial processes – almost 60 to date – ratify this. It is an arduous task in a country trapped by unbridled extractivism.

Without minimizing the need to accelerate the pace for its greater rooting, let us keep in mind that the Constitution has been in force for less than 14 years and that its application is breaking with conservative visions. Additionally, we could ask ourselves how long it has taken for the acceptance of Human Rights, whose fulfillment in many parts is more than deficient. The same could be said of the rights of formerly enslaved Afro-descendants: slavery was abolished, but racism has not been overcome; women’s rights are advancing, but patriarchy is still present; similar reflections could be made for indigenous peoples. Accepting these shortcomings should not lead us to the obtuse conclusion that these rights are useless.

It is important to remark that, despite multiple reticence and ignorance, the rights won by traditionally marginalized groups are increasingly permeating society. Gradually, rights are provoking more social sensitivity, an awareness that is often more effective than simple institutional changes.

With respect to Ecuadorian justice, the recognition of the Rights of Nature has not resolved the conflict between Nature-object and Nature-subject. We have even registered state manipulation of these rights when they are used to expel irregular extractivist activities in certain territories in order to open the field to large mining companies.

The indignation that these aberrations can provoke should not discourage us. Let us always keep in mind that a Constitution by itself does not change reality, but it can help society to empower itself with what the Constitution provides as a vigorous tool for the crystallization of the changes that are indispensable.

In fact, in Ecuador, for many civil society organizations, these rights represent an important change of vision, they are a tool of struggle. This is not surprising since several social movements, especially indigenous and peasants, have been defending Nature in their struggles for their territories since long before the constitutional issuance of these rights. What is interesting now is that these rights strengthen the protection mechanisms for their territories and even for the defenders of Pachamama (Earth Mother in ancient Quechua language), who are often criminalized for their struggles.

Beyond Ecuador, there are advances in a global scale. According to the United Nations, 37 countries have already incorporated this issue in some way at the official and institutional level. In November 2016, in Colombia, the Atrato River and its basin were recognized as having rights by the Constitutional Court; the same happened in 2018 with the Colombian Amazon. In 2016 the Uttarakhand High Court in Naintal, northern India, ruled that the Ganges and Yumana rivers are living entities and recently Panama marked a remarkable milestone with a powerful Law on the Rights of Nature. In addition, there are other proposals underway to constitutionally accept Nature as a subject of rights.

This international echo is expanding. Since this is a matter of global repercussions, it is urgent that more and more countries constitutionalize these rights and advance in the construction of the Universal Declaration of the Rights of Nature, as was proposed in Tiquipaya, Bolivia, in 2010. This meeting was the trigger for the emergence of the International Tribunal for the Rights of Nature, built by civil society from all continents, as a preliminary step to a formal court within the framework of the United Nations to punish crimes against Mother Earth.

As Eduardo Gudynas rightly states: “the recognition of the intrinsic values of Nature imposes universal mandates since life must be protected in every corner of the planet. Global environmental problems, such as climate change or ocean acidification, further reinforce these ethics as an essential value”. And so, sooner rather than later, the globalization of these rights will follow the path of Human Rights, which served to channel the Chilean dictator Augusto Pinochet and arrest him in Europe for his crimes against humanity.

An initiative in this direction was already expressed a couple of years ago in the public action to prevent the construction of the hydroelectric power plant in Belo Monte, Brazil, which sought to defend the Xingú River and its riverside inhabitants, referring to the Rights of Nature of the Ecuadorian Constitution.

Despite the ignorance of some and the defense of the privileges of others, the acceptance of the Rights of Nature is clearly a global and unstoppable issue. Chile is now an example and the second country in the world to constitutionally free Nature from its condition as an object, as it was when it emancipated the slaves in 1823.

Finally, the claim that Human Rights would be limited by assuming Nature as a subject of rights is untenable. The Rights of Nature are not at all opposed to Human Rights. Predatory models of development that impact human and non-human life cannot be tolerated. Therefore, both groups of rights complement and enhance each other. Moreover, let us accept that without the Rights of Nature there will be no full Human Rights. 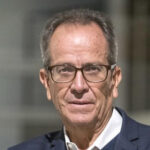 Economist and university professor. Former Minister of Energy and Mines and former President of the Constituent Assembly of Ecuador. Author of several books and member of the International Group for the Defense of the Rights of Nature.