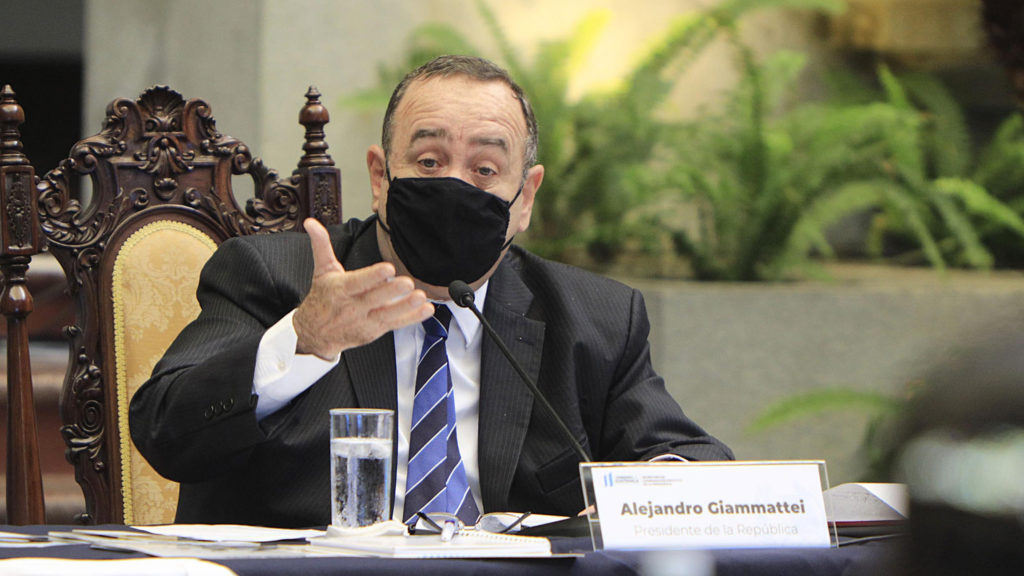 For Guatemalans, the year 2021 will be marked by the worsening of misgovernment, corruption and the co-opting of all the state’s institutions. The legacy left by the 2015 campaigns against then-President Otto Pérez Molina and his Vice President, Roxana Baldetti, was truncated after former President Jimmy Morales and his circle of power charged fiercely against the International Commission against Impunity in Guatemala (Comisión Internacional contra la Impunidad en Guatemala, CICIG) and the institutions that led this fight.

The reversal of the CICIG legacy

The situation didn’t improve with the inauguration of Alejandro Giammattei. The current president was elected in elections in which, supposedly, two political-ideological conceptions were confronting each other. But in reality, it was a dispute between two groups with the same overlapped intentions of turning the State into their personal punching bag, or piñata.

Despite the negative context, the investigations led by the defenestrated and expelled CICIG continued against all odds under the direction of prosecutor Juan Francisco Sandoval, from the Special Prosecutor’s Office against Corruption. But over time, they lost credibility due to the blatant co-optation of the Public Prosecutor’s Office by the political-business group that accompanies Giammattei.

Thus, the discourse of support to the fight against corruption gradually became a mere empty speech of content and intentions, by means of an underhand fight against the Special Prosecutor’s Office against Corruption and Impunity (FECI), which prevented it from moving forward. Especially, when the inquiries of the prosecutors and their assistants approached the president, his intimates’ group and, above all, his indecent interests.

According to declarations by former prosecutor Sandoval, who is in self-exile, Attorney General Consuelo Porras hindered his investigations in every conceivable way, legal or not. But the straw that broke the camel’s back, according to experts familiar with the matter, was the investigation into the arrival of two private airplanes in Guatemala with Russian and Kazak license plates, which would have brought businessmen from those countries to Guatemala to agree on mutual “favors” with President Giammattei himself.

According to sources who prefer not to reveal their identity, the supply of Sputnik V vaccines was negotiated in this context. In exchange, exploitation licenses and mining rights in the east of the country were also negotiated, as well as the concession of one of the country’s main ports.

Ironically, these contracts are very similar to those signed during the administration of Otto Pérez Molina that resulted in investigations for the payment of millionaire bribes through the former private secretary of the deposed and impeached Pérez Molina.

The discontent of many Guatemalans, outraged by the dismissal of the prosecutor Juan Francisco Sandoval, as well as by the mismanagement of the pandemic, is so far visible mainly in publications on social media and through organizations of the civil society. However, the role of the native peoples has been growing until it led to the so-called Plurinational Strike on July 29.

The mobilization of more than 200,000 people, which caused some 90 blockades, was led by the indigenous group 48 Cantones de Totonicapán. Its general secretary, Martín Toc, 35 years old, is beginning to emerge as a reference within grassroots movements, according to Guatemalan social leaders.

So far, those who haven’t expressed a clear position are the business chambers, which play an important role in the Guatemalan economy. Some believe that they are waiting for the events to unfold, while others believe that they will keep the usual complicit silence in light of the blunders of politicians and government officials.

The U.S. State Department has issued official and unofficial comments condemning the disregard for the independence of the Guatemalan judiciary. However, for the moment, Washington hasn’t gone further.

With the excuse of not being able to act directly in internal matters of a sovereign state, the current tenants of the White House seem to be weighing, for now, how far to put pressure on the only president of the conflictive Northern Triangle who isn’t too elusive to them. While the State Department considers El Salvador’s Nayib Bukele as a thorn in its side, and Honduras’ Juan Orlando Hernandez as an outgoing president, Giammattei is the only president considered a partner which  they have left in the region.

On August 9, another day of protests took place and they are anticipated to continue. But it is to be expected that the response from the national government will continue along the lines of entrenchment and deaf ears, while they consolidate their interests through all kinds of corruption.

Furthermore, it is to be expected that the circle of political-institutional power will focus on eliminating the figure of Human Rights Ombudsman, Jordan Rodas, who is seen as the only major obstacle to the plans of the group that co-governs with Giammattei.

New calls from organized civil society could lead to a greater degree of instability. But on the other hand, this would also further delay the arrival of the much needed investments so necessary to overcome the economic crisis aggravated by the Covid-19 pandemic.