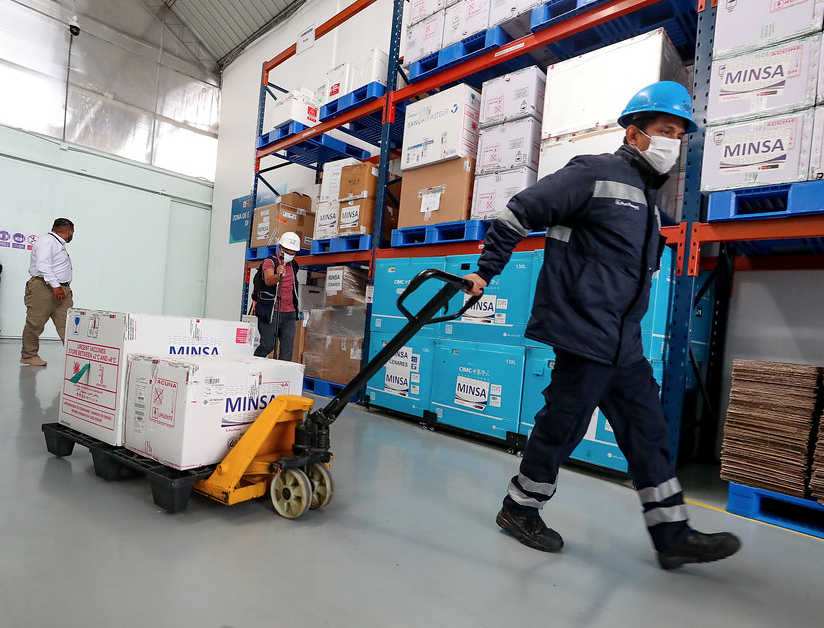 With the start of vaccination against Covid-19, 2020 ended placing the first step towards the end of the pandemic. However, 2021 has posed new uncertainties and challenges. Starting from the “One Health” approach for humans, animals and the planet, the spread of the virus is rooted in previous inequities that result from weak health systems, labor informality or access to education, while exposing the effects of climate change. Facing multiple crises, including multilateralism, Covid-19 and globalization, what are the keys to the vaccines dispute?

The first key is human security, although the collective and national measures present mixed pictures. While deaths continue to rise, the “massive” appropriation of vaccines by certain states reflects new forms of global inequality.

The richest countries, which represent 14% of the world population, have monopolized 84% of vaccines, which could be classified as a “vaccine apartheid”, said doctor Fernando Lamata in the yearbook of the Center for Education and Research for Peace (CEIPAZ). Moreover, the COVAX mechanism, created for the purchase and distribution of vaccines to developing countries, ended up being “a beautiful idea that has fallen short,” as journalist Ann Danaiya Usher said in The Lancet.

Contrasts can also be seen from the geopolitical lens with the so-called “vaccine diplomacy”, implemented through donations from developed to developing countries, as announced at the last G7 summit. Although these measures help to build the scaffolding for emergency situations, they are specific and partial and don’t solve the underlying problem. They also worsen the asymmetric center-periphery relations.

Considering that less than 25% of the world’s population received at least one dose, the G7 decision to donate 1 billion doses is insufficient, considering the vast differences between continents and that some ten billion more are still required to achieve herd immunity on a global scale.

The second key is global governance, both at the health and trade level, because market regulation is essential in terms of intellectual property and vaccines. Within this framework, some multilateral actions have proposed promising alternatives. Among them, the recent resolution on Strengthening the preparation and response of the World Health Organization in the face of health emergencies, where the need to create international standards that protect human security is evident.

In terms of international trade, the World Trade Organization (WTO) has discussed India’s and South Africa’s proposal on the temporary suspension of vaccines’ intellectual property rights and other products and technologies related to Covid-19. The proposal is supported by about a hundred low- and middle-income countries.

After an initial rejection, the United States, the European Parliament, China and other states are now willing to discuss the issue. In the last meeting at the WTO, they decided to follow this path. Is global governance efficient? Is discussing the subject enough? The answer is no to both questions. However, all changes start with a discussion.

The absence of international standards

Global governance rests on International Law as a set of norms that are responsible for building a public space where the voices of the weakest are heard, as stated by the Finnish jurist Martti Koskenniemi. Therefore, the third key to understanding this topic is found in International Law.

Why is a legal discussion on trade-related intellectual property rights necessary in the midst of a global health emergency? The key may not be international law, but its absence. There are no international standards on pandemics or syndemics—the sum of two or more epidemics—that establish limits on intellectual property in the event of a global emergency.

Therefore, the proposal for an international instrument to prepare for future pandemics is welcomed, sponsored by the World Health Organization, the President of the European Council and more than 30 Heads of State. This shows that for a global issue the answer must (and must only) be global. And although the legal journey is just beginning and that it is essential to promote multilateralism to give it a journey, the document highlights the need to strengthen International Law in the face of individual actions.

Other options to get out of the crisis

In the wake of a growing weight of transnational companies, other options to manufacture vaccines are emerging and that are based on collaboration between the public and private spheres: the so-called “third way”. These ideas, cited by the economist Mariana Mazzucato in her book “The Entrepreneurial State”, are close to what AstraZeneca is doing today.

The productive capacity of some countries in Latin America and the Caribbean—i.e. Argentina, Brazil, Mexico—could make possible alternatives due to a pressing factor such as time. Above all, taking into account the terms of the discussion in the WTO, as well as the processes of transmission of know-how and logistics that will be required a posteriori, in the event that the temporary suspension takes place.

In sum, it is necessary to address three aspects to achieve the accessibility of vaccines: the contrasts of human security protection, the absence of international standards, and the challenges of efficient global governance. Addressing these three aspects in a multilateral fashion constitutes the basis for building resilience in an increasingly inequitable and vulnerable world.

Professor at the Universidad de la República (Uruguay). She holds a Master’s degree in International Relations from the same university and is co-responsible for the Espacio de Relaciones Internacionales e Interdisciplina (ERII).