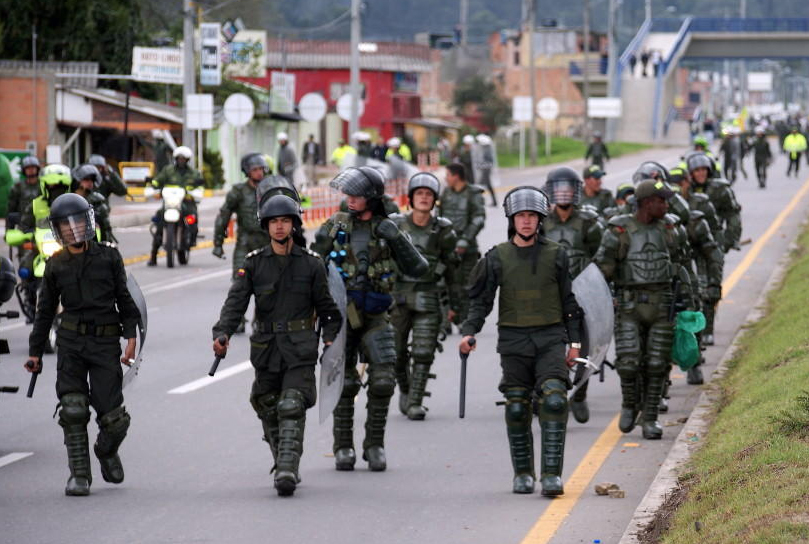 We knew it was going to happen, but we didn’t know when. The street would once again make itself felt in a country that is not used to doing so: protest has been a verb that is suspected of having affinities with the guerrillas, and Colombians are characterized by resilience, an attitude that is indispensable for surviving Macondo’s tragic realism.

And now, almost a year after the country was shaken by a national strike paused by the end of the year vacations and government maneuvers, it was a police incident on a Bogotá street, analogous to the case of George Floyd in the United States, that unleashed the accumulated indignation against an institution that during the five months of confinement made news because of its arbitrariness. Javier Ordóñez, a law student and father of two children, was beaten to death by seven uniformed officers in a police station where he was taken after they imposed, in full view of a cell phone camera, several electric shocks and sentenced him to death with a fatal “you can’t escape this”.

The erratic way in which the pandemic was handled left Colombia with a battered democracy and an unprecedented social balance: unemployment of 20% and labor informality of 48%. Unable to balance the political values at stake, the rulers justified the extensive quarantine with “we are saving lives”, an article of faith that demanded trust and confinement. But it was time to pay the bills.

Despite the persistence of the anachronistic ELN guerrillas and residual criminal gangs, Colombia is the oldest and most stable democracy in Latin America. However, and perhaps because of this, its ruling class tends to be immobile, the justice system systematically refuses allow for reform, Congress and parties have a high level of dsitrust associated as they are, with clientelism and corruption. Fetishism for the law coexists with an impunity of more than 90% and a plummeting of confidence in judicial institutions because of their inefficiency and politicization.

The predominance of a strictly juridical viewpoint prevents bolder public policy decisions and gives room to ethics and other disciplines in the public conversation. That is why, for some unwary or cynical people, announcements of “thorough investigations” and “zero tolerance” against those who deviate from the law-as Duque did in the case of Ordóñez-should settle any discussion. Why talk about injustice or inequality or express solidarity and compassion if what we need is to apply the law and defend institutions? many leaders seem to think so.

In this context, when the street speaks, very few know how to interpret its claims. And often, they are not even heard. In addition to the suspicions of insurgent motivations – reinforced by the Minister of Defense with supposed intelligence information from national and international plots – and the immobility of the leadership, there is the vandalism factor, which makes a good part of the political, economic and media establishment of the country focus almost exclusively on vandalism against public goods and assume that this is the most relevant element of the demonstrations. For this reason, even the most legitimate citizen protests such as those provoked by the murder of Ordóñez and several other civilians by the police are not seen as a matter of rights and democracy, but as a problem of public order.

Duque, hostage of the Public Force

In June 2018, Colombia elected an inexperienced and almost unknown candidate to lead the country’s destiny. His greatest achievement, as in the dynasties, was to be the one appointed by Alvaro Uribe, the most important electoral phenomenon so far this century. The disciple, however, has proven to be far from the political stature of his mentor. And if his master ruled as an Army General, his disciple does so only as a police patrolman. If his master inherited a country at the most critical moment of the insurgent threat and facing the abyss of being a failed state, the disciple received it when he had just signed peace and had the challenge of expanding the state to the whole territory. But he did not know how to do it.

Iván Duque has a script for another country and a speech only for his bases -including the Police Forces-, a version of the right-wing conservatism whose authoritarian drift leads them to show as their greatest achievements the ruling of life sentences for child rapists and the taking over the leaderships of security agencies. Punitive populism and bureaucracy, basically. And although their government has majorities in Congress, it has been unable to pass a single major reform, despite the country’s demands for structural justice, health, and the pension system, reforms among others.

As is to be expected, a government with the rhetoric of armed conflict has not been able to interpret the country of the post-peace agreement. Even with more than a dozen dead and almost two hundred wounded in the streets of various cities during the protests, a situation that the mayor of Bogotá, Claudia López, called “a massacre” and “the most serious thing that has happened to Bogotá since the storming of the Palace of Justice,” Duque has doubled down on his fierce defense of the police, whom he calls “heroes and heroines”.

Perhaps it is too much to ask for a right-wing government to sincerely apologize to the families of the victims of police violence. But it is difficult to understand why it refuses to structurally reform an institutional Frankenstein: a civilian institution that depends on the Ministry of Defense, whose abuses are judged – in a manner of speaking – by the military criminal justice system and which remains anchored in the friendly-operational logic of the armed conflict period.

But beyond the institutional design, it is also incomprehensible because police abuses have become part of the landscape and its unfavorability has increased from 14% in July 2008 to 57% in August. However, it is not only a problem of practice: the Police Code approved by Congress in 2016 gave more faculties to the police, some of them as invasive of freedoms as entering a house without the resident’s permission, fine citizens for consuming liquor in the streets or if their house facades are dirty.

That is why, isolated in the Casa de Nariño, where he only governs with his university friends and his former colleagues from the IDB, and communicates with the country since the beginning of the pandemic through a daily TV program reminiscent of Chávez’s “Aló Presidente”, Duque continues to try to convince the country that police abuses are the work of “rotten apples” and expresses, as many times as it takes for those who seem to hold him hostage, his physical solidarity and unrestricted support. And so, where there are complaints from indignant citizens, he sees a problem of public order; where there are petitions for reform, he sees threats of destabilization; and where there are expressions of nonconformity he only succeeds in responding: “What are you talking about, old man?