“We cannot solve problems by thinking in the same way as when we created them.” A century ago, Albert Einstein pointed out with these words that humanity should be critical of our way of thinking, which was already creating problems for ourselves and for life on Earth itself.

We constantly see and hear news about environmental changes occurring in our environment and in different parts of the world such as climate change, loss of biodiversity, chemical pollution, land degradation, loss of fresh water, ocean acidification, and ozone depletion, among others.

In 2019, hurricanes caused 465,000 displacements in seven Caribbean countries, according to the World Health Organization and the Internal Displacement Monitoring Center (IDMC). At the same time, floods and landslides displaced 295,000 people in Brazil.

More than 50 million people, slightly more than the population of Colombia, have suffered food and water insecurity due to climate-related disasters such as floods, droughts, and storms, especially in Africa, Asia, and Central, and South America. And in this regard, it is estimated that by 2050, some 30 million people will migrate from Central America to North America due to food issues related to the climate crisis.

As if that were not enough, greenhouse gas (GHG) reductions to limit global warming to 1.5 °C are out of reach, according to the United Nations Intergovernmental Panel on Climate Change (IPCC).

It is apparent that these changes are being caused by the prevailing economic development model of which modern science is a part, and contrary to what we might like to believe, modern science has also helped develop and give rise to this model. Therefore, we, as inhabitants of the Earth, must strive to change this image of science and economic development to an alternative that aims to sustain life.

It is time for science to evolve

Today’s environmental problems have multiple scales and dimensions and occur simultaneously, making addressing their effects increasingly complex. Current science aims to develop knowledge and high technology to better “manage” the Earth and its resources. However, it would seem that it is probably more worthwhile to focus on evaluating our behavior towards humans themselves and the Earth.

At present, science tends to develop in isolation from society and, in some cases, scientific advances are driven solely by private interests. By using methods that are difficult to understand and by addressing limited and specialized communities, science seems to turn its back on populations and their realities and is no longer trusted to solve real-world problems.

On the other hand, there is also growing isolation of disciplines and the relationships between academia, governments and other actors in civil society are fragile and are running out.

The transdisciplinary approach, an evolving idea

One of the solutions being discussed in academia is to build scientific knowledge with the participation of different actors in society through a collaborative learning process.

The scientific community is often seen as an elite that develops and owns knowledge exclusively. However, due to the current gaps between scientific knowledge and everyday life practices, community leaders advocate opening science to other forms of knowledge. Also, among climate change researchers and experts, there is a growing consensus on the importance of traditional knowledge and practices of indigenous peoples and local communities in addressing climate change.

This synergy clashes, however, with the fact that there are insufficient means and incentives for academia, governments, and civil society to work more closely with communities on the ground. Moreover, this should be a never-ending collaborative learning process, rather than a simple step to “include” other forms of knowledge. So, what is the solution?

Open science to other forms of knowledge and enhance cooperation.

It is hard to find a single solution to all facets of this issue, but often complex problems may require a complex set of solutions. In this context, a fuzzy concept has emerged: “transdisciplinarity”, which is not yet fully defined but still evolving. However, several of its characteristics can be observed in the daily practices of academic and non-academic communities, while reinforcing its content.

One example of the international community’s efforts around “transdisciplinarity” in science is the Inter-American Institute for Global Change Research (IAI), which is committed to promoting regional cooperation for transdisciplinary research. This organization brings together states and institutions in the Americas to conduct research on a regional scale, which is necessary and appropriate for environmental issues.

Another broader international initiative that promotes transdisciplinary research on global environmental change issues is the Belmont Forum.  Projects carried out under this initiative integrate the social and natural sciences as well as the humanities. In addition, projects must be co-designed and co-implemented by diverse stakeholders (academia, public and private sector, intergovernmental, local communities and indigenous peoples, etc.) in a collaborative manner. Projects are developed within the framework of international consortia of at least three countries and are funded by national and international partners.

There are still challenges to overcome such as national and international institutional arrangements, and economic and funding systems, which among others are designed for the existing economic development and science models. As inhabitants of the evolving earth who want to remain in harmony with the planet, it is our obligation to join efforts to achieve a renewed collective imaginary in line with the challenges we face. 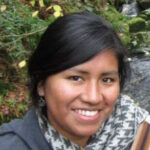 Environmental Engineer from the National Polytechnic Institute (Mexico). with a Master’s degree in Environmental Change and International Development from the University of Sheffield (England). Member of OWSD Bolivia and current IAI STeP Fellow.