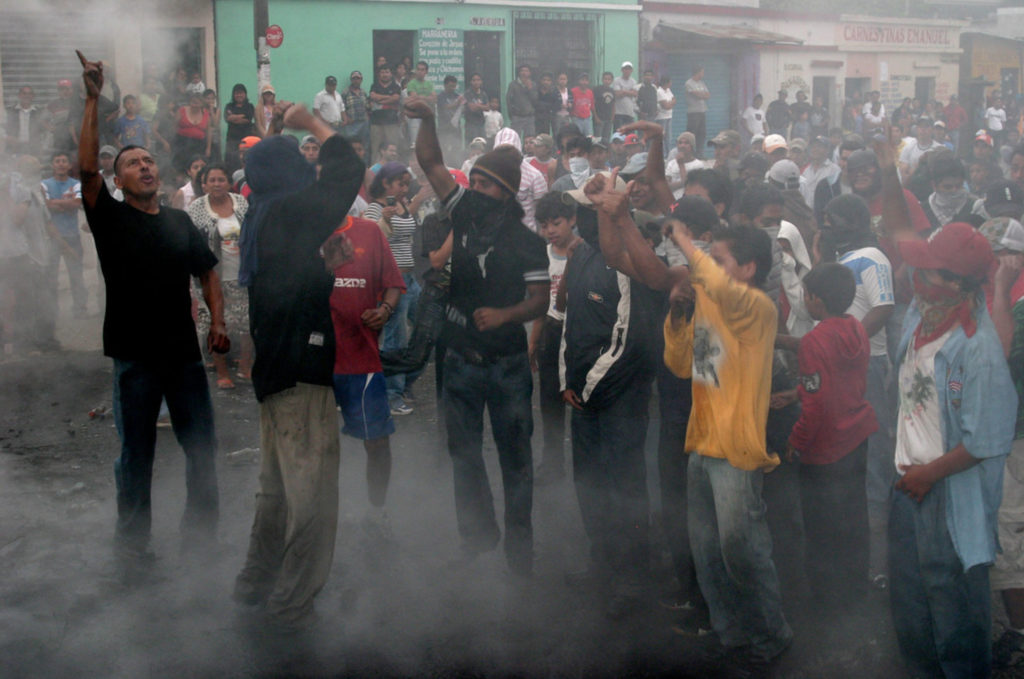 Saturday, December 12 was the third consecutive protest in Guatemala. A thousand people gathered in front of the Presidential Palace to demand the resignation of President Alejandro Giammatei and a profound reform of the country’s political system. A few days before (on December 9), civil groups and indigenous and social organizations blocked roads in different areas of the country against “acts and resolutions of the Executive and Legislative Branches, which are trampling on the people of Guatemala.

The protests began on November 21 (#21N) and were directed at Congress after the vote on the national budget. And although this was suspended a few days later by the president himself, the citizen rage had been ignited.

The Budget of the Republic presented the priorities of the government of Alejandro Giammatei for the year 2021. In the context of a health crisis and an accumulation of social frustration, the protesters denounced both the significant increase in the budget (and the prospect of greater state indebtedness) and the government’s weak commitment to health (despite the health crisis), human rights and education.

Furthermore, the budget consolidated state interventions towards sectors affected by high suspicions of corruption, in particular the works and infrastructure sector.

what has happened since #21N is not only a question of “budget”.

However, what has happened since #21N is not only a question of “budget”. The Guatemalan indignation, which was expressed violently by the burning of part of Congress, deeply questions the political system as a whole.

Nonetheless, the wave of #21N has a fundamental background for understanding what is at stake. That déja-vu refers to the “Guatemalan spring” of April 2015, a social protest unprecedented since the October 1944 revolution, which was unleashed against President Otto Pérez Molina and his Vice President, Roxana Baldetti, in reaction to their links to a transnational corruption network. The case, better known as La Línea, concerned a network that operated through the detour of customs fees.

From April to September 2015, thousands of Guatemalans of all ages and social sectors took to the streets. For the first time, citizens were demonstrating massively against a system of corruption that directly touched the very top of the state. The evidence published by the Public Ministry and the International Commission Against Impunity in Guatemala (CICIG) that unleashed social rage precipitated the resignation of President Otto Pérez Molina in September 2015.

That “Primevera” was a first act of resistance against a structural and long-term trend of capture of the Guatemalan State by the country’s political and/or economic elite. Banners such as “they made the wrong generation”, “out criminals disguised as rulers”, “we are fed up with their lies”, “Guatemalans, let’s break the culture of silence” attested to this. This response, promoted by the movement #JusticeYa, brought together very diverse sectors of society under the same priority: to end a political system articulated around corruption. This precedent created fissures in the culture of impunity consolidated around the State.

The consecutive elections of Jimmy Morales (2015) and Alejandro Giammatei (2019) can be understood as attempts at transitions by the state by focusing attention on the regular functioning of electoral contests to lower social pressure. However, the Guatemalan problem is far from electoral democracy. Without hiding new cases and a high level of social protest during the Morales administration (2015-2019), an attempt was made to normalize political-institutional life on inhospitable terrain.

Beyond the budgetary issue, the new “Guatemalan awakening” is the product of a historical process of accumulation of social frustration and exclusion in the face of an inoperative political system. As well as from an immediate context characterized by a state of multi-sector crisis (health, environment, economic).

At the electoral level, a general election was organized in 2019 in a context of high politicization and judicialization of the electoral process (annulment of candidates of Thelma Aldana, Zury Ríos and Edwin Escobar) and of very low quality of the electoral offer, echoing the structural weakness of the Guatemalan political parties. The election took place without channeling the major social demands and there was a massive decline in participation, 61.8% in the first round and 42.7% in the second. Thus, the dysfunctionality of electoral democracy in a context of high social demands and expectations was fertile ground for social anger to be unleashed.

The vote on the budget was the last straw, which transformed the population’s exhaustion into a new cycle of protests, some violent (burning down of Congress), some peaceful (#5D for the December 5 demonstrations, and #12D). The fed-up citizenry has favored a growing convergence of traditionally independent social sectors: indigenous associations, businesses, public and private universities and human rights organizations, etc.

At the political-institutional level, #21N represents the fed up with a government delegitimized by a critical management of the pandemic and by a late attention to populations affected by hurricanes Eta and Iota. On the other hand, the legislative branch also suffers from a significant lack of credibility due to the accumulation of corruption issues and instrumentalization of appointments of officials (see the recent case of judges to the Supreme Court of Justice and the Court of Appeals).

In this framework, the protests revealed fractures in the elites, with a deep political rupture between President Giammatei and his Vice President Guillermo Castillo, who immediately proposed a joint resignation in the face of the wave of protests “for the good of the country”. The latter also questioned the President’s invocation of the Inter-American Democratic Charter (of the Organization of American States, OAS).

With the declaration of the Human Rights Ombudsman’s Office that human rights violations occurred during the #21N protests, Guatemala’s political system seems even more weakened. Day by day the government shows an inability to protect both people and territory, and to legitimately exercise its sovereignty. And Guatemala’s dysfunctional democracy faces increasing citizen and social demands.

In the end, as in the Chilean case, it is clear that this is not a one-time outrage since voices are now being raised for a profound change in the political system. Some are calling for a change in the way the elections are run with a reform of the Electoral and Political Parties Law to achieve true political representation. Others call for more profound changes through a reform of the Constitution (the current Constitution dates from 1985).

It is not possible to anticipate or foresee the future of these protests, but we can say that they are part of an ascending trajectory of citizen and social demands in the face of a collapsed state. Undoubtedly, Guatemalan democracy is at a crossroads.

Full Professor of Political Science at the Univ. of Tours (France) and researcher at the Political Observatory of Latin America (OPALC) at Sciences Po (Paris). PhD in Comparative Politics from Sciences Po. Specialized in comparative regionalisms and Latin American politics.