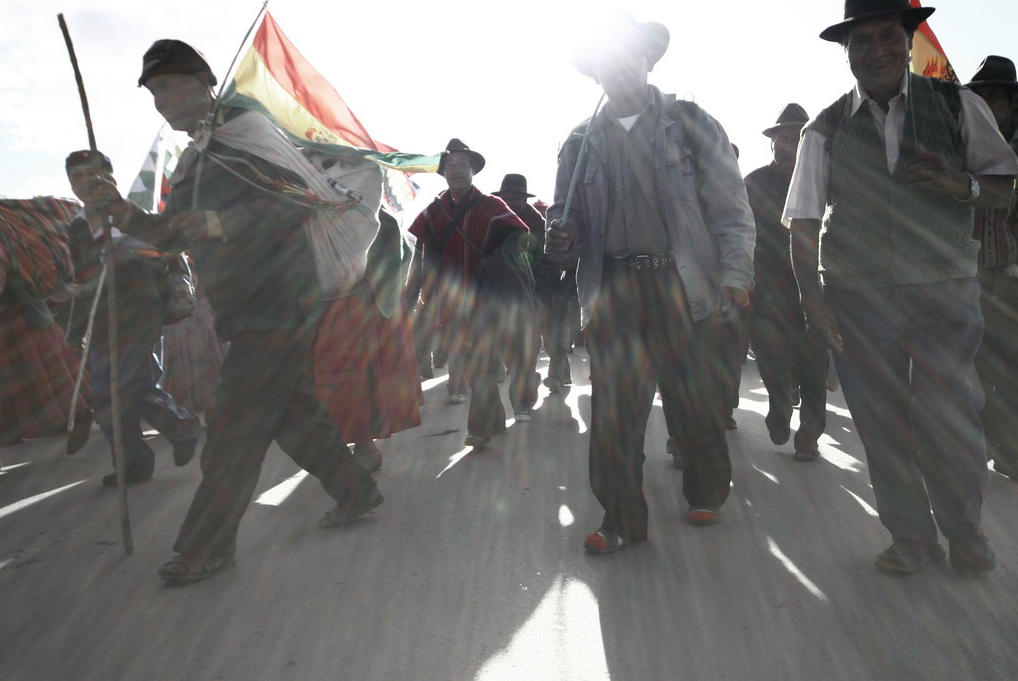 “We are Jenecherú, we are fire, the fire that never ends”, David Choquehuanca, vice-president elect.

On the 18th of October, Bolivians faced an electoral process that was postponed up to three times by the Supreme Electoral Tribunal (TSE) due to the Covid-19 pandemic. Bolivia is precisely a country specially hit by the virus: with almost 141,167 infections and more than eight thousand deaths, the country’s Gross Domestic Product (GDP) is contracting at an 11.11 percent rate and is absent of efficient public policies to face the health crisis. Despite this panorama, 87 percent of Bolivians took part in these elections and the Movement for Socialism–Political Instrument for the Sovereignty of the Peoples (abbreviated MAS-IPSP, or simply MAS) repeated a new electoral victory. This time winning more than 55 percent of the votes, leaving well behind the Civic Community coalition, with 29 percent, and the Creemos coalition, with 14 percent of the vote.

The MAS-IPSP binomial, formed by Luis Arce and David Choquehuanca as its running mate, overcame the 2019 civil movement that condemned electoral fraud, the absence of Evo Morales on the ballot and a virtual second round announced by the pollsters and also expected by the opposition. One key factor for MAS’s victory was its internal reconfiguration, following Evo Morales’ resignation and departure of the party’s former leadership, and the building of alliances based on deepening the ethnic and regional divide.

After the presidential interruption in 2019, the MAS was left without any visible leadership in both the Legislative and the streets. The transition government headed by Jeanine Añez initiated a political persecution of MAS’s leaders and officials and momentarily disarticulated the party. However, unlike the political alliances that emerged last year to compete in the elections, such as Civic Community and Creemos, MAS had since its foundations a communitary and unionist political structure that consolidated it as an unconventional party over several years. Represented by MAS-IPSP as an acronym for electoral purposes and by the Unity Pact, the party brings together social organizations that are related to its cause and defines the strategies to defend the process of change, as a popular structure.

The MAS was born, in 1994, as a political movement of rural indigenous organizations. After the first government, in 2006, it brought together a large number of social sectors, ranging from unions, labor organizations, businesses and the middle class, either on the basis of ideological affinity or a logic of mutual interests. One of the main reasons why the party achieved an electoral hegemony at a national level was due to the formation of new alliances with conservative sectors and opponents of Evo Morales and the MAS, which are geographically based in the east of Bolivia. Therefore, the party of social movements grew as an electoral machine in the hands of a caudillista leader and with a weak internal democracy, but with a loyal militancy.

For the 2019 elections, Evo Morales as a character and the lack of leaderships’ renewal caused a deep erosion in the MAS.

For the 2019 elections, Evo Morales as a character and the lack of leaderships’ renewal caused a deep erosion in the MAS. The fourth consecutive nomination of Morales to the elections, against the results of the 21F referendum, began to show the authoritarian character of his government, and those alliances with the conservative sectors, which have no militancy and loyalty to the party, moved away. The Unity Pact also wore out, in large part due to a bureaucratized leadership in government posts without any renewals.

Following the political and social crisis and Evo’s departure from the country, internal contradictions appeared inside the MAS, especially between those who opted for exile and those who did not resign from their posts. One of those moments was the selection of the presidential candidate and the running mate. In Bolivia, and from the altiplano militancy, an indigenous candidacy was supported, headed by David Choquehuanca, former foreign minister, and a young leader of the coca leaf producers in the Chapare, Andrónico Rodríguez. They distanced themselves from the middle class, which was condemned by the party bases due to their distance from the process of change. But, as in previous elections, the candidates were finally appointed by Morales and the leadership in exile, and thus the Arce-Choquehuanca binomial was born.

The MAS candidates tried to stay away from Evo’s ghost in order to win back the middle class’ support. But Evo, in addition to being the MAS campaign manager, accompanied the electoral process from Argentina, where he was living in exile. Social media was the new space for interaction, especially with the coca growers’ movement and the party’s founding organizations in the Chapare.

These disaffections could only be overcome by a common enemy: a deeply racist and discriminatory opposition force embodied by Jeanine Añez’s government. In 2002, the United States ambassador, Manuel Rocha, was the best campaign manager for MAS. In this electoral process it was Añez’s cabinet, especially her interior minister, Arturo Murillo, who took on this role. Far from building ties for the resolution of political and social problems, he deepened the ethnic and regional ruptures that characterize Bolivia.

In 2019, the MAS lost all the popular support on the streets. But in August this year, it  rearticulated itself once again, bringing together the social forces that were outside the party –but within the Unity Pact– to ensure the date of the national elections and to avoid the extension of the Añez government. Moreover, an unusual alliance was established with the rural indigenous sector led by Felipe Quispe, also known as El Mallku, who has been historically critical of the process of change. However, in the wake of discriminatory discourses and public policies, an implicit alliance originated, which only threatened the economy of the rural areas and the poor. Among them, one of the most controversial, was the closing of the school year.

These internal and external confrontations led the reconfiguration of a new vision of “non-submission” within the MAS. A pact that, according to the organizations’ statements, helps to bring together all the original social forces, based on the renewal of leadership as a promise for the future. Both within the MAS and the organizations, in order to become a party that could seduce the loyalty of the middle-class vote.

MAS, once again, took advantage of its organic structure and the practices that gave it its first electoral victory in 2005: a door-to-door campaign and multitudinous rallies –notwithstanding the Covid-19 pandemic–, without considering the state apparatus that sustained Evo’s campaigns over 14 years. With all this, the MAS could bank into the erosion of opposition alliances, which focused on a discourse of fear and denial of the other, converging, once again, on the origins of MAS.

Master in Latin American Studies and Doctoral candidate in Rule of Law and Global Governance from the University of Salamanca. Her main research área is on Latin America political systems.