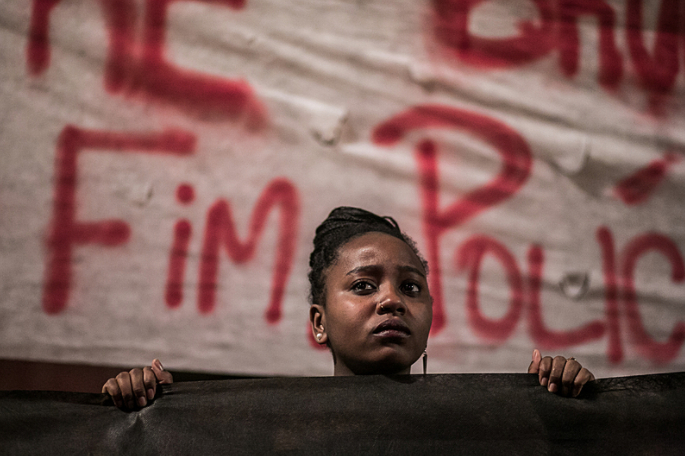 In recent times, since the recent anti-racist mobilizations in the United States, there has been a strengthening of black women’s and black movements in Brazil and other parts of so-called “Latin America” due to the resumption of the debate on race. Within this framework, there has been a resurgence of interest in ideas and theories of the past, such as those developed by authors like Abdias Nascimento (1914-2011) and Lélia Gonzalez (1935-1994). Some of the most important works of these two black Brazilian intellectuals, – awaiting greater recognition – have been republished. ‘Quilombismo: documentos de una militancia panafricanista’, published by Nascimento in 1980, received a new edition in 2019. And ‘For an Afro-Latin American Feminism’ was published in late 2020, bringing together Gonzalez’s major works.

Nascimento’s and Gonzalez’s ideas innovated thinking about blacks in the diaspora and “intersectionality,” particularly the ideas of “quilombismo” (Nascimento’s) and “amefricanidad” (Gonzalez’s), which claim a prominent place in critical theory produced in the Global South. These works anticipate various debates and may contribute to our necessary mental decolonization.

Quilombos as spaces of resistance

Abdias Nascimento founded the Teatro Experimental do Negro in 1944 and introduced the negritude movement in Brazil. He was a professor at universities in the United States and Nigeria, participated in the foundation of the Unified Black Movement in 1978, was a federal deputy and senator. He was also a writer, artist and actor. In his works, he addressed the historical need for resistance of the black man of the diaspora in the Americas.

From this derives the tradition of quilombos: an effort to rescue freedom and dignity through escape from captivity and the organization of a free society. The formation of quilombos became a general and permanent movement, even after the abolition of slavery. But for him, the notion of “quilombo” went far beyond historical and surviving quilombos: it was a metaphor for all spaces of black resistance and sociability.

Consequently, “quilombismo” transcends the physical existence of quilombos. It would also be in more or less tolerated organizational models: in the Catholic black brotherhoods, in syncretic expressions such as candomblé, in sports societies, in mutual aid and freedom-buying funds, or in cultural institutions such as samba schools.

Regardless of their declared function, all these spaces played and play a role in the maintenance of the African community as spaces of resistance. All these activities would constitute a unity, a practice of liberation, making the black man an agent of his own history.

For Nascimento, this is where the “community” would be the central element. It would be a black-African historical and psychosocial heritage, rooted in its history, its culture, its experience. Echoing the ideas of the negritude movement, the author bet on the “reinvention of an Afro-Brazilian way of life based on its historical experience, on the use of critical and inventive knowledge of its institutions battered by colonialism and racism”.

In his work there is a deliberate effort to reflect on Brazil starting from the black, and to produce original concepts. There is a clear intention to overcome Eurocentric mental colonization, and to replace it with “quilombist liberation”. Quilombismo would be the adaptation to Brazil of the communitarianism of the African tradition: in the quilombola society, all the basic elements of survival would be of collective use.

The enslaved African brought to Brazil (and to the Americas) the communal character of the socioeconomic organization that existed in Africa and reproduced it here. Quilombismo would thus constitute an alternative to capitalism: it was not a project of the past, but of the future.

There is also in Nascimento’s work a clear notion of “internal colonialism”: the Portuguese colonial state, and later the Brazilian one, would have assumed a terrorist and illegitimate character in relation to blacks. Its intention was to eliminate them, through the genocide that Nascimento analyzes in his other fundamental work, ‘O genocídio do negro brasileiro’ (1977). That genocidal State should then be replaced by a “Quilombist National State”, through a “quilombist revolution”, to “ensure a healthy life for children, women and men, animals, sea creatures, plants, jungles, rocks and all manifestations of nature”.

The reflections of Lélia González (historian, anthropologist, black activist and feminist) bring originality to black and feminist thought. She addresses Eurocentrism and neocolonialism, the inferiorized way in which the colonized see themselves in relation to the colonizer. In this way she seeks alternatives to the idea of “Latin America”, in which indigenous people and blacks do not fit. The “America of the Latinos” is opposed to that of the “Anglo-Saxons”, but what would be the place of the non-whites in this equation?

If their destiny can no longer be the questioned project of dissolution through miscegenation, what to propose as an alternative? Gonzalez suggests an “Afroamerica” or “Améfrica”.

Beyond the racial question, the author reflects creatively on feminism, proposing a feminism that is not white, European, Western: but Afro-Latin American, for “Améfricanas”. According to Gonzalez, Améfricanas (as well as Amerindians) are initially aware that they suffer oppression because of their race, and then become aware of gender discrimination.

Class exploitation and racial discrimination would constitute the basic elements of a struggle common to men and women of a subordinate ethnicity. After all, black slavery was experienced by men and women, and “it was within the enslaved community that the political-cultural forms of resistance developed that today allow us to continue a multi-secular struggle for liberation”. The same argument could be extended to indigenous communities.

For Gonzalez, this explains the considerable presence of Amerindians and Amerindians in ethnic movements. But this participation made them aware of the gender discrimination they suffer: “our movement partners reproduce the sexist practices of the dominant patriarchy and try to exclude us from the movement’s decision-making spaces.

This led them to look to the feminist movement and its theories, “believing they would find there a solidarity as important as racial solidarity: sorority”. But what we actually found were practices of exclusion and racist domination”. This closed the cycle: the oppressions of class, race and gender were superimposed. González thus anticipated contemporary debates on intersectionality, patriarchy and sorority.

The reading of Abdias Nascimento and Lélia Gonzalez contributes to the understanding of multiple oppressions in a peripheral context and provides elements to build emancipation projects that overcome them. It highlights its topicality, especially in a context of social regression and deepening of the genocide of the black and indigenous Brazilian population.