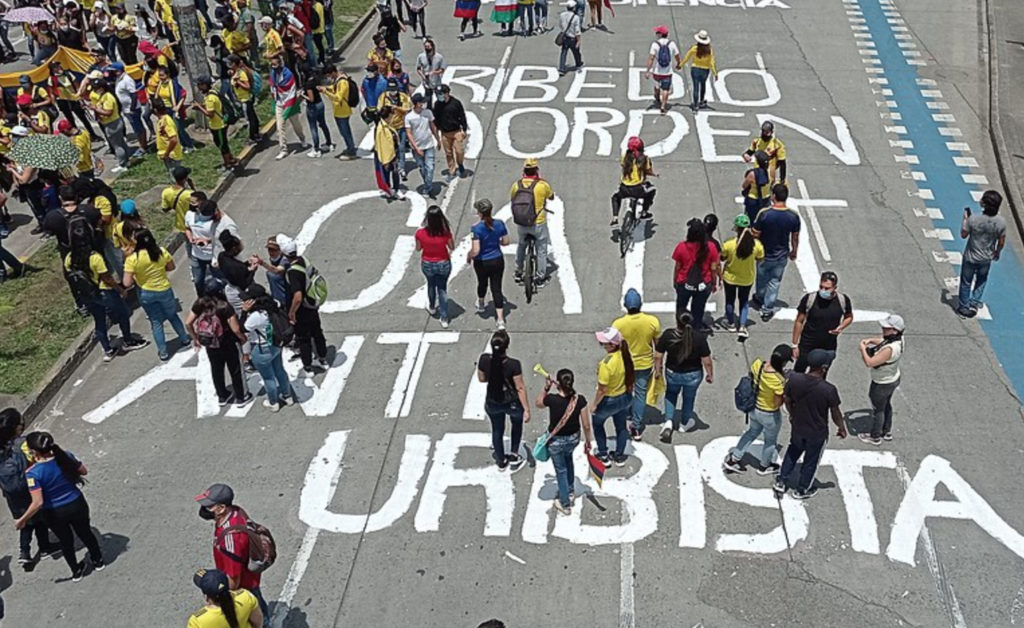 In the last month Colombia has experienced moments of great hope, as well as great sadness and uncertainty. On the one hand we are facing the largest mobilization in the recent history of the country, on the other hand we are facing a state repression without recent precedents.

The first mobilizations were organized to demand the dismantling of neo-liberal reforms that were proposed by the government, such as the tax and health reforms -both of which fell through – and the request for a universal basic income. These mobilizations generated a violent response from the police, which has now led to demands for the reform of the institution itself. All this has led to a governance crisis, with the resignation in a few days of three ministers (Finance, Foreign Affairs and Peace Commissioner) and the withdrawal of Colombia by CONMEBOL from the Copa America scheduled for June.

During the last month, in 763 municipalities -nearly 70% of the territory- there have been massive collective actions according to the Ministry of Defense; from the massive marches at the national level, sit-ins at the local level and artistic interventions, to the creation of the so-called points of resistance in which the community has taken over the streets of their neighborhood.

The working class has regrouped around the National Strike Committee, but feminist movements, students, indigenous movements, Afro-descendants, peasants, cab drivers, peasant organizations and small cargo truck owners have also participated, blocking the main highways. But it is the urban-popular youth who have become the protagonists of the mobilizations.

During the nights, however, police and paramilitary violence prevails. Large military operations have taken over the highways and neighborhoods of Bogotá and especially Cali. So far there have been 51 murders, of which 43 have allegedly been due to police violence, according to the NGO Temblores.

Why a social outbreak? What is behind the Colombian state repression? To try to explain the situation we put forward three hypotheses.

Uribism is a political project that emerged in the department of Antioquia in 1995 with the governorship of Alvaro Uribe and was consolidated in 2002 with his election as President of the country. Since then, it has participated in nine national elections and has only lost once, to Juan Manuel Santos. However, in recent years this project has entered into a social and political crisis.

The social policies implemented in the government of Iván Duque shot poverty from 35.2% in 2017 to 42.5% in 2020 according to the National Administrative Department of Statistics (DANE), which has implied a 10-year setback in poverty reduction. This situation was aggravated by the meager policies to alleviate the effects of lockdowns due to the pandemic, which focused on some subsidies for the popular classes and the creation of loan funds but did not take into account employment protection or the creation of a basic income for the most affected sectors. To this was added an ineffective vaccination plan that ended up sowing hopelessness and despair among the people.

On the other hand, there has been a political collapse of Uribism. The discourse that articulated society around a scenario of friends and enemies of the homeland in a context of war, similar to the one experienced by Colombia in its first governments, lost cohesion after the signing of the peace agreement in 2016 and the disarmament of more than 13,000 ex-guerrillas of the extinct FARC.

This crisis was reflected in the electoral polls for the 2022 presidential elections, where even before the outbreak, the leftist candidate reached 38.3% of voting intentions, while the candidate of the Uribista coalition that scored the best, reached only 11.8%. The unfavorable image of his political referent, former president Alvaro Uribe, was 66%.

A successful cycle of mobilization

The protests are part of a cycle of mobilizations that began in 2011 with the university demonstrations. These were followed by the Agrarian Strike in 2013, indigenous “Mingas” throughout the decade and new university mobilizations in 2018. November 21, 2019, when millions of people, essentially young university students and the middle classes filled the streets, was the prelude to the current social outburst.

The beginning of this cycle coincides with the opening of peace negotiations in 2012, which implied a democratic opening. The increase in mobilizations strengthened the different social movements that were simultaneously building more defined agendas. But in the absence of responses, social actors saw in the strike the opportunity to pressure the government to fulfill certain demands that had been postponed for almost a decade.

Social conflicts are not wars

Until 2016, police violence against protesters was overshadowed by the dynamics of the warlike confrontation with the guerrillas. But since the signing of the peace agreement, this has become visible. The Armed Forces, and in particular the police, which depends on the Ministry of Defense, maintains, despite the peace agreement, the national security doctrine based on the doctrine of an internal enemy.

In the current situation, police repression is undeniable, as denounced by organizations such as Human Rights Watch, Amnesty International and the United Nations. But repression is not an accident; it is the doctrine of Uribism. A sector of the population – the poorest – is harshly repressed in order to provoke violent confrontation and justify more exceptional measures.

In this framework, repression has two mechanisms, one in the field of direct violence, which involves wiping out neighborhood resistance points and road blockades, and the second in the field of information. The massive circulation of contents showing the deployment of this violence is a strategy to generate collective panic and demobilize the middle classes and the sectors of the center that at the beginning joined the strike. This explains the repression in the popular neighborhoods and not in the middle-class areas.

In Cali, after the repression, the public forces were withdrawn from several areas, which provoked an increase in looting of commercial premises. As a result, neighbors called to organize to defend themselves against the “vandals”. The incitement to the use of violence among civilians was premeditated, which was evidenced through social networks, WhatsApp chains, media, and demonstrations by the opinion leaders of Uribism.

In conclusion, the repression does not only seek to contain the protest, but it is an attempt by Uribism to relaunch its narrative. The images of war, the warlike language and the aggravation of the confrontation serve to strengthen the idea that the State is not facing a social protest but a “terrorist” threat. The handling of propaganda is the way to keep the country in a state of war, despite the fact that the war has already ended.

Sociologist. Professor at the Faculty of Sociology of the Santo Tomás University (Bogotá) and researcher in conflict resolution, peace and violence. Member of the Steering Committee of the Latin American Sociological Association – ALAS.