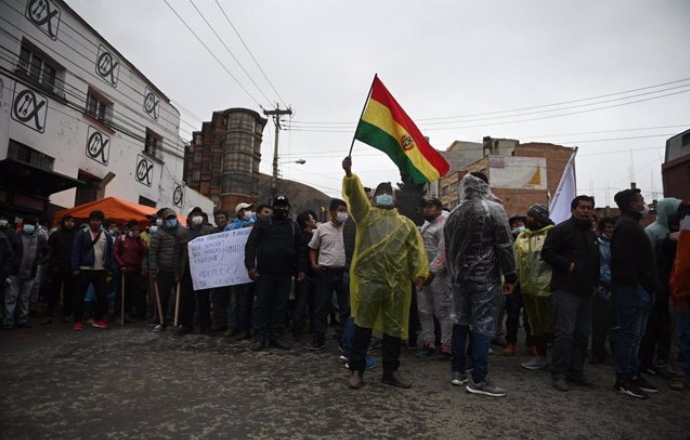 At the beginning of this November, various civic committees, trade unionists, transport workers and public universities, among other organisations, began a strike in the department of Santa Cruz. They rejected a new law aimed at increasing police control and political centralism. This conflict relate to the “MAS” government’s difficulties in generating consensus in the society: regional governments, social classes and indigenous collectives (mainly in eastern Bolivia) have not been able to find common ground to resolve their historical fractures with the state.

While the ruling party is permanently seeing ghosts, and is entrenched in the fallacious theory of the coup d’état, a large part of the opposition is reproducing a political discourse in line with McCarthyist anti-communism. The permanent conflict, connected to unresolved structural problems, are linked to the State itself. The Bolivian state acts according to the interests of the political force in power. This is a symptom of a State which is a mere instrument of power, and which generates distrust among citizens. A year after Luis Arce took office, there is a structural and a circumstantial dimension to explain the Bolivian political crisis that has intensified in the last month.

MAS has been the leading political force in the national and subnational elections of 2020 and 2021, and it dominates at the territorial level. However, it has lost its political hegemony at the national level. As a result, the government is finding it difficult to establish a political articulation between the state and the majority of Bolivian civil society, made up of popular sectors and middle classes not always aligned with the government. This translates into the difficulty of leading the country through a framework of ideas that includes the whole of society. This has led to socio-political conflicts when MAS tries to impose its positions.

The political crisis that took place in the country in the first half of November, which was expressed in a multi-sectoral strike and street blockades, was encouraged by the government’s attempt to establish a regulatory architecture in the name of the “National Strategy to Combat the Legitimization of Illicit Gains and the Financing of Terrorism”. A measure that could affect various informal popular sectors, middle classes and entrepreneurs, because any movement of money, regardless of the amount, could be considered suspicious of being illegal, and thus causing uncertainty.

In the face of this reality, the MAS has singled out a single social organization, the Civic Committee of Santa Cruz, as the main party responsible for trying to politically destabilize Arce’s government. In this way, the ruling party intentionally simplifies the current dimension of the conflict for ideological convenience and limits the possibilities of establishing a space for deliberation and understanding between the national government and the mobilized sectors.

Bolivia has, broadly speaking, three contradictions, or structural fractures, that the State has not been able to resolve. All this despite a Plurinational Political Constitution approved in 2009 which, according to the MAS narrative, would be the panacea to solve all historical conflicts: the ethnic-cultural, the political-spatial and the social class differences. These conflicts are responsible for deep-rooted problems in the Bolivian society, such as racism, political centralism, regionalism, social exclusion and distrust in political representation.

According to Latinobarómetro 2010, one year after the approval of the Political Constitution of the Plurinational State (2009), trust in political parties reached 17%. A decade later, according to the same index, support has decreased by one point. The great distrust towards political parties in Bolivia, however, has not affected citizen participation, which in the 2020 general elections was almost nine out of ten voters, with an electoral support for MAS of 55%.

By way of conjecture, this contradiction is due to the fact that voters supported the winning party in search of political certainty and in the hope of overcoming the economic crisis after the pandemic and a transitional administration (Jeanine Áñez) plagued by misguided policies, corruption and political turbulence. Nonetheless, the discord between representatives and the represented still manifests in worrying distrust towards political parties.

Bolivia is a difficult country to understand because it does not have a state project with the capacity to mitigate the recurrent social conflicts. The corporate interests of the parties are above the public interest. Populist emotions and sectoral pettiness are common currency, which erodes any political process that aims to strengthen the role of the state as guarantor of compliance with the rules of the game, and avoids its intimidating behavior of private life and citizens’ rights. This has become evident with the conflicts in the Bolivian streets in the first half of November.