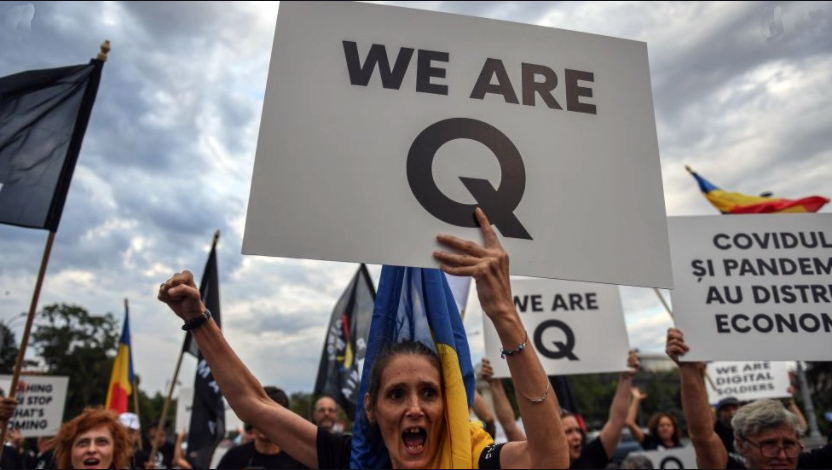 A Peruvian criminal court recently issued an order accusing Bill Gates, George Soros and the Rockefeller family of creating the COVID-19 virus. In the official document, the magistrates assumed the conspiracy theory according to which business elites and global policies planned the pandemic in order to control the population through vaccines and establish a “new world order.”

A few days earlier, a group of Donald Trump supporters violently stormed the U.S. Capitol, disrupting the Congressional session that was to certify Joe Biden’s victory in the 2020 presidential election. The iconic image of the assault was that of Jacob Anthony Chansley, a man with a painted face and dressed in animal skin and horns.

Chansley calls himself “the shaman” of QAnon, one of the groups that participated in the Capitol break-in. This movement is made up of followers of a conspiracy theory promoted by the U.S. far-right that claims Trump is leading the resistance against the political elites, businessmen and media who profess Satanism and practice pederasty.

Theories like QAnon have multiplied in Latin America in recent decades. Although they rely on fake news disseminated massively through social networks, they are presented as “alternative information” and have an increasing impact on political systems, even affecting democratic institutions.

These theories consider that secret conspiracies are behind some of the most important events in history, and like fake news, are found in Internet forums, social networks and instant messaging applications: ideal channels to be disseminated.

It is a phenomenon that is difficult to define. According to Peter Knight, it can apply to anything from elaborate theories to mere suspicions about hidden agendas. Jack Bratich points out that one of the main characteristics of these theories is that they are labeled by society as “conspiracy theories” with the intention of marginalizing and dismissing them. As a result, their believers tend to reinforce ties among themselves in order to seek identity reaffirmation in the face of a social majority that disdains their discourse.

there have always been conspiracy hypotheses that seek to shed light on historical events, in exceptional circumstances such as the current one, they spread more effectively. Click To Tweet

In recent months, the world has witnessed unusual historical events such as the COVID-19 pandemic, the start of vaccination to combat the virus, or the assault on the Capitol in the United States. Although there have always been conspiracy hypotheses that seek to shed light on historical events, in exceptional circumstances such as the current one, they spread more effectively.

Some of the most recognized theories have emerged at critical junctures such as the French Revolution, the Bolshevik Revolution, the Crash of ’29, the World Wars, the Cold War, the Kennedy assassination, the HIV/AIDS pandemic or 9/11, to name a few. Simple explanations such as these provide emotional reassurance to those who believe in them because they argue that the traumatic events that are occurring have a planned origin, i.e., they are intentionally provoked within the framework of a hidden plan and not by factors beyond their control. Moreover, they acquire greater legitimacy when they are given credibility by the mass media itself.

In a region as convulsed as Latin America, conspiracy theories have played an important role. Those with a global impact have coexisted with other more homegrown ones, such as the one that claims that, after the Soviet occupation of Germany, Adolf Hitler did not commit suicide but went into exile in Argentina, or one of the most recent ones that claims that former Peruvian president Alan García faked his death to escape justice.

For Mark Fenster, conspiracy theories can be effective in challenging the established order, simplifying complex political and historical events. However, at other times they put the democratic system at risk because they can be used by extremist political groups to defame their rivals, condition electoral processes or stigmatize certain ethno-cultural, religious or political groups.

As pointed out by Karl Popper in The Open Society and its Enemies, political movements with authoritarian or totalitarian inclinations often disseminate these theories as an additional argument to discredit, persecute and repress the opposition. These tales of hidden intrigues reinforce in their followers a Manichean vision of the world in which a minority (it can be a political, business or media elite, or an ethnic-cultural or religious group), the “bad guys”, are the ones guilty of conspiring in some way or another against the country or humanity from positions of power, while they, the “good guys”, lead the resistance.

Dictatorships and populists have resorted to conspiracy theories

In Latin America, both military dictatorships and populist movements have resorted to conspiracy theories to attack their opponents, dividing society into two antagonistic political camps. In the 1970s, far-right academics in Argentina claimed that Jews were maneuvering a plan to transform Argentine Patagonia into a state similar to Israel.

At the beginning of the 21st century Chavista sectors in Venezuela accused the opposition of conspiring internationally with the United States and Colombia to provoke the assassination of President Hugo Chávez. In 2016, during the plebiscite campaign about the peace accords in Colombia, extremist groups linked to the party of former President Alvaro Uribe spread the false theory that the negotiations between the government of Juan Manuel Santos and the FARC were a maneuver of “Castro-Chavism” to establish a “gay dictatorship” in the country.

In all cases these theories were used to point out who the enemies of the country are and, in this way, legitimize actions aimed at confronting them. As Carlos Malamud points out, these discourses are not “conspiratorial” because they warn of the presence, sometimes real, of groups seeking to interfere in national affairs or subvert the established order, but because they are assigned a much greater influence and capacity than they have.

2021 is a year with many electoral processes in Latin America in which conspiracy theories, global or regional, will play an important role. This is a crucial issue, although complex to analyze and difficult to combat. They are complex to analyze because there is a risk of labeling dissident discourses as “conspiracy theories” just because they question the established order. They are difficult to combat because those who believe in these types of theories do not do so because they consider them reasonable or proven, but because they reinforce a sense of individual or collective belonging to a particular group.

Political scientist. Professor at Jorge Tadeo Lozano Univ. (Bogotá). PhD in Rule of Law and Global Governance and Master in Latin American Studies from the University of Salamanca.