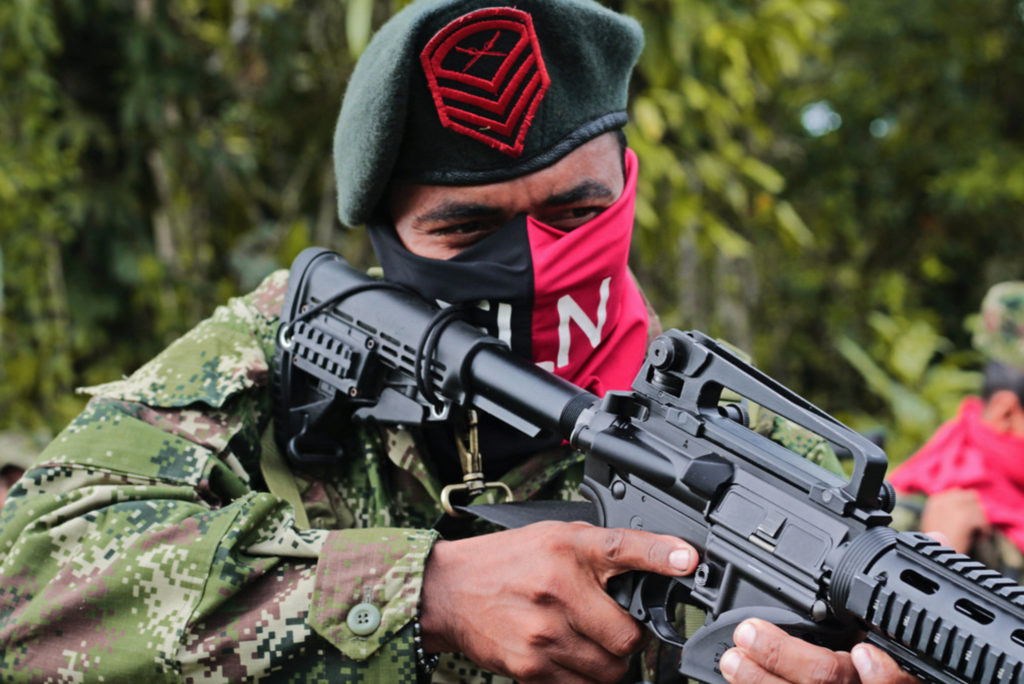 The National Liberation Army (Spanish: Ejército de Liberación Nacional, ELN) carried out its first public action on Jan. 7, 1965, when Simacota, a small municipality in the department of Santander, was taken over by a small group of guerrillas, which claimed their revolutionary ideology inspired by the Cuban Revolution. Some of these were part of the small contingent of Colombians, who had lived a revolutionary experience in Cuba. From there, they exported the idea that a focus of  guerrilla activity, opportunistically conceived as a seed of insurgency, could precipitate the very idea of revolution.

Thus, it was conceived that the corridor that included the city of Barrancabermeja and the municipality of San Vicente del Chucurí offered the ideal conditions for the formation of a guerrilla: The presence of foreign capital with an extractive essence, due to the location of the oil industry. Unionism and university students’ movements were elements that are present in their initial supporting bases.

However, the most profound ideological imprint would be developed with the arrival of the guerrilla, albeit for a short period of time, given the tragic outcome of the sociologist and priest Camilo Torres toward the of 1965. He would be the defender of the overlapping Marxist postulates that the guerrilla raised, with the theology of liberation, which would be so important for the development of its ideological corpus, especially throughout the 1970s.

Since its beginnings, the ELN has been going through important difficulties as a result of its operational weaknesses, its disenchantment with the authoritarian leadership of Fabio Vásquez Castaño, its maximum leader. Also because the guerrilla is on the verge of disappearing. In 1973, an operation took place around the Antioquian municipality of Anorí, which left behind the loss of two thirds of its structure. Reasons for which the guerrilla remains only on peripheral enclaves, far from government pressure, especially from the departments of Arauca or Norte de Santander.

Thus, in 1980, one of ELN´s main armed fronts was established: The Domingo Laín Front. As the spearhead of the so-called Eastern War Front, this front saw notable growth, both in men and resources, thanks to oil discoveries in the region around the Caño Limón-Coveñas oil pipeline. A critical infrastructure that feeds the guerrilla with income, due to the activism on the extractive capital present in the region.

Since then, the ELN—together with the FARC-EP—has been the predominant actor not only in Arauca, but in other departments, like Norte de Santander. Not only the two guerrillas fought against each other during the 1990s, but they also had to fight the paramilitary project that occurred from the late 1990s and until the mid-2000s.

Beyond other scenarios with a traditional ELN presence, such as the departments of Antioquia, Bolívar, Chocó, Cauca, and Nariño, eastern Colombia—in particular Arauca and Norte de Santander—has emerged as a true stronghold for the guerrillas. The ELN´s most powerful structure is located there nowadays, while one of the most belligerent positions of the guerrilla is at the head of it: commander Gustavo Aníbal Giraldo, also known as Pablito.

He is one of the most prominent voices distancing the movement from the negotiating attempts in the last decade. When it came to generating trust mechanisms or certain nods that would suggest the guerrillas’ willingness to negotiate, the Eastern War Front did its thing. That is, showing itself as the most active and operative structure in terms of combat, armed actions and kidnappings.

The functioning of the ELN

This situation only showed three elements that made impossible any peace negotiations. First, the functioning of the ELN, beyond any central power and command hierarchies, operates in a decentralized fashion, resting upon interests and power relations with a local character. Second, the ELN has never been clear about its position or the road map with which to approach a space for dialogue, such as that effectively carried out by the FARC-EP.

Third, there is a generational gap between an old political command located in Cuba today and a new, younger and more belligerent generation of leaders, whose “action on the ground” is far from the perspective of the classic guerrilla command.

Today’s ELN has little to do with the ideological purity that once characterized it. Its higher level of violence, its proximity to the coca and gold business, and its criminal stamp make it difficult to be perceived as an armed group with political motivations that aspires to a political transformation. For years its activism has been gaining momentum, its scenarios of influence have grown substantially and its troops have gone from 1,800 elements in 2010 to more than 3,000 today, establishing itself as a hegemonic actor in some scenarios where the FARC-EP demobilized.

Furthermore, today—and for a long time— there is full evidence of the existence of ELN camps at the border with Venezuela. This indirectly implies that the Bolivarian regime has an ally in states such as Táchira or Apure, which have a strong opposition component. As a parastatal actor, the Colombian east offers the ELN immeasurable revenues from extortion, smuggling and drug trafficking, consolidating it as a guarantor of the criminal activity in this region. There are even testimonials that assure that there is quasi-formal collusion between the ELN and the Bolivarian National Guard or the national intelligence system.

Regardless of the veracity of this, it can be presumed that the guerrillas and the government could have a mutually beneficial agenda that, rationally, they might be trying to maintain. This is true even in a hostile context in which there are other criminal groups of lesser significance and in which other structures are added, such as the FARC-EP dissidence led by prominent guerrilla leaders Iván Márquez and Jesús Santrich.

In conclusion, the ELN is currently in a comfortable situation in which it is doing a  territorial and operational readjustment, with the back of Venezuela. This also thanks to a withdrawal strategic move, while obtaining resources that provide to the guerrillas and which, on the other hand, discourages any negotiating framework.

Although the Venezuelan Government doesn’t recognize the ELN as its ally, it does find potential support with it, especially due to its disagreements with the Colombian government of Iván Duque. A president that, needless to say, delays and torpedoes any efforts in favor of the peace accord with the FARC-EP, while it endorses a confrontation policy in which there is only one usual loser: the civilian population.