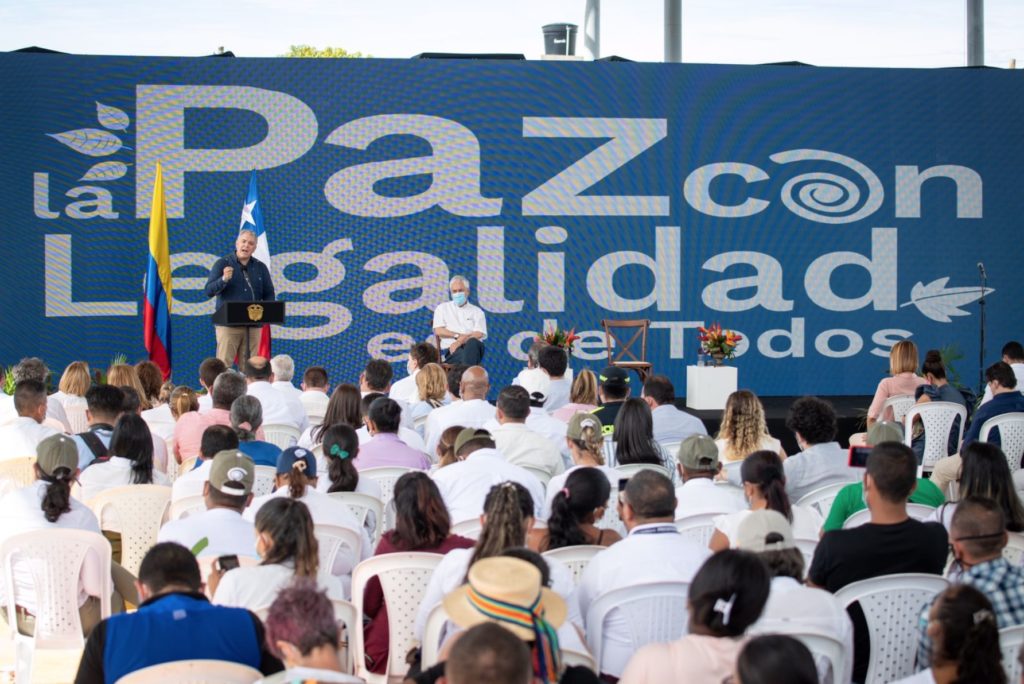 November will mark five years since the signing of the Peace Agreement between the government of Juan Manuel Santos and the guerrillas of the extinct Revolutionary Armed Forces of Colombia (FARC). This being a good time to take stock, a fair conclusion would be to conceive Colombian peace as an unfulfilled peace. A peace that has found in the current government of Iván Duque , a textbook saboteur who through non-compliance, delays, and resistance, has blurred the implementation process that was initially expected.

In this regard, the years 2017 and 2018 should have been the first steps in the construction of a lasting peace. The priority should have been the materialization of the promises of laying down of arms and the definitive ceasefire in addition to the development of the regulatory and institutional component that would favor implementation. In other words, it is from 2019 onwards that the Agreement should have assumed its most purely transformative dimension, removing the structural, symbolic, and cultural conditions that supported violence for five decades.

However, if one observes the latest monitoring report conducted by the Kroc Institute of the University of Notre Dame, it is possible to observe how in 2020, for example, the level of progress, as was the case in 2019, was barely 2%. This resulted in a total progress in compliance of only 28%.

Regarding the Integral Rural Reform, which is related to the first point of the Agreement, the delays in the conformation of a National Land Fund that allows redistributing land tenure in a more democratic and productive way continue unresolved. This is much in the same way that any glimpse of strengthening local democracy, for the moment, has been barely reduced to a declaration of intentions. Indeed, according to the report published last May, only 4% of the total of the 104 provisions contemplated in the Agreement had been fully completed to date.

Another of the aspects that has faced significant difficulties in terms of implementation is related to the fourth point, which is focused on the Problem of Illicit Drugs. To this effect, the Integral National Program for the Substitution of Crops for Illicit Use has experienced significant delays in its implementation. This is in addition to lacking effective spaces for dialogue with civil society. And even though the area under coca cultivation has been reduced to less than 150,000 hectares, cocaine production levels have increased, and the geography of violence remains the same as before the signing of the Agreement. That is, 90% of coca production is concentrated in just nine departments of the country. These are the same areas where, so far, 90% of the more than 300 violent homicides against ex-combatants and 75% of the more than 1,400 violent homicides against social leaders have been concentrated, according to Indepaz and the United Nations.

In contrast, the second (political participation), third (end of the conflict), and fifth (victims) points are more fortunate, although they are not fairing much better. Regarding the second point on political and social participation, an official report in May 2021 showed that out of a total of 94 provisions foreseen, barely 12% of them had been fully satisfied. This shows that very little progress has been made in the aspiration to enjoy a more inclusive and effective democracy. In fact, there is notable governmental resistance towards promoting the political and democratic representation reforms envisaged in the Agreement, which has led the Council of State and the Constitutional Court to oppose the Executive in many instances.

Apparently, the point that has progressed the most has been the third one, which is related to the end of the conflict. This is because it integrates the entire component of demobilization, the surrender of weapons, and the reincorporation into civilian life. Out of a total of 140 provisions, 49% are completed, 19% are in the intermediate phase, 19% are in the initial phase, and only 14% have yet to begin.

However, while 97% of the component related to the cessation of hostilities and the surrender of weapons is satisfied, there has also been ample progress in the process of reincorporation into civilian and political life (59%). On the contrary, the greatest delays lie in the guarantees for the security of ex-combatants (17%) and comprehensive action in support of demining, which is in the process of being fully implemented.

To this effect, the lack of security guarantees and procedural delays hinder a reincorporation process that incorporates a very high agrarian vocation that contrasts with a questionable reality. In October 2021, most of the ex-guerrillas were still working on leased land, and the productive projects in favor of the guerrilla population have not even reached half of the demobilized ex-combatants.

It remains to analyze the implementation of the last point of the Agreement, regarding victims. The Integral System of Truth, Justice, Reparation, and Non-Repetition has been fiercely opposed by the current government. From the beginning, there was a special delay in the approval of the Statutory Law of the SJP. Although by February 8, 2019, Congress had completed the procedure of referral to the president for approval, two days later he presented objections to the rule that delayed its entry into force until June 6, 2019. This entry into force, since then, has been accompanied by a reduction in its funding that has reached 30%. This significant cut again portrays the current Duque government as an actor that hinders rather than enables a correct implementation.

In conclusion, these figures invite pessimism and a position of clear confrontation with the official position of Uribism. The only call for optimism lies in the fact that their position will surely disappear from the Casa Nariño in the presidential elections that will be held next year. Let us hope that this is the moment where a government can come to the presidency of Colombia that is  worthy of a Peace Accord that despite its difficulties, as the prestigious University of Notre Dame recognizes, is the most ambitious and complete of those signed in the last decades.