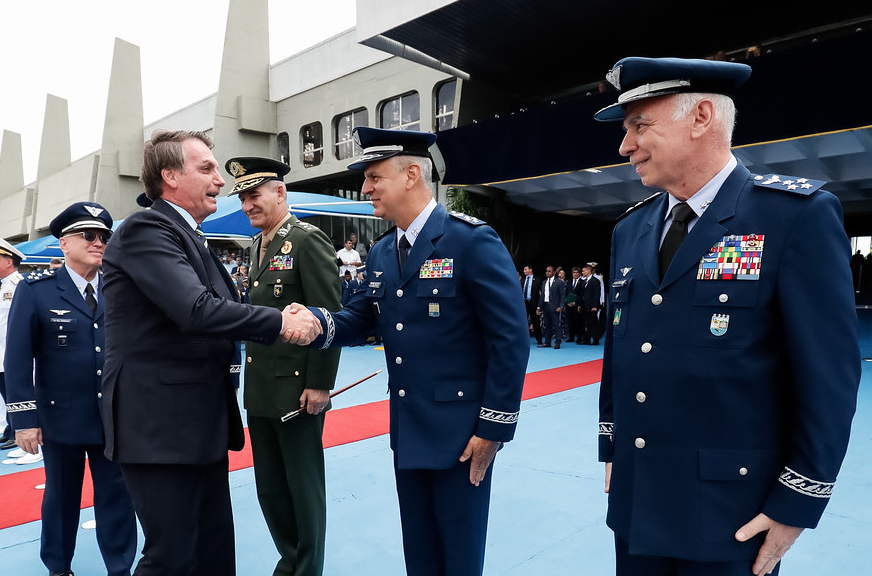 Since the enactment of the Brazilian Constitution in 1988, the authoritarian remnants of the civil-military dictatorship have been a source of criticism. It ranges from the maintenance of the intelligence apparatus that was consolidated at the time to the use of the National Security Law to persecute opponents. This is in addition to the permanence of the military presence in the state apparatus and in the political decision-making process.

With the arrival of Jair Bolsonaro to the presidency there has been a serious deepening of this process. Without the need for tanks, the military has openly and shamelessly returned to the decision-making table, to well-paid positions, and to the spaces that redemocratization seemed to deny them.

In this process, one of the aspects that attracts attention is the co-optation, and corporate distribution of civilian public positions in the public administration among active or reserve members of the military.

At the beginning of 2019, Bolsonaro appointed as Minister of Defense a military officer, General Fernando Azevedo e Silva. In doing so, he broke with the tradition of appointing a civilian to this position since its creation in 1999.

In February 2020, for the first time since the resumption of democracy, a general was put in charge of the Civil House, joining the already occupied Government Secretariat and the Institutional Security Cabinet. By the end of 2020, about half of the ministers in the federal government were members of the military. There were more than 6,157 active or reserve military personnel working in the civil service.

In addition to conferring access to political power, these positions often contribute to a significant economic increase in the salaries of those who hold them.

A general in charge of health care during a pandemic

In this context, the case of General Eduardo Pazuello is representative. As an active military general, he was appointed Minister of Health during the Covid-19 pandemic, despite having no experience in the area. With him, more than 20 military officers occupied key positions in the department.

During his administration, the Ministry of Health opposed confinement measures, the use of masks, and encouraged the adoption of harmless and dangerous treatments, such as hydroxychloroquine.

As congressional investigations have revealed, numerous barriers to vaccine procurement were created and pandemic data, such as the number of cases and deaths, were “disappeared” from public access, hidden from society by the Ministry. During his tenure at the head of the department, about 260 thousand deaths from Covid-19 were recorded in the country, in addition to tragedies, such as the 28 deaths in Manaus due to a lack of oxygen tanks.

Beyond the disastrous management of the pandemic response, the case of General Pazuello reveals the scope of military corporatism and its potential to leave the most obvious illegalities unpunished.

Shortly after leaving the department, Pazuello, with a new position in the General Secretariat of the Army and after denying before the National Congress the irregularities in his management, participated (without a mask) in a political event alongside Jair Bolsonaro. All of this despite the prohibition for “active military personnel to publicly manifest themselves, without being authorized, on matters of a political-partisan nature”, as established by the Army Disciplinary Regulations and the Military Statute.

In light of this, the Army opened an administrative case to investigate his conduct. Although some military officials publicly criticized the general’s conduct, Pazuello was not sanctioned, and the investigation was halted altogether.

Some senators regretted the Army’s decision not to punish the general and the former Minister of Health. Even in the face of such reactions, the Brazilian Army not only failed to punish Pazuello, but also established a 100-year secrecy on the investigation related to the episode.

The Pazuello case reveals the importance of reflecting on the role and responsibility of the military in the political sphere. Especially in a context in which more and more people are becoming involved in political life and in which numerous irregularities come to light, such as those revealed by the investigation into the Senate’s Covid-19.

In addition to the prohibition of public political demonstrations, the Military Statute provides for the automatic transfer to the paid reserve (retirement) when the military “exceeds two years of separation, continuous or not, accumulated by the exercise of a public office or temporary civilian public employment, non-elective, including indirect administration”.

Restricting this hypothesis, Bolsonaro in June 2021 issued a decree that confers military character to positions and functions “exercised by military” in various bodies such as the Supreme Court (STF), the Attorney General’s Office (AGU), the Ministry of Mines and Energy, and even state-owned companies. By doing so, it allows, in practice, active military personnel to remain in these positions indefinitely, expanding and further aggravating the process of occupation of administrative and political spaces by members of the Armed Forces.

The necessary regulation of the functions of the military

As a reaction to this process, initiatives have emerged such as the Proposed Amendment to the Constitution (PEC) 21/21, which prohibits active military personnel from holding civilian positions in the public administration, whether in the Union, the states, the Federal District or the municipalities.

Currently, the Constitution does not address the presence of military members in civilian positions, although it restricts their eligibility in similar terms (retirement from the career for those with less than ten years of service and transfer to the reserve for those with more), which demonstrates its concern about the political involvement of active military members, even as a way of safeguarding the Armed Forces themselves.

This concern is not unfounded. The militarization of government, public administration and politics threatens democracy and human rights themselves, as demonstrated by the military’s management of the Covid-19 pandemic in Brazil.

It is essential to regulate and restrict the participation of the active military in civilian positions and functions in the administration and government, otherwise the subversion of the role of the Armed Forces will be naturalized and the damage to the balance of civil-military relations caused by the most militarized government since the end of the military dictatorship will become permanent and irreversible.