On February 6 and before no less than 25 candidates from left to right, the Costa Rican electorate entered the “cereal aisle” to end up realizing that, despite the diversity of packaging, there were no major differences. The chosen ones were a candidate of the populist and anti-systemic right, Rodrigo Chaves, and a former president, José María Figueres, who represents a party with a center-left tradition and social-democratic bases, but which today can be described as center-right.

The choice between a candidate accused of corruption and complicity in all the country’s ills, and another one with no experience in public administration and accused of sexual harassment, implies a particularly difficult decision for the Ticos (informal way to refer to Costa Ricans) since it means choosing more of the same or trying a new flavor such as populism, with all the risks that this implies, with an inexperienced, messianic, arrogant, authoritarian and boastful candidate.

The political context is complicated. Costa Rica has an unpopular government that has carried out an ineffective fight against historic poverty. Traditional Costa Rican institutions and values of solidarity and social justice have been under attack, while the increasingly unequal society is tired and worn down by pandemic and corruption. This has been fertile ground for Trumpism to germinate in the country.

As it happened in the United States, Poland, Brazil, and El Salvador, a messiah has appeared in Costa Rica who exclusively has the solutions to solve the country’s problems. Leveraging on almost virtuous management of social networks and loaded with half-truths, Chaves presents himself as a viable alternative and capitalizes on the discontent.

The democratic system is at risk when the people, anxious and fickle, lend themselves to the populist manipulation of half-hearted speeches that invoke change with siren songs. The temptation of a strong hand at the helm is great and makes us temporarily forget that the solution to the problems of democracy is more democracy. However, change for the sake of change never leads to anything good. Just look at the disasters and worsening crises in countries where Trumpism has taken hold.

The reality is that this firm hand must operate in a system full of counterweights that keep it in check. However, the defense against the dismantling of institutions is not always effective, since the messiah invariably has the support of elements that, inserted in the institutions, become agents of change. And therein lies the main danger.

Trumpism is characterized by giving voice to extremism, sowing polarization, constructing a parallel reality, and undermining the institutional foundations and morals on which the rule of law society in which we live rests. And in this context, the meticulous use of social networks allows it to manipulate sectors of society to favor the interests of the messiah and his followers.

Another characteristic of Trumpism is the blind loyalty of the followers despite the blatant lies of their leader. This has been evidenced by the electorate’s timorous reaction to Chaves’ series of unsubstantiated accusations. This is a recurrent attitude among followers of populist leaders who want to cover the sun with a finger while idolizing the boastful leader.

How far can cynicism and deception go? Is it that, like Trump himself, Chaves’ apparent professional success has given him license to do and say whatever he wants regardless of the consequences?

Due to his profound ignorance of public office, Chaves allows himself to make absurd and inflammatory assertions and proposals that are passionately embraced by an increasingly weakened people. This vulnerability leads us to think that Costa Rica has ceased to be that idyllic nation of citizen solidarity and justice, and institutional respect, to become a nation ― polarized and divided ― of questionable values.

This sad phenomenon has deep roots. The inability of successive governments to solve the most basic problems and the mismanagement of the treasury have generated the conditions for the development of a Tico trumpism.

Finally, the press is not exempt from blame either. The inability to question unfeasible proposals is combined with the circulation of unsubstantiated content. And just like the American press, the Costa Rican press irresponsibly oxygenates the message of discord, simply because it sells. 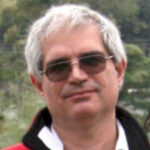 Economist and officer in banking and finance in the area of risk and analytical applications. Postgraduate degree from Ohio State University.