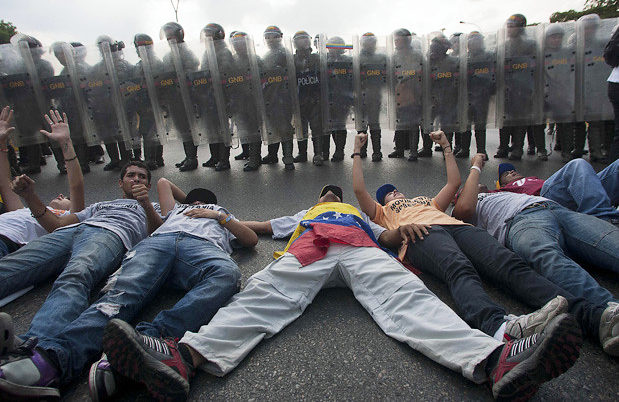 It is never too late for critical Latin American intellectuals to recognize the authoritarianism of the Venezuelan government. There are already enough reasons for “progressive” academics to publicly assume the “closure” of the regime and take this fact into account when analyzing possible ways out of the “catastrophic stalemate” established in Venezuela. Remaining silent, or preserving a formal support (sometimes uncritical) to the regime of Nicolás Maduro does not help to solve the impasse.

Criticism of the Venezuelan process

The issue is difficult to address. In the early years of Hugo Chavez’s “Bolivarian Revolution” many beautiful and exciting things happened in Venezuela. A new Constitution expanded social rights and opened the space for mechanisms of direct democracy and popular participation. Social investments and mobilization campaigns significantly reduced poverty, eradicated illiteracy and expanded access to health care.

Thousands of spaces for participatory democracy were built, such as the Communal Councils, which in their first years counted with the participation of the majority of the population, including the opposition. In the field of international relations, the Bolivarian Alliance for the Peoples of Our America (ALBA) tried to build an alternative to U.S. domination in the Caribbean region.

In addition, there is a great fear that, in criticizing Chavismo, one may fall into arguments that should be avoided at all costs. I will mention at least two bad arguments that complement each other. The first is the accusation of “populism” that is always hurled against any leader who seeks a direct relationship with the masses by circumventing the liberal mechanisms of representation.

Populism is an empty and combative concept that is generally used to delegitimize the adversary. It barely disguises the fear of the people who accuse someone of being a populist, nor  the demophobia of those who expect politics to always be channeled through the institutions of liberal democracy. Here I come to the second bad argument against chavismo which is the limited vision of democracy. For many this is reduced to rules and procedures to organize the political dispute between elite groups. Popular participation, the smell of the people, mobilization, street politics is the terror of these people.

The end of democracy

It is understandable then why we are so afraid to criticize Chavismo. Most of its critics have been elitists and authoritarians for more than two decades, and they argue against it from these perspectives. Thus, for a long time, we have ignored or quietly criticized serious problems such as the deepening dependence on oil or the increasing militarization of governmental cadres.

In any case, reliable elections verified by international bodies were held, opposition spaces were preserved (almost all major Venezuelan newspapers and TV channels at the time), and Chavism was effectively legitimized by the majority vote.

In 2015, an authoritarian drift began. Following the demise of the Chavista leader in 2013 and the worsening of the economic crisis resulting from the fall in oil prices and serious problems in the management of the State, the opposition obtained a qualified majority in the parliamentary elections (two thirds of the Assembly). With this, they could reform the constitution and block the government, signaling the beginning of the end of the Bolivarian process.

The government then opted to react and apply successive “coups” through the institutions in order to survive, maneuvering through the institutional loopholes it had and the support it still had in the state apparatus in the Executive, the Judiciary and the Armed Forces. Successive distorted interpretations of the Constitution were adopted to keep Chavismo in power.

Among other things, the election of opposition deputies was annulled to prevent the opposition from maintaining a qualified majority in the legislature; all subterfuges were used to delay and subsequently  avoid the calling of a recall referendum, for which sufficient signatures had been collected; and a “Constituent Assembly” was called which went nowhere just to circumvent the opposition-majority legislature.

Thus, Venezuelan democracy degenerated. Even being an advocate of the thesis that democracy can assume many forms, that it is much more than institutions, I cannot accept that democracy means “government of a minority”.

And that is what Chavismo is today, a regime that maintains itself in power representing the minority of the Venezuelan people, through illegitimate elections in which the majority does not agree to participate. If in democracy a new majority is formed, the new minority must recognize its defeat. Since 2015, Maduro has shown no signs of considering this possibility.

The issue is that the opposition has not been able to constitute a reliable alternative after several coup attempts and episodes of non-recognition of the rules of the game also on its part. It does not help that the opposition is associated with Trumpism and Bolsonarism, advocates a military invasion of its own country, and is led by a self-proclaimed “President”. On the other hand, there is no way out for any left-wing or effectively popular opposition.

Dialogue as the key to overcoming this endless crisis

In a macabre dance between a Chavism that has already shown that it will do anything to stay in power (and maintains military support) and several oppositions that are torn between coupism, abstentionism and eventual dialogue, Venezuela is living in a “catastrophic stalemate”. In this situation in which diametrically opposed forces are blocking each other, a humanitarian crisis is advancing with hunger and flight across the borders of Colombia and Brazil and precarious boat crossings to Trinidad and Tobago.

The Venezuela issue seems to have become a never-ending crisis. It is difficult to find a way out given the widespread economic and health crisis, the deep polarization, the sabotages and the seditious role of destabilizing external actors such as Trumpism, the Organization of American States, and the governments of Duque and Bolsonaro.

If there is any possible solution, it will be in the long term: dialogues, dialogues and more dialogues, mediated by minimally balanced international actors. Hopefully, at some point in this history, all the blocked potential of popular participation will be retaken, all the accumulated participatory learning will be expressed, and the dormant flame of revolutionary hope will be found again somewhere in this beautiful country.