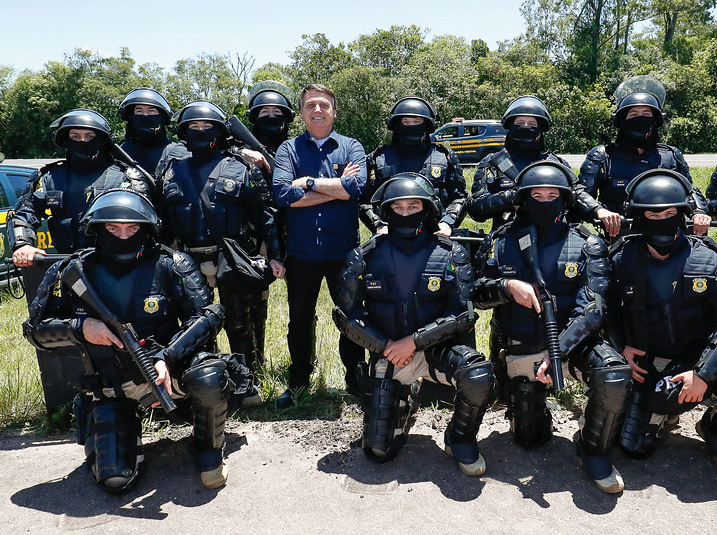 Jair Bolsonaro will attempt a coup d’état. Will he be victorious? Probably not. But it is terrible that we have reached this point. It is essential that all democrats are clear about the imminence of the coup: opinions, such as “institutions work” (still nurtured by some political scientists) only bring us closer to a catastrophe. Bolsonaro will try to stage a coup, and the priority now is to ensure that his plan goes wrong.

It is a process that will be completed in 2022, and a key (but not decisive) date is the demonstration planned for September 7, for “freedom”, “military intervention”, “against the STF”, “for the printed vote” and who knows what else. This is an act of provocation, and it is important that we democrats do not accept the provocation. Let them shout alone. According to them, it is the “September 7 of the people”. And what are we? Are we not part of this people, do we not have the right to celebrate Independence Day, our national holiday? Of course, we do, and we are the majority. But let’s avoid provocations. All they want is to find are justifications to shut down the regime.

Why and how will the coup be carried out?

I refer here to the greatest Brazilian political scientist, Wanderley Guilherme dos Santos, and his classic 1962 book “Quem dar o golpe no Brasil?” The actual work is much simpler, of course, and there is no need for a Wanderley to do it, I can do it myself.

Bolsonaro will stage the coup because he has always been an authoritarian and knows that his electoral chances are slim. He has adopted a hysterical and paranoid behavior that denotes his political isolation. With the economy weakened, unemployment, inflation and high interest rates, drought, energy crisis in sight, and the Covid-19 pandemic criminally managed and still far from its end, Bolsonaro is unlikely to win the 2022 elections (if any). Lula imposes himself as virtually elected, catapulted by the resumption of his political rights, by the memory of better times, and by the dispersion of the persecutory bias of Operation Lava Jato.

As the electoral path seems blocked for him, Bolsonaro will have to find other ways “outside the four lines of the Constitution” (according to his recurrent expression) to pursue his regressive project to return to an imaginary harmonious and Christian Brazil, in which communists were tortured, and women, “blacks,” and “faggots” accepted an inferior place in society without protest. A project centered on a “messianic” figure convinced of his predestination, who mobilizes the middle classes resentful of their loss of status, the upstart elites, the backward sectors of agriculture and mining, and part of the most precarious sectors of society. It looks like fascism, it smells like fascism, it tastes like fascism. And it really is fascism.

Bolsonaro will stage the coup in the following way: his usual modus operandi is to produce chaos, elect new enemies, and polarize. In this way, he keeps his supporters mobilized and increasingly armed. They harass Supreme Court ministers, senators, journalists, the left, indigenous, black, and feminist movements. Meanwhile, they continue to arm themselves.

At best, Bolsonaro will try to avoid the elections by producing chaos as a justification for a “military intervention”. Most likely, Bolsonaro will be able to produce something more concrete after his electoral defeat. He will allege fraud, lack of confidence in the electronic ballot box, and may well decide to canton himself in the Planalto Palace. The supporters will produce military police riots in the states, eventual insubordination by low-ranking sectors of the Armed Forces, and at the top, invasions to the National Congress and the Federal Supreme Court.

It has everything necessary to go wrong: there seems to be no social base. But hell is in the details.

Why can the coup succeed?

There is no majority popular support for a coup attempt. There is no majority in the Federal Senate (already from the amorphous and conservative Chamber of Deputies one can expect anything), no support in the Supreme Court, or among state governors. The big media are clearly opposed this time to such an adventure, as well as the Catholic Church, a good part of the businessmen and even the bankers. It has everything necessary to go wrong.

However, it is worth mentioning that Brazilian institutions are in tatters and the state is increasingly occupied by the military since the 2016 coup. It also happens that Bolsonaro has his supporters: adventurous businessmen, parts of the agribusiness, truckers’ associations, the summits of evangelical churches, shooting clubs, and paramilitaries. Furthermore, he has the support of important contingents of the military police (who may decide to answer directly to him and no longer to the governors). Potentially, the Armed Forces and the Federal Police may prove to be willing to follow Bolsonaro in his putsch.

Who owns the weapons is not a minor issue. Thus, if the armed sectors decide to keep Bolsonaro in the Palace and occupy the National Congress or the Supreme Court after his defeat in the elections, it is worth asking who will remove the putschist and his supporters from the palaces. Thus, we are back to depending on the so-called “legalistic military.” That is, on a part of the repressive apparatus of the State that decides to guarantee the investiture of the elected president (we assume it will be Lula). Considering the authoritarian, interventionist, and demo-phobic trajectory of our Armed Forces, relying only on them is not the best scenario. It is better not to trust in this alone.

What democrats must do

It is imperative to ensure the physical preservation of democrats and their top leaders. It is time to be extremely careful at opposition rallies (which should continue to be held), avoid provocations, and reinforce the security of figures such as Lula. A resounding victory for the opposition candidate in 2022 will be important. Securing his investiture, even more so.

There is not much left but to seek a “broad front.” This means trying to talk to everyone while preserving, however, the leftist character of the candidacy and the agenda of recovery of rights and of the 1988 Constitution itself.

An environment with a level of polarization as the Brazilian one makes unfeasible any pretended “third way”. If the candidate is going to be Lula, it is not necessary to give up everything in the negotiations. It is a fine line between, on the one hand, guaranteeing the election, investiture, and governability, and maintaining a transforming agenda on the other.

In any case, one year in the Brazilian conflict is equivalent to a century. It is risky to make any prediction, but I venture to conclude with one more. Recently, Bolsonaro said at an evangelical event that he envisioned three alternatives in his future: “being imprisoned, death, or victory.” There is no doubt that all of us democrats should fight for Bolsonaro’s defeat (of his candidacy and of his coup) and wish him health and well-being for when he is finally held accountable and arrested for his crimes.