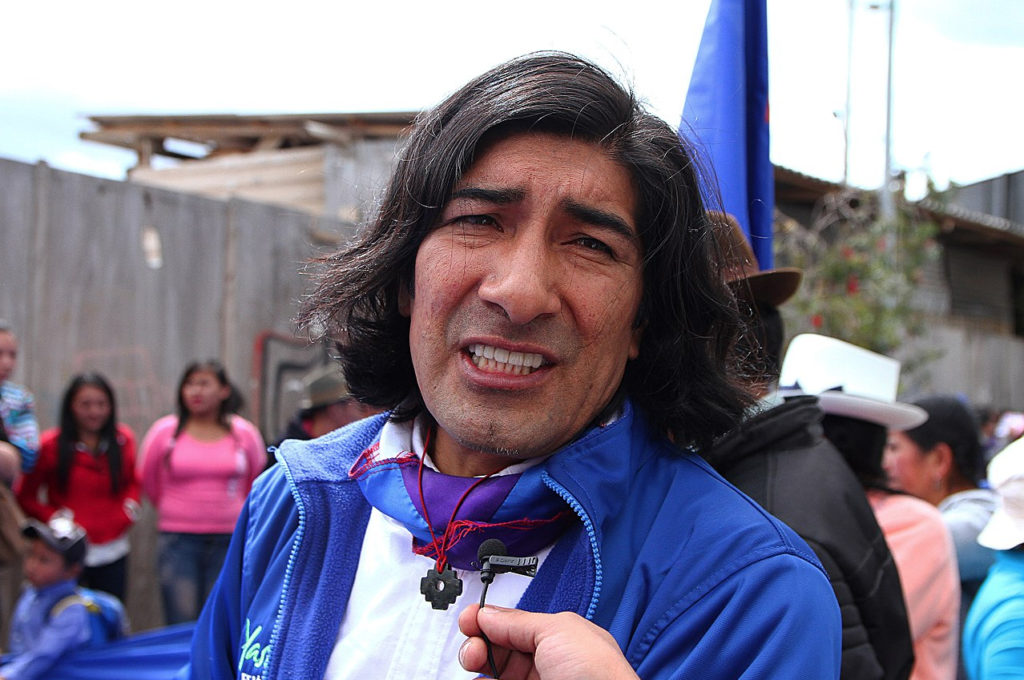 The elections of this February 7th in Ecuador could open an unprecedented scenario whose transcendence goes beyond the borders of the Andean country: a runoff between the triumphant Correa’s candidate, Andres Arauz, and the candidate of the indigenous movement, Yaku Perez. The traditional polarization between left and right is now replaced by a new field for political definitions: the confrontation is between leftists.

On the one hand, what could now be called the traditional left, embodied in the postulates of former President Rafael Correa, Ecuador’s version of the Bolivarianism inaugurated by Chavez and continued by Maduro in Venezuela. And this new expression that would aim to consolidate with the victory of the Pachakútik Movement, which combines the ancestral values of defending the natural world against extractivism, with the positions of global environmentalism and the claims of emerging movements such as feminism and the greens.

The electoral result presents us with a picture of the disfigurement of the traditional right wing; the PSC-CREO alliance (Partido Social Cristiano and Movimiento Creando Oportunidades, CREO) proved to be unsuccessful. From the beginning, it revealed its underlying weakness: an electoral alliance and not a programmatic one, united only by the necessary electoral presence, but accompanied by the reluctance to strengthen too much one of its expressions to the detriment of the other.

Basically, they were united, without being sufficiently aware of it, by a will of self-boycott as a tendency: little clarity in affirming a joint political program that would mean the proposal of a real alternative to get out of the deep economic and health crisis affecting the country.

The 19.58 % of the vote achieved by the candidate Guillermo Lasso, of the PSC-CREO alliance, is far from the 44.41 % that the two forces managed to add up in the 2017 election, when both faced Lenin Moreno. Then, it was a fragmentation that prevented them, as a tendency, from defeating the Correista left represented by Alianza País. Now, ‘united’, the result is even worse.

And reconfiguration of the left

On the other hand, the victory of Andres Arauz also reflects a significant drop in the electoral performance of Correism with respect to the results that this group had been showing in previous electoral contests. It barely manages to surpass 30% when historically its level of voting intention exceeded 40%, reaching in the last election a 39.36% of acceptance.

Two actors emerge in a surprising way. On the one hand, Yaku Perez who represents Pachakutik, political arm of CONAIE, historical organization of the indigenous movement, with almost 20% of the vote. And on the other, Javier Hervas, who obtained 16%, representing Izquierda Democrática, a center party, a reedition of the traditional Ecuadorian social democracy, in force in the 80’s and 90’s of the last century.

The electoral result shows the growth of Pachakútik, protagonist of the October 2019 revolt. Yaku was in charge of positioning his candidacy within the movement, by displacing the other leaders of the indigenous movement closer to Correism, Iza and Vargas, a line that is consolidated with the current result.

The same happens with the vote behind Javier Hervas. The need to abandon the ‘ideological’ rhetoric for the pragmatism of offering business solutions to the employment problem, particularly for the urban middle sectors seriously affected by the crisis.

The distribution of the vote

A quick reading of the distribution of the vote is sobering. Arauz strengthens in the former bastions of the populist coast and of the Social-Christian right (Guayas and Manabí). While Yaku consolidates his representation of the rural world, of the highlands and the Amazon, where Pachakutik and CONAIE have their most consistent political and electoral strongholds.

In general, the results allow us to appreciate the emergence of a renewed vote that expresses a high sensitivity for issues that are foreign to the traditional contenders, both from the right and from Correism. The need to turn towards a model of development and sustainable growth, beyond the traditional rhetoric derived from the redistributive struggle. The inclusion of new issues such as gender vindication and environmentalism, as well as the search to face poverty in the generation of employment and not in populist handouts.

The challenges for the second round to be held next April 11 are enormous. The confrontation is no longer between the left and the traditional right, which has been virtually relegated from the electoral scene, but is located within the left-wing camp.

For candidate Arauz, it will be enormously difficult to confront Yaku Perez and his program, which includes the traditional demands of the indigenous world and the new demands of the emerging social actors. The offers of subsidies and handouts will no longer be enough to captivate an electorate that is moving towards new referents and solutions linked to the need to combine the sustainable growth of the economy with the defense and deepening of rights and freedoms, a position that represents the opposite line to the postulates of Arauz’s Correaism.

The challenge for Yaku Perez is also arduous. How to increase considerably his vote, establishing clear lines of communication with the voters of Lasso and Hervas, to walk together in the line of containment to correismo? How to infect the voter of the big cities and the populist voter, of the goodness and scope of his proposal?