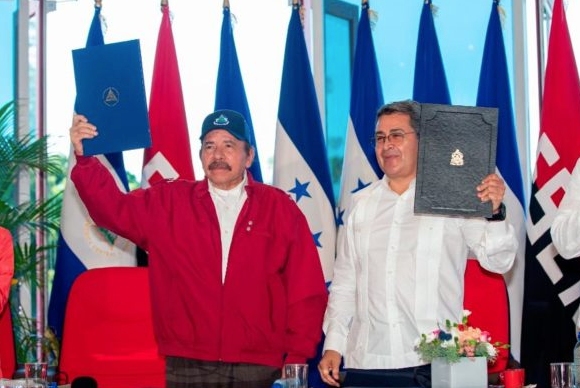 A month ago, on the eve of today’s elections in Honduras, the government signed an agreement with Nicaragua regarding its sovereignty in the Gulf of Fonseca. The agreement implies the ending of repeated actions against Honduran fishermen by the Nicaraguan Naval Force, actions which, despite the ruling, have repeated year after year. For Daniel Ortega, the agreement is a way to tacitly disregard the ruling of the International Court of Justice in The Hague. For Juan Orlando Hernández, it paves the way for the end of his mandate and the probable beginning of his international judicial persecution.

An agreement with personal objectives

The agreement has been received with absolute silence by the supporters of the outgoing president Hernández and with strong criticism from the opposition and independent sectors. And the fact is that the agreement would be unnecessary, since it makes no sense to ratify the 1992 ruling of the International Court of Justice. However, both governments have indicated that in this way Nicaragua explicitly recognizes that its maritime border with Honduras is in the Gulf of Fonseca and that, without explicitly mentioning it, the Salvadoran limits end in the latter.

The agreement was signed at a key moment for both presidents. Daniel Ortega is coming from an election that has been highly questioned at an international level, and Juan Orlando Hernández is facing the end of his presidency and possibly thinking about his next possible legal refuge. And the fact is that Hernández, along with several people around him, fear that the US justice system may request their extradition due to their alleged links with drug trafficking.

At the moment, everything indicates that the opposition will win the presidential elections in Honduras, which would aggravate Hernández’s situation in the country. Even Mr. Nasry Asfura, the officialist candidate, does not offer president Hernández many assurances of protection in the hypothetical case of winning.

In light of the end of his immunity, the president will likely be looking for alternatives to take legal refuge, given that the immunity offered to him as deputy to the Parlacen—which automatically corresponds to him as former president—would not be enough to help him evade US Justice.

In their quest to shield themselves from justice, Hernández and his closest collaborators have in recent years promoted the criticized Special Development and Employment Zones (ZEDE). These ZEDEs, located in certain areas of Honduras, have a sort of independent administrative division, subject to the national government and provided with a high level of autonomy with their own political system, at the judicial, economic and administrative levels.

The ZEDEs could be a refuge for a first stage. Those already installed cannot be dismantled without first going to international courts, whose rulings, even if favorable to the Honduran State, would imply the payment of multimillion-dollar sums to their owners in order to dismantle them. In spite of citizen rejection through municipalities and civil society organizations, three of the ZEDEs are still going ahead.

Other supposed possibilities, handled by Honduran analysts, would be to take refuge in Israel or Taiwan, but in both cases, the link of these countries with the United States would make it not feasible. That leaves then Hernández’s most reliable ally, former guerrilla fighter Daniel Ortega, who is the first president to accept his triumph in 2013 and in 2017. In addition, Ortega has already demonstrated his “solidarity” with former peers in legal trouble, including former Salvadoran President Mauricio Funes, who not only found protection in Nicaragua, but employment in the country’s Foreign Ministry, on top of a Nicaraguan nationality.

In any case, before moving to Managua, Hernández would be left with the option of a new fraud, just as in 2017. This time, however, he would no longer have the backing of Washington or the Organization of American States (OAS), whose secretary general follows to the letter the “instructions” of the State Department.

If eventually some leaders of the ruling National Party dared to commit a new fraud, Daniel Ortega would be the first to accept the situation and endorse the “triumph”. But it remains to be seen what position would assume the presidential candidate, Nasry “Tito” Asfura. He could refuse to be part of a fraud, not so much because of some moral or ethical issues, but because he could be under great pressure and without the support that his predecessor had after his own fraud.

Given the complexity of the different scenarios, it is likely that Nicaragua is the best option for Honduras’ future former president. According to statements made by the Honduran analyst Edgar Soriano to the newspaper El Libertador, “the head of the Honduran State and the people around him are putting their personal interests first in order to take care of their future, once the president’s illegal mandate ends at the beginning of 2022”. In the same vein, the analyst added that “Nicaragua could be the destination for exile of the current leader of the National Party”.

The “personal” exchange of favors between both presidents—just in case—doesn’t stop. Prior to the Nicaraguan elections, Honduras abstained from voting in the OAS on a resolution calling for the immediate release of the presidential candidates and political prisoners in Nicaragua. Furthermore, in October, the Honduran government donated to Nicaragua the Covid-19 vaccines delivered by the United States—despite the poor vaccination rates in the country—and set up vaccination centers in points close to the common border, facilitating the vaccination of its neighbors.

All this is pure speculation and until Hernández’s presidential term is over and investigations are effectively initiated, we will not know the true intentions of the outgoing president. Still, what is certain is that everything indicates that he is preparing his suitcases.