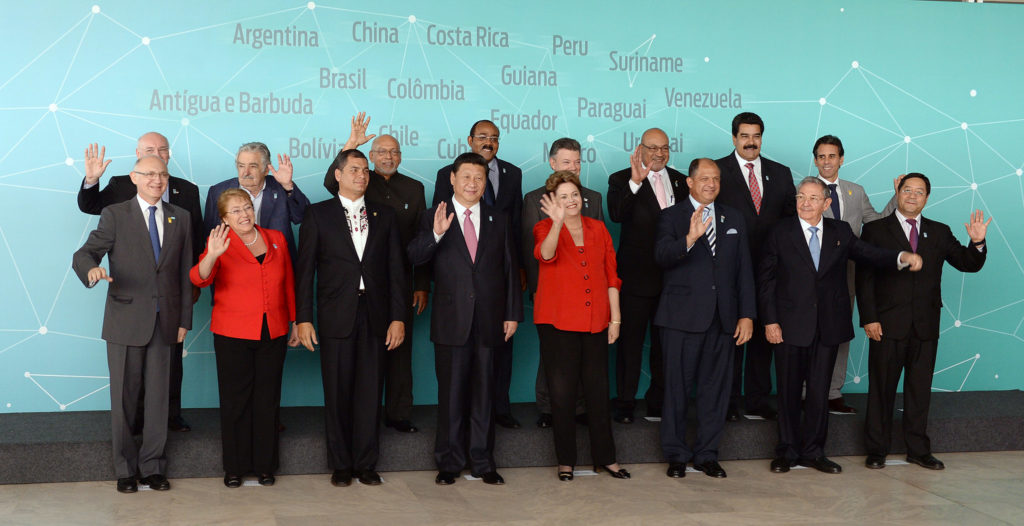 During Xi Jinping’s administration, the Latin America and the Caribbean (LAC) region has played an important role in providing political capital and spaces of greater influence in favour of China over the United States. Particularly important factors have been the sustained growth of the Chinese economy as a demander of exportable Latin American products, the regional reception of Chinese foreign direct investment (FDI), productive partnerships in manufacturing and service sectors, and Chinese financing for infrastructure works, among others.

Under Xi Jinping, China’s strategy towards the region has been consistent and persistent. China’s proactive stance on globalization and global free trade brings the region closer to its sphere of interests. As expressed by President Xi Jinping, China’s aspirations to build a “less asymmetric globalization”, foster “mutual international cooperation” and promote the construction of a “Community of shared destiny for mankind”, coincide with Latin American interests and values.

Since the rise to power of President Xi Jinping, China’s trajectory as an emerging power has evolved under the paradigm of the “Chinese dream” of restoration, development and modernity towards the middle of this century. On the political level, this horizon serves to consolidate the presidential figure as the maximum leader and center of the main decisions on public policies; on the economic level, the vision of a restored China drives the reconversion of the national productive apparatus through active policies on scientific and technological development, as well as the projection of its military power towards the region and the world.

Xi Jinping and the transformation of contemporary China

In all this trajectory -past and present- the presidential leadership is unquestionable. A leadership built on the basis of a normative re-engineering of the party statutes that allows Xi Jinping to remain in power indefinitely, thus putting an end to the institutional arrangements and inter-factional balances within the Communist Party of China (CPC) established by Deng Xiaoping at the dawn of the reform process.

The arguments put forward to confirm the centrality of his figure as the “core” (hexin) are the need to guarantee internal stability and ensure governance in times of growing domestic and external tensions (read conflict with the United States), sustain the anti-corruption campaign as a key instrument to guarantee party discipline, expand state participation in the national economy, persist in building technological power, promote plans on military modernization in order to ensure the country’s defense against external threats, and protect surrounding maritime areas considered by China to be under its sovereignty (South China Sea).

Internally, President Xi Jinping’s style of leadership has been characterized by abandoning the predominant style of “democratic centralism”, reviving a discourse based on the ideological supremacy of Marxism-Leninism as the Party’s political guide, the rejection of Western values, standards on human rights or pro-democratic forms of political organization, all allusions present in speeches and pronouncements addressed to political cadres, officials, the Armed Forces, businessmen and society in general.

In the external sphere, the adoption of assertive positions by Xi Jinping shows features of militarization of Chinese foreign policy in the region, less conciliatory positions regarding sensitive issues such as the reunification with Taiwan under the pro-independence Democratic Progressive Party (DPP) government or the democratization of Hong Kong, increased military activity in the South China Sea, persistent border tensions with India, and the escalation of tensions (political, commercial and military) with the United States.

Although the human rights situation of ethnic minorities such as the Uyghur, or doubts about China’s responsibility in the beginning of the COVID-19 pandemic eroded its international image, a mix between “wolf warrior diplomacy” and “vaccine diplomacy” mitigated the negative impacts on its soft power, placing the country once again as a promoter of the “universalization” of vaccines by considering them a “global public good” (GPG).

In this context, in the post-Trump era and under President Biden, “bipartisan efforts” by the United States to contain China persist. The strategy shows various facets; neutralize Chinese efforts to reformulate the “old institutions” inherited from the 20th century world order, contain its military expansion in the South China Sea and the Indo-Pacific (IOR), sustain its advantages in high-tech areas, reaffirm alliances with Asian partners (coalitions between democracies), prevent Chinese cyber espionage and mitigate the bilateral trade deficit. In this context, in the face of an unstable world, China and Latin America and the Caribbean in general, evaluate mutual advantages and disadvantages of an approach that arouses suspicion in Washington.

The incorporation of Latin American countries into China’s global connectivity plans under the global partnership approach (OBOR/BRI), and integrating them into the Asian Infrastructure Investment Bank (AIIB), are lines of action encouraged under the presidency of Xi Jinping. Given this scenario, a United States with a more conservative and militaristic profile is reluctant to consent to the expansion of China’s presence in LAC and aspires to rebuild trust and recover lost regional spaces of influence.

Without renouncing to historical principles of action in the international system, a powerful China in the 21st century could only aspire to modify a world order that was largely inherited from the 20th century. The empathy achieved by China in LAC enables the opening of formal and informal diplomatic channels by governments, encourages business activism, the development of studies in the academic field and greater mutual knowledge. As was the case during the Cold War, despite U.S. reservations, the perception of China as a “partner for regional development” prevails and presupposes the future intensification of a Sino-Latin American cooperative agenda.

*Translation from Spanish by David Castells