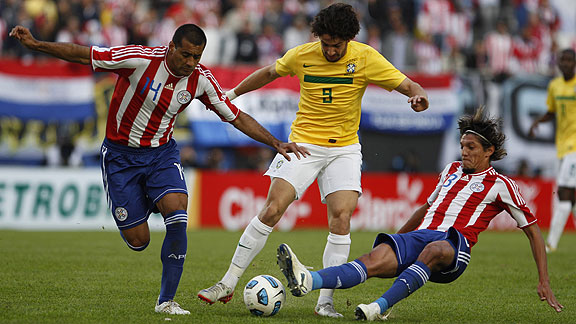 Soccer was born in Paraguay. It was not the English who created soccer, as the dominant European literature claims. It was the Guaraníes who invented it. This is the thesis of the documentary short film Los Guaraníes inventaron el Fútbol (2014), directed by Paraguayan filmmaker Marcos Ybáñez and based on the research of Spaniard Bartomeu Melià (1932-2019), a specialist in the history of the Guaraníes. Melià affirms that they already played soccer in the 17th century in the Jesuit strongholds of San Ignacio Guazú, in the current department of Misiones, 230 km from Asunción. There are records of the practice of manga ñembosarái – “playing the ball with the feet” in Guaraní- dating back to 1639, long before Paraguay’s independence in 1811 and the regulation of soccer by the British in 1848. According to the documentary, the manga ñembosarái was the forerunner of modern soccer and the Guarani are the fathers of soccer. In this sense, Paraguay claims the paternity of soccer in the world.

It is said that the first record of the practice of manga ñembosarái is the “Tesoro de la Lengua Guaraní”, a bilingual Guarani-Spanish dictionary published by the Peruvian Jesuit Antonio Ruiz de Montoya in 1639. There, “mangaì” is defined as “tree that gives the balls they call de neruio”, a reference to the rubber balls with which the Guaraní played manga ñembosarái on Sundays after mass.

Other records of this sport appear in the books Breve Relación de las Misiones del Paraguay (1771) and La República de Platón y los Guaraníes (1793), written by the Spanish Jesuits José Cardiel and José Manuel Peramás, respectively. These records suggest the practice of this game -very similar to today’s soccer- which consisted of two teams playing and touching the ball, without letting it stop.

In manga ñembosarái there was no time limit or goals. The matches always ended in nil-nil. The loser was the team that got tired first and abandoned the game, something that could last for hours. There were those who bet on which team would win, as well as spectators and onlookers. The ball was difficult to control, which demanded skill from the players. Made of wet sand, the ball was covered with rubber -resin extracted from the mango tree- and inflated with bamboo until it reached the desired size.

The municipality of San Ignacio Guazú, where the first Jesuit reduction was founded in the La Plata Basin in 1609 and where the Guaraní Indians gathered, claims soccer as its cradle and associates it with its cultural history. In 2010, the thesis that soccer was a Guarani invention was published in the Vatican newspaper L’Osservatore Romano, increasing the legitimacy of the Paraguayan claim.

The precursors of contemporary soccer

Since then, the subject has been dealt with in Argentine, Spanish and Paraguayan periodicals. However, it is reasonable to think that manga ñembosarái is not the only precursor sport of today’s soccer, but only one of them, among countless others that date back to older times. Adopting a global historical perspective-rather than a geographically restricted, nationalistic one-seems to be more appropriate for understanding the evolution of ideas and practices around the world.

There are other cases that, like the manga ñembosarái guarani, can also be considered precursors of contemporary soccer. As an example, I cite the ts’uh Kúh (cuju) practiced in China two thousand years before Christ, which consisted of a military training activity very similar to the current logic of soccer. The Episquiro practiced in ancient Greece consisted of two teams of eleven or more players, marked by violence. The ball was made of sand with an ox bladder and the use of hands was allowed, unlike manga ñembosarái, where it was forbidden.

There was also the pre-Columbian soccer of the Mayan and Aztec peoples in Mesoamerica, practiced more than three thousand years ago, with rubber balls and blood rituals in which the captain of the losing team was sacrificed. I also mention Harpastum, practiced in the golden age of the Roman Empire, whose objective was to throw the ball into the opposing team’s field. And kemari, practiced in Japan since the 7th century, in which bodily contact was forbidden, given its religious and ceremonial mystique. Literature indicates that kemari was influenced by Chinese ts’uh Kúh.

In addition, there is the calcio fiorentino practiced since the 16th century in Florence, a sort of revival of the Roman harpastum. Over time, bulls were introduced into the arena to increase the adrenaline of players and spectators. The games resembled a combat arena, as punches, kicks and slashes were allowed between players, which not infrequently triggered widespread brawls. Still, the goal was to score goals.

As early as the 17th century, North American natives practiced pasuckuakohowog, whose matches could bring together up to a thousand players, with joint celebrations at the end. In Australia, the natives played marn grook. In Alaska, the Eskimos played asqaqtuk, something similar to soccer on ice. These and other forms of footwork can be considered forerunners of contemporary soccer.

It is reasonable to conclude that the manga ñembosarái guaraní does not explain the entire history of soccer. Even so, it is a legitimate precursor of contemporary soccer – as are the other examples (without intending to exhaust the inventory) – and a historical legacy of the admirable Guarani culture.

It would be inaccurate to attribute the paternity of soccer to a specific people. If it was not the Paraguayans who invented soccer, it was not the British either. Australians, Chinese, Eskimos, Greeks, Italians, Japanese, Mesoamericans and North Americans, among others, have contributed positively to the construction of this history, of which the Guarani-Paraguayans are also a part. Far from being an exclusively Guarani or British product, soccer has a multiple and endless paternity. Paraguay is another piece of this cast.