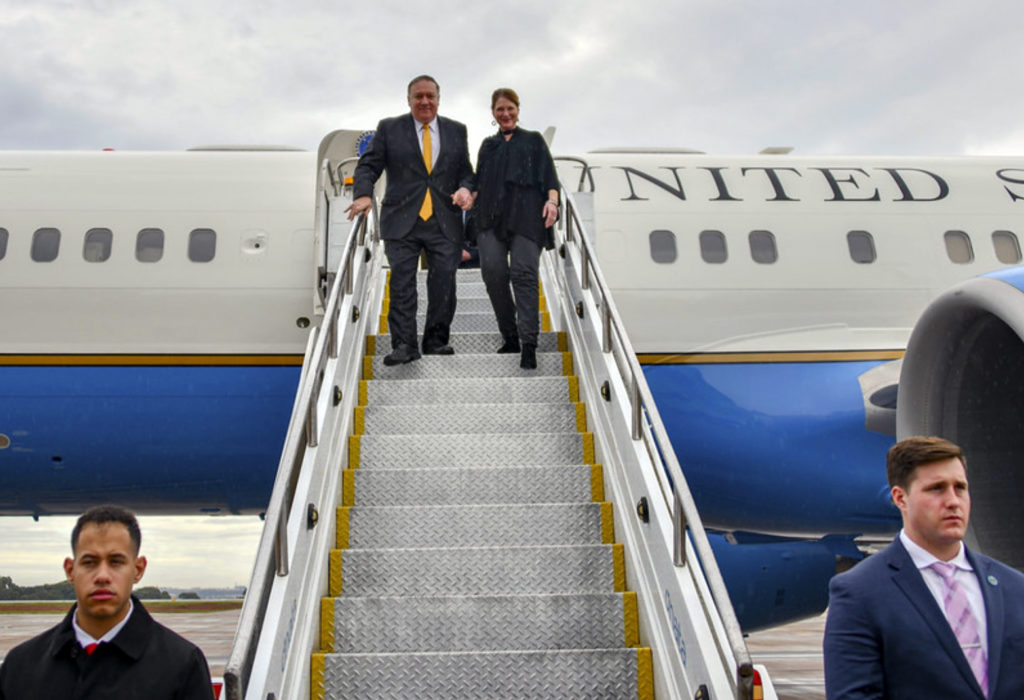 Today (September 18), for the first time in history, a U.S. Secretary of State will set foot on the world’s largest river island. Immediately, Mike Pompeo will be in Georgetown, Paramaribo and Boa Vista, three of the main cities on the island of Guyana. Most of the news coverage and analysis of this has focused on Donald Trump’s attempt to present a tougher and more effective agenda on Venezuela for the Republican vote hunt in Florida. But there are other factors that explain this unprecedented last minute announced visit.

The context of political fragmentation and trade disintegration in South America makes our subcontinent an open stage for extra-regional power struggles. The division between Brazil and Colombia, on the one hand, and Argentina, Mexico and Chile, on the other, made it possible, also for the first time in history, that last Saturday (September 12) an American was elected to preside the Inter-American Development Bank. The son of a Cuban mother, Mauricio Claver-Carone was special advisor to Donald Trump and executive director for Western Hemisphere affairs at the National Security Council. His main campaigning argument was the instrumentalization of the bank as a counterpoint to Chinese expansion in Latin America. On Tuesday (Sept. 15), Pompeo’s visit to North and South America was announced.

The island of Guyana is unique, but the integration of its infrastructure is very poorly developed and was never planned on its entirety. Its 1.7 million km² is equivalent to the European territory of Germany, France, Spain and Italy combined. Located in the north of South America, it is, at the same time, Atlantic, Caribbean and Amazonian, having as main demarcations the two main rivers of northern South America, the Amazon and the Orinoco, and the natural interconnection between them by the Cassiquiare channel and the Rio Negro; its northern part is divided in the middle by the Esequibo River. In addition to Suriname and Guyana, this territory is shared by Brazil – the states of Amapá, Roraima and the northern floodplain of the Amazon from the entire state of Pará and Amazonas to the Rio Negro -, Venezuela – the states of Delta Amacuro, Bolivar and Amazonas – and France – the overseas department of Guyana.

Earlier this year, general elections were held in both Guyana and Suriname. In both countries the election results were very close and it took a while for those defeated to concede. Irfaan Ali’s victory in Guyana was only formalized after four months. In contrast, in the 2015 elections, the now abandoned and dying Union of South American Nations (Unasur) had sent electoral missions with the participation of Brazil and the results were immediately accepted by all political actors in both countries.

It is possible that in a few years Guyana’s oil production will surpass that of Venezuela.

Economically, Guyana and Suriname have few relations with South America. Only 2% of their foreign trade is with the other ten countries in the region. In the last two years there has been an oil boom in Guyana that makes it the only country in the Americas that will have positive economic growth in 2020. Offshore oil production is also expected to expand in Suriname. It is possible that in a few years Guyana’s oil production will surpass that of Venezuela. Although it has the largest oil reserves in the world, Venezuela has seen its oil production fall due to its own inefficiency and the United States’ embargo in recent years.

The strategy of overthrowing the Venezuelan government with political isolation and economic asphyxiation designed by the United States and the Lima Group in 2017 had as concrete results the collapse of oil production, the deepening of the Venezuelan social crisis and the internal political and economic strengthening of the military loyal to Nicolás Maduro. Seeing itself isolated from its traditional allies, Venezuela became the largest Chinese debtor in Latin America. With every step taken by the US and NATO within the Russian sphere, Moscow reinforces its economic, political and military ties with Caracas.

In 2002, when the management of the state oil company PDVSA tried to overthrow the government, Hugo Chávez went to Brazil to send ships to ensure the internal supply of gasoline. Now it is Iran that fulfills this role. In the December 2015 parliamentary elections, won by the opposition to Maduro, the main external electoral observation mission was Unasur. In the December 2020 parliamentary elections, with low opposition participation, Turkey should take over its role.

This is not the first time that Guyana and Suriname have found themselves in the midst of major geopolitical disputes. Guyana became independent from the United Kingdom in 1966 and inherited long-standing territorial disputes between the British and Venezuelans. Suriname became independent from the Netherlands only in 1975 and was quickly recognized by Brazil. Guyana and Suriname were born threatened by the thesis of the internationalization of the Amazon, which was gaining strength in Europe and in various international organizations, and by the shadow of the cold war.

In 1978, under the leadership of Presidents Ernesto Geisel of Brazil and Carlos Andrés Pérez of Venezuela, the Amazon Cooperation Treaty was signed with the aim of promoting the integral development of the region and its populations and reaffirming the exclusive sovereignty of the eight countries of the region over the management of the world’s largest biodiversity reserve. Bolivia, Brazil, Colombia, Ecuador, Guyana, Peru, Suriname and Venezuela vetoed the possibility of extra-regional powers participating in the treaty at that time and in the future.

In 1983, the Government of Suriname was accused by the United States and European countries of serious human rights violations. Both the former metropolis and the hemispheric power tried to isolate the country politically and economically in order to overthrow its government. Cuba and other socialist-oriented countries had increased their activities in Suriname. The Soviet Union increased its presence in the Caribbean.

The United States, governed by the Republican Ronald Reagan, sought support from João Figueiredo’s Brazil for an intervention in Paramaribo. Brazil refused and, alternatively, sent a diplomatic mission led by General Danilo Venturini to Suriname. A broad Brazilian cooperation was initiated for the organization of the State of Suriname, which distanced itself from the socialist countries, avoided the American invasion and guaranteed a relative stability for the country in the last decades. Months later, due to a similar situation, the United States invaded the Caribbean island of Grenada and killed its president Maurice Bishop.

Brazil’s action in northern South America was effective in deterring extra-regional presence, whether it acted through regional consultations with the cooperation treaty with the Amazon or bilaterally with the Venturini mission. The Geisel and Figueiredo governments knew that the biggest loser in a conflict driven by extra-regional interests in South America would be Brazil itself.

Mike Pompeo’s presence in Guyana, Suriname, Roraima, and Colombia on the same trip can only be understood in this context of fragmentation of South American regional governance and less Brazilian prominence.