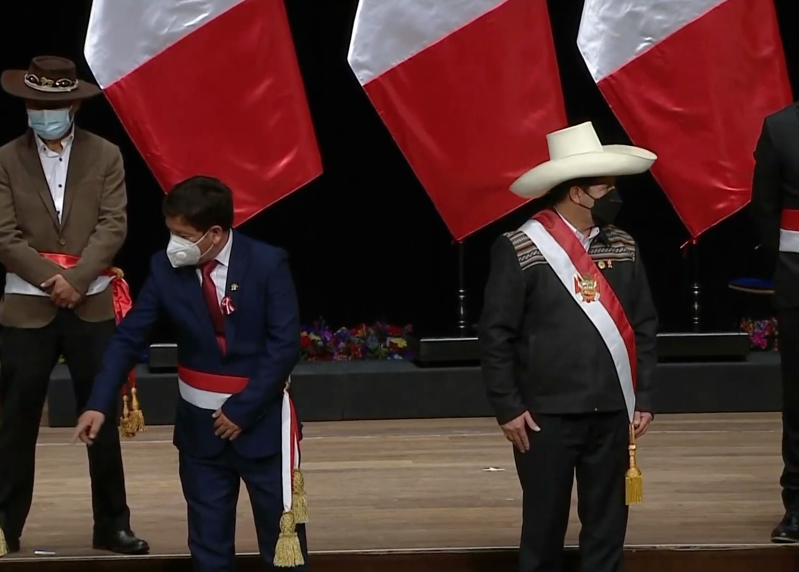 On the afternoon of Wednesday, October 6, President Castillo announced in a short message to Peruvians that he accepted the resignation (which was actually requested) of his Prime Minister, the leftist radical Guido Bellido. This was the end of one of the shortest and most controversial administrations in Peruvian political life, less than 100 days after the beginning of the new government.

Guido Bellido was not the first to leave the government, but unlike Hector Bejar,, the former Minister of Foreign Affairs, the latter had to resign under pressure from radical right-wing groups. In just three months, the former Prime Minister had worn out everyone’s patience as he even conspired in internal communications among parliamentarians against the President’s nominations.

Bellido was elected congressman for Perú Libre, but with his nomination as minister he became the President’s most important collaborator to lead the government’s general policy. In a sense, he served as a sort of second man after Castillo. Athough, because of his political weight, he had every right to demand more space for his cadres in the government. Indeed, in his short time as minister he developed an agenda different from the needs and objectives of the government.

Moreover, by nominating people lacking the minimum skills for the exercise of public office instead of names that could contribute to the construction of a solid government, he turned these first two months into a martyrdom for the government, which was permanently besieged by the opposition.

Amidst so many urgencies and difficulties, Bellido dedicated himself to promoting a political agenda based on ideology instead of focusing on more concrete public policy issues. His ambition led him to seek notoriety on issues he was unfamiliar with. This inexperience contributed to the more radical opposition gaining more space in Congress. This drove moderates away to rally in favor of the dismissal of Labor Minister Iver Maraví, another radical incumbent close to Peru Libre leader Vladimir Cerrón.

If the government seeks to promote changes without a simple majority in Congress and without control of the parliamentary agenda, it will be forced to seek a strategy of broader articulation that dialogues with other political forces, especially with the more moderate parliamentarians. However, unlike the President’s speech, which was clearly in favor of a balanced position,  Bellido’s was bold and aggressive despite the weakness of his party, which has only 37 of the 130 seats.

The big problem of radical platforms when they reach government (whether from the left or the right) is the difficulty of translating their ideologized speeches into concrete solutions and public policies. Hence, their ideological agendas tend to be confrontational, generic, repetitive, and lacking in content. This caused Bellido and his supporters to lose a great opportunity to contribute to the government with concrete proposals.

Fissures in the government

Beyond the fact that Bellido is no longer here, the differences between some ministers have left fissures that are projected onto the ruling party itself. It seems to be divided between those who support the moderation of Pedro Castillo and those who seek a transition towards a more radical change.

If the most radical wing of the ruling party does not assume the weakness of its government and insists on resolving demands linked to a moral imperative instead of a strategic one, there is a possibility that the government party may break. If so, the radicals could become increasingly isolated.

In the face of such disarray in the government, the good news is that the latest Ipsos survey mentions that 77% of Peruvians believe that the president should not be removed from office. However, the most radical opposition in Congress insists on passing laws to curtail the president’s prerogatives, such as the one that seeks to limit the executive in the use of the question of confidence by prohibiting it to be raised on constitutional reforms or issues within the competence of Congress.

Perhaps it is time that the different legislative forces set out to isolate once and for all the right-wing radicals in order to improve the political climate and allow the government to focus on facing the challenges left by the pandemic in the country.