In the first semester of 2022, the world has faced a scenario of economic uncertainty, given, among other aspects, the accelerated increase in post-pandemic consumption and the invasion of Ukraine, factors that have contributed to a generalized increase in prices, i.e. the dreaded inflation. According to the World Economic Forum, inflation is rising worldwide and food and energy prices are reaching record highs.

In response to this inflationary trend, central banks are raising interest rates in an attempt to cool economies. In fact, the U.S. Federal Reserve (FED) raised its benchmark interest rate to a range of between 1.5% and 1.75%, the largest increase in the last 30 years. This measure has driven the strengthening of the dollar to the point that it has reached one-to-one parity with the euro, something that has not happened since 2002. The European Central Bank (ECB) has responded and raised interest rates this week by half a point, the largest increase in 22 years.

How do the global context and the strengthening of the dollar affect Latin American currencies?

A stronger dollar in an unstable global context generates massive movements in the emerging markets, such as those in Latin America, with respect to investments in dollars, which leads to a shortage of the currency and, consequently, an increase in its price. In addition, local tensions have led to a weakening of the region’s currencies, particularly in the last weeks. 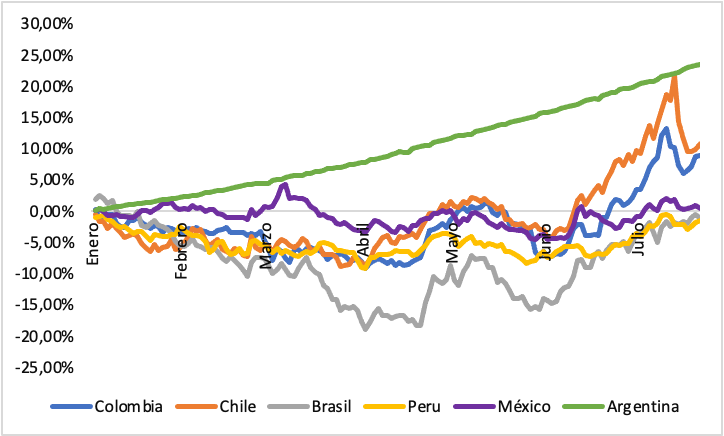 The currencies of the six largest economies in the region have been on an upward trend recently (between June and July), particularly marked in Colombia, Chile and Brazil, and somewhat more stable in Mexico and Peru. However, the average trend is that of a rising dollar, i.e. Latin American currencies are depreciating against the U.S. currency (see chart). Compared to the beginning of June, one dollar costs 16% more in Colombia, 14% in Brazil and Chile, 8% in Mexico and 6% in Peru. In Argentina, it is 8% more expensive; however, it is the only country where the official dollar price is set by the Central Bank.

The Chilean peso (COP) and the Colombian peso (CLP), the most devalued

Since January 2022, the Chilean peso has been the most devalued in the region. One dollar is 9.6% more expensive than at the beginning of the year and reached an all-time high on July 14 when it rose to 1,060.63 pesos. There are several reasons why the Chilean currency is among the most devalued in the world so far in 2022. Chile is the largest copper producer on an international scale, and China, is its main trading partner, so the fall in the price of the metal has had a direct effect on the country’s economy. According to Bloomberg, the metal has lost almost a third of its value since the peak price reached in March; furthermore, the article adds, that the COVID-19 closures in China are eroding demand.

On the other hand, the southern nation is in a process of intense internal political debate. President Gabriel Boric, who has been in office since March, has low approval ratings and a plebiscite is approaching on September 4, which aims to approve a new political constitution.

It is worth noting that the trend until mid-April was the opposite (the Colombian peso was appreciating against the dollar) and reached a minimum value of 3,690 pesos per dollar. However, the uncertainty due to the presidential race in which a change of political course was defined, together with the external factors already mentioned, awakened an initial uncertainty that had an effect on the price of the dollar.

What about the rest of the region?

Volatility as a result of the global context has meant that the increase in commodity prices benefited the region (a major commodity producer) during the first semester this year. This trend, however, has varied from country to country.

In Brazil, although recently, there has been a process of devaluation of the Brazilian real (BRL) against the dollar, when analyzing the outlook since the beginning of 2022, the price variation is negative: one dollar costs 2.7% less today than in January. This case is similar to that of the Peruvian sol (PEN), which has lost its position against the dollar since June, but has become cheaper since January: one dollar costs 2% less. The trend in Mexico is close to zero; compared to its average price in January, one dollar is only 0.49% Mexican pesos (MXN) more expensive.

Argentina is an exceptional case. In addition to strict exchange rate controls, it has one of the highest inflation rates in the world. This environment causes strong tensions for the monetary authorities, a recurrent situation in the country.

In conclusion, in an unpredictable global context with the uncertainty of the pandemic, war, inflation and political instability, it is to be expected that exchange rate volatility will continue. We will have to see how the region’s monetary authorities respond to defend their currencies without harming their exports and economies. This is never an easy task. 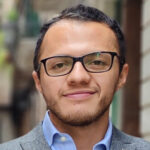