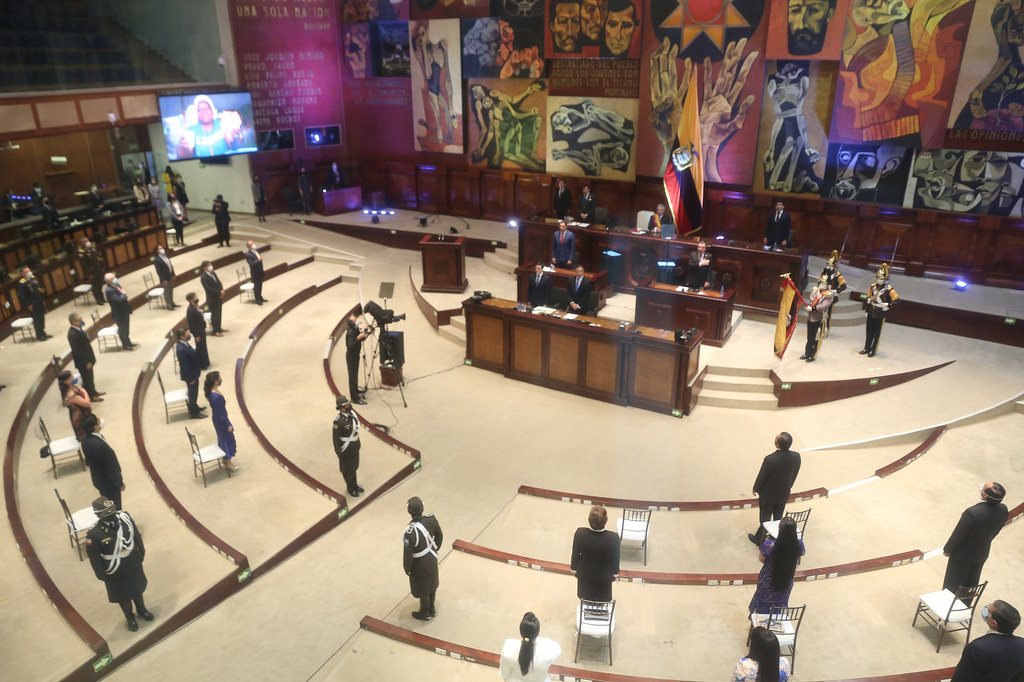 Ecuador, like the rest of Latin America, has closed the year 2020 wrapped up in a crisis of uncertainty regarding the immediate future. The uncontrollable presence of the Covid-19 has installed a combination of health and economic crises that feeds back dangerously: the more uncontrollable the health crisis becomes, the more the economy is affected; the more it worsens, the more complicated the operation to control the pandemic becomes. Although Covid-19 can affect everyone without recognizing class, age, or gender differences, it mainly affects those most vulnerable sectors of the economy, the self-employed, who live in the informality and survival that characterize urban agglomerations.

This double dimension of the crisis ends up affecting the political institutional framework; the phenomenon of corruption increases and takes advantage of the social and economic disarray, even compromising political actors. The involvement of the political class in corruption causes politics itself and its institutions (parties, assemblies or congresses and the executives themselves) to enter a spiral of uncontrollable delegitimization.

In Ecuador, the popularity of the president, but also of the Assembly, does not reach double digits; in Peru there was recently a parliamentary coup that replaced President Vizcarra; while in Chile the call for a Constituent Assembly was approved via consultation.

In Ecuador, a considerable sector of citizens grouped around the Citizens’ Committee for Democratic Institutions has collected more than three thousand signatures to get the call for a popular consultation approved. This would seek to introduce radical transformations into the current constitution, which was designed to suit former President Rafael Correa and his Alianza País group.

This proposal for a consultation passed through the filter of the Constitutional Court, but has received resistance and obstacles in the legislative process, particularly when trying to eliminate a substantial aspect, such as the introduction of a second chamber in the current mono-chamber Assembly.

Can the double chamber contribute to reversing the crisis of efficiency and legitimacy of the political system? How can it reduce the tendency to concentrate power in the executive that is characteristic of hyper-presidentialism, without this meaning obstruction or blocking of decisions? Can the deliberative logic be perfected by passing through a double filter of discussion in the formation of laws and in the supervision and control of the management of government?

In the proposal put forward, the Senate or second chamber points towards institutional abstraction. It encourages a long-term view, a strategic vision; in this line, it complements the territorial representation that is expressed in the election of provincial assembly members and that is specified in the lower house. The Senate appears as a reflexive organ, that is, it stops with its power of veto the hurried decisions conditioned by the circumstantial pressure and forces to rethink them; it returns to the lower chamber and forces it to re-discuss the law initially approved, a function of brake that, however, cannot become a blockade; the upper chamber would not be forced to approve again the version re-discussed by the lower chamber.

The Upper House, on the other hand, can provide itself with greater legitimacy by championing general interests over party interests and, at the same time, contribute to the quality of law-making; it thus adds value to the management of immediate politics, which means the differentiation of competences between both chambers.

It would seem that the intentions to stop the possibility of the Ecuadorian legislature calling for a consultation are due to the fear that it could affect the current status quo of the party system. The fear of modifying an institutionality that could be functional to a modality of reproduction of the party system, which is that of clientelist arrangements due to the character of local and provincial representation that characterizes the current representative system.

It is a system that seeks to appear highly representative of the social base, while leaving the strategic direction of politics to the unquestionable concentration of hyper-presidentialism, which in the case of Ecuador has been shown to be responsible for systemic corruption.

In both cases, in Chile and Ecuador, modalities of direct democracy (consultations) are combined with representative democracy (assemblies).   Direct consultations are appropriate in exceptional or extraordinary cases that are not fully defined in the constitutional charters, as in the case of Ecuador, or when the deliberative possibilities of representation do not produce results and only lead to the blocking of decisions, as in the case of Chile.

In both, the necessity of inovcking the consultation is due to the need to have a greater burden of legitimacy of origin, or to ratify a future course established by social pressure, as would be the case in Chile, or when it is considered that the same consultation could produce a new course of reform, as is the assumption of the Citizens’ Committee, in Ecuador. In any case, it is advisable to think of them as complementary functions and not as alternative functions.

Both reforms, the Chilean one, just like the Ecuadorian one, aim to better combine the two challenges that characterize every political system: its legitimacy and its effectiveness. In both cases, the use of proposals for institutional reform through the consultation process leads us to discern the system’s performance. In both cases, the institutionality of the political system is at stake, as we discuss agreed-upon rules that are valid for all political actors, beyond their ideological or programmatic orientation, an institutionality where the imperative of protecting and deepening democracy is realized.

The situation is enormously paradoxical: direct democracy can be an important instrument of political innovation, as long as the decision-making capacity of political representation is truly strengthened.

Photo of the National Assembly of Ecuador in Foter.com / CC BY-SA