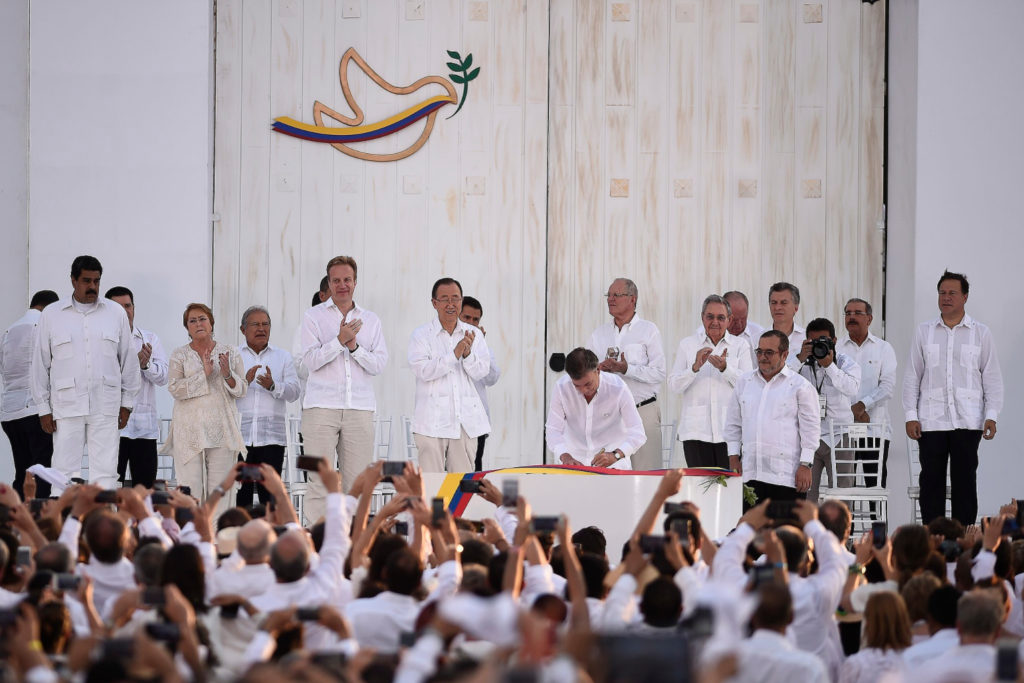 More than four years have passed since the signing of the Peace Agreement between the FARC-EP guerrillas and the Colombian government led by Juan Manuel Santos. In spite of the simplistic reductionisms, lies, and furious attacks of Uribism on the Agreement, analytical reports with profound social scientific rigor, such as that by the Kroc Institute of the University of Notre Dame, warned, from the start, about the scope, depth, and relevance of the commitments subscribed between the guerrilla and the Executive. In fact, this was conceived as the most comprehensive peace agreement of the last thirty years and actors such as the European Union, the United Nations and the International Criminal Court did not hesitate to support it.

The surrender of weapons by the former guerrillas and their massive demobilization in favor of a process of reincorporation into civilian life was accompanied by mechanisms for political participation and alternative jurisdictional treatment. However, in many cases the opponents of the Accord quickly, and in a manner as fallacious as sibylline, interpreted the agreements as simple offerings and favored deals in exchange for abdicating weapons.

Nothing could be further from the truth. The political participation of the FARC-EP, in reality, implied recognizing to democracy and the institutions of the rule of law the exclusive prerogative of channeling the conflict through the ballot box. Likewise, despite what the government of Iván Duque –the main saboteur of the fulfillment of what was agreed– the Agreement also included mechanisms that enhanced the rights of truth, justice, reparation and non-repetition for the victims and the whole of a social fabric battered by decades of violence.

In the last few days, two events have taken place that faced the ex-guerrilla, originally from Marquetalia, with reality’s mirror. First, the second national assembly of the FARC-EP’s heir party was held. In the first national congress, which hosted the founding of the Revolutionary Alternative Force of Colombia (FARC), some postulates were put forward that were clearly erratic. Maintaining an acronym that in reality is a cursed burden for the memory and democratic coexistence in Colombia, was combined with ideological and programmatic postulates that were deeply outdated and extemporaneous for what Colombian society demands in the 21st century.

These decisions were largely due to the leadership of the most orthodox faction, headed by “Iván Márquez” and “Jesús Santrich”, which finally took the “easy road” of returning to armed activity in 2019.

As a result of all this, the FARC’s electoral results speak for themselves: just over 52,000 votes, equivalent to 0.34% of the vote, in the Senate elections, and a not more flattering result in the departmental and municipal elections at the end of 2019.

That is to say, the political and social reality has shown the deep rejection of the FARC in the Colombian society, reiterating that the more than six million citizens who supported the Agreement in the plebiscite of October 2016, in no case, were firm supporters of a political project coming from the former guerrilla at the ballot box.

The second national meeting, postponed for a year because of the pandemic, changes of name of the party, which from now on adopts the name “Comunes”. It also leaves a strategy yet to be made visible and a political meaning, so far as ambivalent and weak, to be consolidated.

Next year elections will be held and nothing invites to think that the redefined party will present any candidacy. Rather, it will seek to enter into a framework of alliances that, so far, apart from exceptions, have not been consolidated. This is due to the fact that, for any grouping, the support coming from the former guerrilla is a sum that subtracts.

Without new faces, new speeches, new contributions and a new program, the heir party of the FARC-EP runs serious risks of falling into an ostracism without return. And, sooner rather than later, its political project will simply disappear.

Said case, initiated in October 2018, contemplates more than 20,000 kidnappings that coincide with the moment of greatest boom and combat capacity of the guerrillas, between 1998 and 2002. In this way, and resorting to the principle of command responsibility, prominent former commanders and leaders of the political party would be affected.

If the case is successful, the Agreement provides for alternative sentences of imprisonment of between 5 and 8 years for the members of the Secretariat, which at the time was the highest body of the guerrilla. Among them Rodrigo Londoño (“Timochenko”), Pastor Alape, Jorge Torres (“Pablo Catatumbo”) or Milton de Jesús Toncel (“Joaquín Gómez”).

In conclusion, it was simply a matter of understanding that the Peace Agreement needed time, resources and political will. This has been said ad nauseam by names whose commitment to peace is inescapable, such as the heads of the Government’s negotiating team, Humberto de la Calle and Sergio Jaramillo, or Juan Manuel Santos himself.

However, and despite the resistance of the current Government, the fact that the former guerrilla could participate in politics or be judged by an instrument such as the Special Jurisdiction for Peace, are elements whose magnitude, by itself, justifies the moral superiority of preferring an imperfect Agreement to continuing with an immeasurably violent armed conflict.

The most regrettable thing is that this comes at a time of worsening security and public order, massive violence against social leaders and ex-guerrillas, and deep anger and social polarity. In any case, the FARC ended up facing the mirror of their actions and responsibilities and, undoubtedly, that is the greatest greatness of peace building.

Photo by Government of Chile