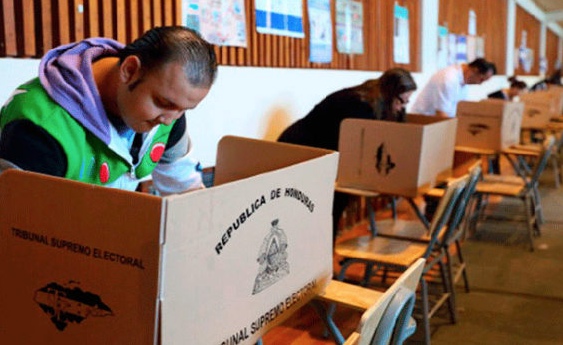 On November 28th, Hondurans were called to participate in the tenth general election, since the return to constitutional order in 1982. More than five million voters are expected to go to the polls to choose national and municipal executive and legislative authorities, as well as representatives to the Central American Parliament. Consequently, in January 2022, a new government will assume the destiny of the country.

Beyond choosing candidates, this election is of crucial importance to determine whether or not Honduras will be able to continue to be considered a country governed by a representative democratic regime. It turns out that, since the irregular interruption of President Manuel Zelaya’s mandate in 2009, numerous reports—especially that of Varieties of Democracy, V-Dem—have warned that the country has fallen into the category of “electoral authoritarianism”. This means that it is a hybrid regime with minimal political competition and participation, and little regard for the rule of law or accountability. This is a political landscape comparable to that of Haiti, Nicaragua or Venezuela.

Also beyond celebrating a civic and republican celebration, the upcoming Honduran elections will determine whether the nation will succeed in getting back on its feet or will continue to be the victim of a very serious democratic erosion. After a “tragic decade” in which all kinds of irregularities were observed, the Honduran people have a magnificent opportunity to correct the course of the State, society and its international insertion.

The Honduran process was preceded by political and electoral reforms that have produced a new institutional framework. Among the main provisions, the creation of a National Electoral Council and a Court of Electoral Justice stand out. There were also some innovations in technology, gender parity, and a cleaning of the census.

Unfortunately, it was not possible to advance in the introduction of the second round of voting, in the so-called “citizenship of the polling stations” or in greater controls on campaign and party financing. In general, such reforms sought to generate transparency and trust, as well as to reassure the integrity and legitimacy of the institutions and the mechanisms of electoral or vertical accountability, a fundamental dimension of the quality of democracy.

The matter is extremely urgent, especially in light of the numerous inadequacies of the last three Honduran general elections. This explains the notorious drop in the index of citizen support for democracy, as shown, among others, by the Latinobarómetro 2021 report that showed a drop in citizen support for the democratic regime between 2006 and 2020 from 55% to 30%. Abstention exceeds 40% of the census and the winners have won with approximately 25% of the valid votes and a narrow margin in relation to the other aspirants.

Consequently, within the framework of this “tragic decade”, Honduras is one of Latin America’s countries with the lowest citizen support for a democratic regime. This is extremely worrisome and represents an involution with serious negative implications for the local population, but as well at a regional, hemispheric and global levels.

Regarding the competition for the presidency, 14 candidates are running, which is an unprecedented number. According to the polls, two of all candidates present real possibilities of reaching victory. On the one hand, there is Xiomara Castro (Libertad Party y Refundación-Libre), who heads a multi-party alliance of center and left-wing parties. Currently, Castro would have between 30% and 35% of the vote intention.

Given that general elections are decided by simple majority, Castro presents the best options to win. In such a hypothesis, it would be the first time in the history of Honduras that a woman becomes president. It is worth adding that Xiomara Castro proposes a reformist, social-democratic and popular government plan for the country.

On the other side, Nasry Asfura, from the right wing National Party (Partido Nacional de Honduras) and former mayor of Tegucigalpa is the candidate of the ruling party. According to polls, he would gain between 20% and 25% of the vote. Although he has some popular support due to his reasonable municipal administration in the country’s capital and the support of President Juan Orlando Hernández, his aspirations are weighed against him by numerous mistakes and abuses, both his own, as well as those of his party and the government during the last three terms.

Thus, it is quite likely that the official candidate will be defeated at the polls and that President Hernández–who has a low and decreasing popular support—will be replaced by an opposition candidate. This would allow a healthy alternation in power.

The remaining aspirants have very few options. However, they can contribute in the field of political-partisan pluralism, in democratic representation and in the formation of the future National Congress. All this would favor the recomposition of the Executive-Legislative relations, the revaluation of the party system and the formation of majorities in the next period.

Other variables that may influence the preferences of Honduran voters are the effects of the pandemic and adverse climate phenomena, as well as social exclusion and political culture. Also relevant is the positioning of social and economic actors, such as the business community, organized civil society, social movements, religious institutions, the armed forces or the mass media.

The international community, through observers from the Organization of American States and the European Union, will contribute to guarantee the integrity and transparency of the electoral process. The governments of Washington and Mexico City are also accompanying and monitoring the process, mainly looking for a valid interlocutor in Tegucigalpa. Basically, two actors that are willing to work with the new government to reduce migratory flows, repress transnational crime, fight corruption and impunity, guarantee social and economic development, and promote an effective, republican and democratic government in the Central American country.

In short, Honduras has the opportunity to reverse the harmful process of democratic erosion observed since 2009. The irregular interruption of Zelaya’s mandate began a “tragic decade” and was one of the first symptoms of the wave of autocratization that eventually engulfed other nations in Latin America and the Caribbean.

The upcoming Honduran electoral process has the potential to define much more than the leaders of the executive and legislative branches. Based on the premise that the general elections will be free and fair, on November 28, Hondurans will decide whether the country will be able to redirect its destiny along the path of representative and republican democracy, or sink into electoral authoritarianism, caudillismo, ungovernability and barbarism. In my opinion, the Honduran people can and deserve to build a democratic recomposition, ensure the transfer of power to a new political leadership and move towards a better future.

Researcher-Collaborator of the Department of Latin American Studies at the University of Brasilia. (UnB). Doutor in History. Specialized in issues about quality of democracy, international politics, human rights, citizenship and violence.