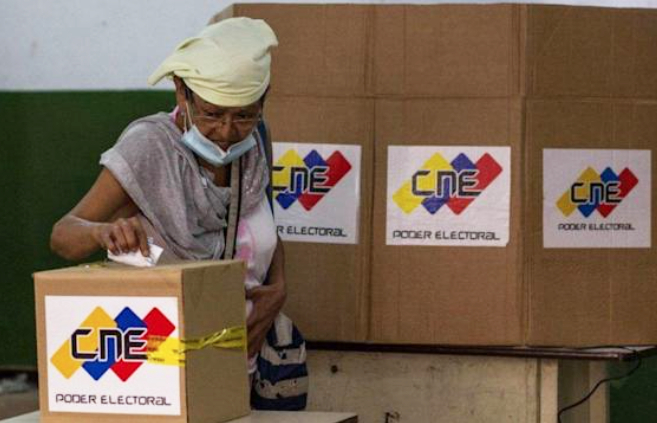 The result of the regional elections held on Sunday, 21 of November in Venezuela—where people chose to renew executive and legislative bodies of states and municipalities—did not constitute a substantial change in the political scheme of the country. And while this is not good news for the opposition, the result is neither positive for the government.

Beyond some tepid improvements, including the momentary suspension of both political imprisonments and the disqualifications of parties, the Venezuelan electoral system is still far from being minimally competitive. This has been documented, once again, by the international electoral observatory in its preliminary statement.

Venezuela is being framed as a hegemonic political system that maintains precarious structural conditions for any candidate that is not in the official party. Arbitrariness is common, as demonstrated with the failure of the National Electoral Council (CNE) when complying with its own deadlines to publish the results of the governorship of Barinas.

The languishing electoral performance of Chavism

Historically, regional elections in Venezuela didn’t have the same interest in participation as the presidential election. This, in many occasions, has been capitalized electorally by the government, which abusively used economic, logistic and communicational resources to promote its candidates.

Of the 23 governorships in the country, the ruling party has won 19 so far, while the opposition has won three—pending the results of Barinas. On the other hand, of the 322 town halls in the country, Chavism won 205, while the remaining 117 were gained by politicians not aligned to the officialism. This number of opposition mayoralties doubled that obtained in the 2008 regional elections in which the opposition worked in a unitary electoral formula.

In this election Chavism also obtained the lowest records of support in the rural and peripheral areas of the country, regions in which its electoral strength has been traditionally based. However in these times, the pandemic, the humanitarian crisis and misery are hitting harder, while the social recovery is more difficult and the official promise is less convincing. This could be observed in the arbitrary awarding of candidacies reported in the primaries of the United Socialist Party of Venezuela.

The oppositions and their electoral reflection

In light of Chavism’s internal situation, it seems that its main strategic bet was not to improve its own candidates or renew its message. It rather insisted on the division of the opposition. The ruling party not only tried to influence the cleavage between electoralists and abstentionists, which dates back to late 2017, but also between the candidacies that were presented. In this way, the opposition ended up subtracting votes from each other, with the most notorious cases being the Libertador Municipality in Caracas, Miranda, Merida, Tachira and Bolivar.

Did the government finance these divisive campaigns? Perhaps we will never know it since the current electoral law says that sponsors and campaign contributions are only declared to the CNE, but they aren’t made public.

The opposition coalition, Mesa de la Unidad Democrática, which was the most voted option in the 2015 parliamentary elections, today is a shadow of its former self due to the deep and public divisions of its leadership and militancy. Since the call for this year’s elections, the communication incoordination, the disorganization and, above all, the indiscipline in the internal management of their differences, eroded the credibility of many of their candidates. In view of this situation, the new party Fuerza Vecinal emerged and in its first year of existence it has won the governorship of the state of Nueva Esparta as well as seven other mayoralties.

Against this backdrop and in spite of the lukewarm victory of the ruling party, it would seem that the results once again suggest possibilities of re-articulation in the opposition. Even some of its spokespersons have mentioned, once again, the need for a strategic unification around the electoral mobilization as a mechanism of political aggregation.

In sum, the results of these regional elections could constitute a turning point in the rearrangement of the segments that make up the opposition in light of future scenarios. In the meantime, those Venezuelans that do not migrate, remain demobilized, unassisted and coping with life as best they can in the midst of a deep humanitarian crisis.