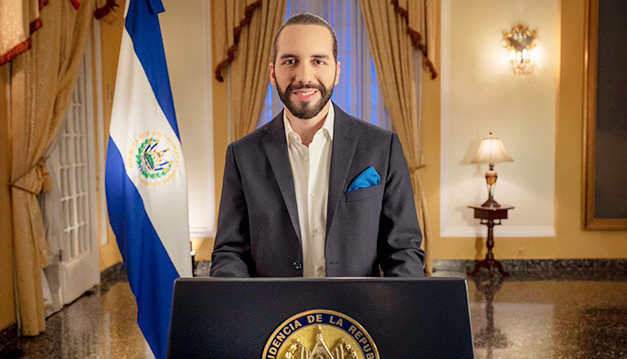 Bukele is one of those people who awaken passions. Either you love him, or you hate him. It is not common being indifferent to his character. To date, he is the most popular president in the country’s democratic history. Neither his many mistakes as president nor his notorious authoritarian vocation have made a dent in his popularity. And although it is true that he no longer attracts as much support as he did at the beginning of his administration, this decline has not been very significant.

The qualities of the young president

Nayib Armando Bukele Ortez, born in 1981, became a star who, apparently, could do everything to move the country forwards. A very well-orchestrated electoral campaign, plus a perfectly studied presence in the social networks gave him in the elections of February 3, 2019, what he and his environment were longing for: the presidency of the republic. The electorate did not notice the several complaints against him as mayor of Nuevo Cuscatlán and San Salvador for corruption, nepotism, misogyny, and abuse of authority.

The Salvadoran president came to power in a context marked by the ineffectiveness and corruption of the previous governments of the National Republican Alliance (ARENA) and the Farabundo Martí National Liberation Front (FMLN). These governments undermined the hopes of a population that, tired, gave in to the siren songs of a young, but not inexperienced, businessman and politician who had just become mayor in Nuevo Cuscatlán and in the capital, San Salvador.

The president, who with his arrival to power broke the bipartisan hegemony that had prevailed since the end of the civil war in 1992, has governed at the pace of social networks, but he has warned that it’s not enough. Both he and his brother Karim, practically his right-hand man, are skilled in communications. Nayib is so because of his charisma and his histrionic capacity, while Karim is so because of his intelligence and sagacity when it comes to devising a campaign.

“In this long year and a half of the presidency, Bukele has demonstrated that his vocation is not dialogue, but confrontation, slander, lies and persecution”. This is how a former colleague of the current president describes it, from when he was one of the rising figures of the FMLN. This source, for security reasons, has requested anonymity.

His “squeezing” of the National Assembly, as well as the invasion of its headquarters together with the military and police, can be considered violations of the independence of powers that the National Constitution marks. However, there is so much discredit in politicians and institutions that few raised their voices to denounce such an outrage. “On this, President Bukele bases his actions”, expresses the same source.

Corruption: nothing has changed

The renowned Salvadoran political analyst Napoleon Campos expresses that during the pandemic, (Bukele) exhibited the same pattern of corruption of his predecessors. “At this point, the Attorney General’s Office of the Republic (FGR) has accumulated more than 17 files on anomalous and irregular purchases typical of corruption involving ministers such as those of Health, Agriculture and Livestock, Public Works and the Environmental Fund, among others”.

Campos adds that, as if these were not enough, in the face of international accusations of violating the rule of law and judicial independence – in particular the accusations of US congressmen and members of the European Parliament – “Bukele has not desisted in undermining the foundations of democracy”, while the economy has collapsed by 9.0% or more as indicated by the World Bank and the IMF. Within this framework, “the country has begun to see foreign aid programs such as the US Millennium Fund cancelled, and other programs may be in danger of not being rectified…”, the analyst consulted concluded.

President Bukele has appealed from day one to some of his brothers and other relatives as advisors and operators of his full confidence. Nayib has nine siblings, but only three of them, the younger ones, constitute the main core that surrounds him, advises and operates on his behalf. They are: Karim Alberto (33 years old), and Yusef Alí and Ibrajim Antonio (twins of 30), all of them children of Armando Bukele Kattán, who died in 2015, and Olga Marina Ortez.

None of them hold public office, meaning that they are not government officials, but operate with total ease and freedom with the explicit or tacit approval of the president. Since they do not hold public office, they are not subject to any of the comptroller’s laws that allow for the evaluation of the conduct of officials and are therefore exempt from political prosecution.

Nayib and Karim are the strategists that define the direction of the Presidency. Meanwhile, Yusef and Ibrajim are advisors who deal with specific areas. While Yusef works on the economic cabinet, Ibrajim is in charge of the negotiations with economic groups and of the special missions of his brother Nayib, among which the projects of economic reactivation stand out. For her part, Gabriela Rodríguez, the president’s wife, is in charge of the social cabinet, an area that is usually the favorite of the first ladies.

Bukele has reached the top of his country’s political-institutional life thanks to the population’s weariness in the face of the galloping corruption and inefficiency of the ruling class, and a very intelligent media campaign.

However, after a year and a half of administration, the president has not shown himself to be inclined to introduce deep and positive changes in a country plunged into poverty and hopelessness. “A people like the Salvadoran people, known for their capacity for work and initiative, will not follow this president for much longer, since he does not respond to the most pressing needs or fulfill his campaign promises,” says a Central American diplomat stationed in San Salvador, who wishes to reserve his identity.

And although the president still maintains high approval ratings, a decline is noted, which, although not significant, “is taking the form of disenchantment,” the diplomat concludes.