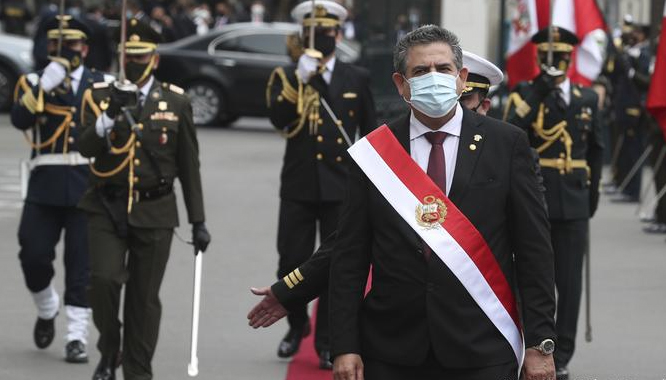 I am writing this article after the swearing in of Manuel Merino as President of the Republic of Peru on November 10. Let us recall that in July 2016 Pedro Pablo Kuczynski assumed the presidency, for a period of five years, but resigned in March 2018, in view of the imminent declaration by Congress of the vacancy of the office of President invoking his “permanent moral incapacity” (Article 133 of the Constitution). The first Vice President, Martín Vizcarra, assumed the presidency, but the confrontation with Congress did not cease, which triggered its constitutional dissolution in September 2019 (and the resignation of the second Vice President, Mercedes Aráoz) and the holding of new legislative elections in January of this year. It is this Congress that has declared Vizcarra’s “permanent moral incapacity”; while the second Vice President had already resigned from the post, the next in line of succession was the President of Congress, now President of the Republic.

Let’s start analyzing things from the most immediate and try to get to the bottom-line implications. On the morning of November 9, the day on which the second motion of vacancy of President Vizcarra would be voted, the forecast was that it would not be approved. The first motion, on September 18, received 32 votes in favor, 78 against and 15 abstentions, and in reality, things had not changed substantially in those three weeks.

these are serious allegations that certainly deserve a thorough investigation by the Prosecutor’s Office, but are still in a preliminary phase.

At first, the media had reported several complaints about the irregular hiring of professional services in a ministry that allegedly involved President Vizcarra himself, and then others about the alleged payment of bribes to him while he was Governor of the Moquegua region between 2011 and 2014. In the latter case, these are serious allegations that certainly deserve a thorough investigation by the Prosecutor’s Office, but are still in a preliminary phase.

Considering that general elections have already been called for April of next year, and that according to opinion polls 95% of those interviewed agree that Vizcarra should be investigated by the Prosecutor’s Office and end his government (October survey by the Institute of Peruvian Studies), and that key parties had announced that they would vote against the vacancy, there was some calm regarding the outcome of this vote.

However, somewhat unexpectedly, the ambition of short-term power ended up taking precedence, and so a vote was reached in which the vacancy reached 105 votes in favor (19 against and 4 abstentions). The changes of position and the high vote obtained are the result of a kind of political agreement, a kind of parliamentary “repartija”, which will be expressed in President Merino’s Council of Ministers, and in the appointments of officials that are planned for the coming weeks and months.

Despite the fact that the declaration of a vacancy by Congress has a very dubious constitutionality in the framework of a presidentialist regime, based on an exaggeratedly elastic and risky interpretation (because of the instability it implies for any president without a parliamentary majority), Vizcarra announced on the night of November 9 that he would leave office.

This decision could have been influenced by the fact that a challenge to the constitutionality of the Congress’ decision would not have prevented President Merino from being sworn in the next day; something similar, but in the opposite direction, occurred with the dissolution of Congress in September 2019: the congressmen denounced the unconstitutionality of the dissolution, but the legal resources they filed (and which they eventually lost) could not prevent its closure and the calling of new elections.

If we look at things from a broader perspective, it could be said that this episode is part of a series, begun in July 2016, with the election of President Kuczynski. On that date, when looking at Peru from a political angle, it could have been said that the most striking feature of the country was the remarkable continuity of market-oriented policies, begun in the 1990s, despite the victories of candidates with critical discourses of neoliberalism, such as Alan García in 2006 and Ollanta Humala in 2011. And of the remarkable, by Peruvian standards, democratic continuity since 2001, despite the extreme precariousness of its parties, the non-existence of a party system proper, and the scant legitimacy of political institutions.

What has changed? First, the deceleration of economic growth, which has been evident since 2014, cracked the neoliberal consensus, which had been fairly cohesive up to that point. Second, Fujimorism, which had been a “guarantor” of the market economy in 2006 and 2011, changed profoundly after losing the 2016 presidential election, in which it obtained an absolute majority of parliamentary representation. What was perceived as an opportunity to launch a “second generation” of market-oriented reforms, turned into a growing confrontation between the executive and the legislature, which led to Kuczynski’s resignation, and then to the dissolution of Congress by Vizcarra.

The election of the new Congress in January of this year, in which the government did not present any candidates or obtain any representation, seemed to calm the waters relatively

The election of the new Congress in January of this year, in which the government did not present any candidates or obtain any representation, seemed to calm the waters relatively (a Congress with a short mandate, in which a certain fragmentation of the vote and the predominance of moderate positions prevailed) but the Covid-19 quickly changed the panorama: Peru was one of the countries in the region that had been hit hardest by the epidemic, both in terms of health and the economy, which encouraged the development of populist (and rather demagogic) positions in all benches, which generated a growing distance from the executive branch.

Thus, initiatives that had not been seen in Peru in the last thirty years began to appear in Congress with broad consensus, openly challenging the pro-market consensus that distinguished Peru in the context of the region. A reality was revealed in which parliamentary representation is very individualistic, populated by multiple particularistic interests, some of which are linked to sectors that are very opposed to any attempt to change the status quo.

This type of representation, on the one hand, found a brake on the policies of the Vizcarra government, and on the other, was affected by some of its reform initiatives. With all its limitations, Vizcarra promoted a judicial reform, a political reform, an educational reform, which generated resistance in conservative sectors and also with some corruption networks. In addition, there are sectors close to Fujimori that lost out with the closing of Congress last year. President Merino now represents this constellation of interests.

It is this confrontation that distanced the Congress from President Vizcarra, and that made it fall, without tools to face an opposition majority. Thus, we are not only facing a temporary crisis, but the possibility of witnessing the beginning of the end of a longer cycle, started thirty years ago.

What will come in the immediate future? Unfortunately, there is not much room for optimism regarding President Merino’s administration. And we can only cross our fingers so that the 2021 elections, which are being held in the midst of great dispersion and uncertainty, will generate a result that will allow the next government a minimum of viability to face the challenges left by the health emergency, the need to reactivate the economy, and institutional reconstruction.

Political scientist. Senior Lecturer at the Catholic University of Peru (PUCP) and researcher at the Peruvian Studies Institute (IEP). PhD in Political Science from FLACSO-Mexico.