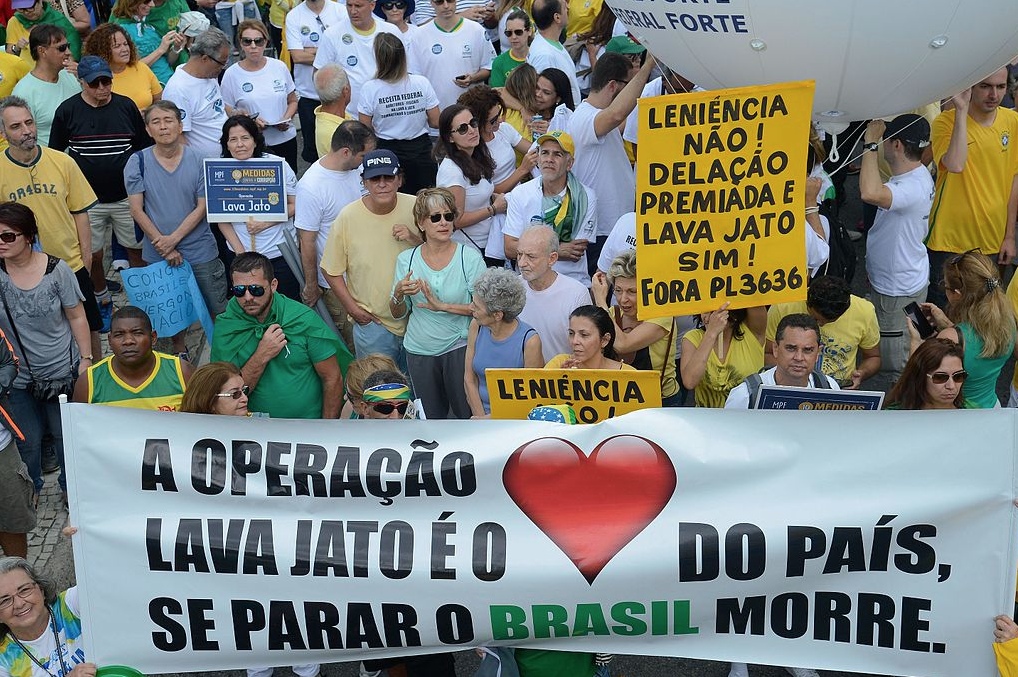 Jair Bolsonaro would hardly occupy Brazil’s presidential seat should not have been for Operation Car Wash (Operação Lava Jato). Supposedly aimed at fighting corruption, the operation is replete with procedural irregularities and chose to target, rather than simply follow, the clues and due process of law. Treating politics as a crime and the Workers’ Party (PT) as a gang were central elements in creating the “right climate” for the 2016 coup d’état, through an impeachment process without the necessary legal conditions. The biased trial of former president Lula led to his imprisonment without evidence, elevating Bolsonaro as the frontrunner in the 2018 presidential elections.

The shadows of Operation Car Wash

The main actors in Operation Car Wash were the then judge Sérgio Moro and the prosecutors of the Public Prosecutor’s Office in Curitiba, especially the coordinator of the operation, Deltan Dallagnol. The judge and prosecutors agreed among themselves on strategies, selectively ignored information, expressed in conversations their wish that the PT would not win the presidential elections, and abused the instrument of effective cooperation.

All of this was exposed in The Intercept Brasil’s series of reports, known as Vaza Jato, after obtaining conversations between these characters on the Telegram app. Later, new dialogues came to light following the federal police’s operation Spoofing. The confessions obtained through mechanisms of cooperation or effective collaboration were deliberately used to construct a narrative that would lead to Lula’s conviction. These mechanisms were meant to be an incentive for some criminals to help unravel the big plots.

To say what the Public Prosecutor’s Office wanted to hear, whether it was true or not, whistleblowers were sometimes given advantages totally unrelated to an effective commitment to fight corruption, and sometimes suffered psychological torture, in a clear abuse of human rights. Alberto Youssef, an important money launderer, whose combined sentences would exceed 122 years in prison, managed to stay in jail for only three years, with the retention of several properties declared to be the proceeds of his own crimes.

On the other hand, less important whistleblowers for the corruption scheme were preventively detained and threatened to be transferred to dangerous prisons if they did not “spontaneously” collaborate. In a 2017 conversation, Deltan Dallagnol mocked the “effectiveness” of preventive detentions as a tool to pressure those under investigation to accept plea deals.

Former Petrobras executive Pedro Barusco, who was one of the first whistleblowers in Operation Car Wash back in 2014, had denounced a bribery agreement between company employees, politicians and representatives of contractors. However, Dallagnol and his fellow prosecutor Athayde Ribeiro Costa were dissatisfied with the fact that the whistleblower’s statement allowed the Progressive Party to be included among those implicated, but not the Workers’ Party. They decided to make a new agreement, leaving Barusco without any serious penalty, so that he could make a new denunciation, which would have extracts written by the prosecutors themselves.

Moro, Dallagnol and political prospects for the 2022 election

Sérgio Moro asked for his exoneration as a federal judge in 2018 to become Bolsonaro’s own justice minister, with whom he broke relations two years later over power disputes. Dallagnol has asked the Federal Prosecutor’s Office for exoneration in November 2021. His goal, like that of Moro, must be to continue in politics, but this time by electoral means, and not by manipulating the judiciary.

The former judge of the Lavatist inquisition has presented himself as a likely candidate for the Presidency in the 2022 elections. Dallagnol’s political ambition is not yet known.

The only thing that is known is that he likes money. An article in Intercept Brasil showed that Dallagnol and his partner prosecutor Roberson Pozzobon were organising  a business plan in 2018 to profit from events and conferences paid from their fame and contacts gained through Operation Lava Jato. They would use family members as owners of the company to avoid legal enquiries and were thinking of creating a “non-profit” institute to pay fees for themselves.

In 2019, the Federal Prosecutor’s Office in Paraná was trying to reach an agreement with Petrobras and the US government for the state-owned company, the subject of the Lava Jato investigation, to pay 2.5 billion reais to a private fund to be managed by Deltan Dallagnol himself and his collaborators. Now that he has resigned his high salary as a prosecutor, it is not known whether he will try to become a deputy or dare to seek a seat in the Senate—or even shoot for governor of the state of Paraná.

Sérgio Moro has been seen as a possible name of the “third way”, against Lula and Bolsonaro, by sectors of the press that have always published laudatory and uncritical news about the Lava Jato operation. Nowadays you no longer see demonstrators in the streets wearing yellow T-shirts with his face and calling him a hero, or even montages of him in a Superman suit. But with Lula’s favouritism and the certainty of polarisation, it is the space of being the enemy of the PT and defender of punitivism that will be in dispute. Moro has some potential to re-attract part of the reactionary base disillusioned with Bolsonaro and occupy that space.

The political platform of Moro and Dallagnol in an election campaign is predictable: much scaremongering against corruption, advocacy of more prisons and harsher sentences, criticism of ‘excessive’ bureaucracy in Brazilian criminal law and dissemination of the idea that the political class is all corrupt and needs to be replaced by non-politicians.

The democratic rupture of 2016 empowered conspiratorial and authoritarian figures. First, the then vice-president Michel Temer, whom everyone calls a “vampire”, became president without being elected. Then Jair Bolsonaro had a safe political run for the presidency, without Lula in the way.

Bolsonaro is often referred to as Bozo (clown), but the level of destruction he has caused brings him closer to more terrifying clowns, like Pennywise or other made-up killers that populate the movies. February saw the dismantling of the Lava Jato operation, already discredited by all the arbitrariness and bias revealed. But in this horror movie that Brazil has been living since 2016, the death of Lava Jato may not be definitive. It may come back as a zombie, with the candidatures of Sérgio Moro and Deltan Dallagnol in prime time.