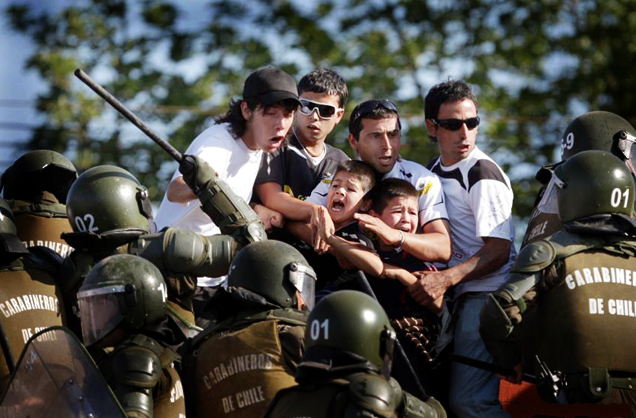 Last week again a person suffered the loss of an eye during a protest in Santiago de Chile. A photojournalist, who was keeping records of the demonstrations, joins the shameful list of hundreds of eye victims since the beginning of the October 2019 revolt. This happens shortly after the return of the Minister of Foreign Affairs, Andrés Allamand, who walked through different countries in Europe trying to clean up the international image left by the government of Sebastián Piñera. Praise for the constituent process, the inevitability of social upheavals in countries that “progress” and the positive image of the country abroad were part of the discursive battery deployed by the Foreign Minister. Needless to say, the four reports of human rights violations that occurred in the country in the last year were not a central part of his journey.

Currently, thanks to popular mobilization, the country has become involved in a Constituent process of unprecedented characteristics. There are and will continue to be, as is to be expected, discussions that hegemonize public debate such as who will be able to participate in the process; how the constituents will be elected; the implementation of parity, quotas reserved for indigenous people, the election of candidates, the formation of coalitions and alliances, among many other topics.

it is not without significance that in the 21st century the distinctive characteristics of the State’s response are the use of violence and human rights violations.

However, despite this democratizing transit that seeks to change the Constitution, it seems not only necessary, but imperative, to learn from our recent past. That the right wing, heir to Pinochetism, denies, trivializes or makes invisible human rights violations is not new. But it is not without significance that in the 21st century the distinctive characteristics of the State’s response are the use of violence and human rights violations.

The extensive use of repressive practices was believed to be a thing of the past. At least for the common people who considered that the police actions that left a sad toll of death, torture, mutilation, and massive repression had been eradicated and were incongruent with democracy. This is true for the majority, since the Mapuche communities and organizations that are politically active have been denouncing the harassment, militarization, criminalization, and racism that the Carabineros systematically suffer.

In the imaginary war against the internal enemy, also imaginary, that President Piñera declared on October 21, 2019, no resources have been spared in vehemently and violently protecting the status quo, resorting to the Armed Forces, the Investigative Police, but mainly the Carabineros as the institution at the head of the repression. The ethically reprehensible or directly criminal action of the police, however, is not new and has resulted in a progressive and lapidary discrediting of the citizenry.

Nor are the concepts and ideological practices of war and the internal enemy already used by the dictatorship, which resulted in a myriad of killings, disappearances and torture, new.

Despite this, in the transition that was agreed upon with the dictatorship, there was little justice. Many of the human rights violations perpetrated by the security agencies remained unpunished and usefully forgotten, leaving phrases such as “justice insofar as possible” of former President Patricio Aylwin for transitional memory. Or the warnings about the impossibility of investigating torture that occurred during the dictatorship, as the then Minister José Miguel Insulza stated.

However, thanks to the persistent work and dedication of organizations that were part of the then strong human rights movement, the state was pressured to make two important contributions to the country’s historical memory. The report of the National Commission on Truth and Reconciliation (Rettig Report) which addressed executions, disappearances and political violence after the military coup. And the report of the National Commission on Political Imprisonment and Torture (Valech Report) which addressed the abject torture and degrading treatment carried out by agents of the dictatorship during its 17 years.

Both reports were relevant because they exposed many of the falsehoods built up since the dictatorship to justify the horrors committed. However, neither report provided data on the perpetrators of the violations, despite the numerous testimonies collected. There was partial truth, but no justice. There was memory, but not justice.

It is vitally necessary to intervene with the Carabineros

In a country that for decades has shown itself to be an epitome of democratic quality, the repetition of denialist discourse about human rights violations and the omnipresent possibility of impunity for the crimes committed is not acceptable. It is vitally necessary to intervene with the Carabineros, an institution that according to the CEP survey has gone from having relatively high levels of institutional confidence (57% in 2015), to being one of the institutions that produces the most mistrust (17% in December 2019).

This is due to the media exposure of the million-dollar corruption case involving high ranking officers of the institution, where a group of special forces tried to hide the murder of a Mapuche community member in 2018 and the frame-up of eight imprisoned Mapuche leaders with false evidence, in 2017. This added to the actions of the institution in the framework of the protests unleashed since October, in which for 88% of Chilean Carabineros human rights were violated.

This leads us to ask ourselves at what point these situations stop being “just isolated cases”, as argued by the government, and are only representative of a systemic evil? Or, to put it another way, shouldn’t the Carabineros be urgently intervened by the civil power or be directly refounded? Possibly this would be the only way for the institution, or another that succeeds it, to enjoy legitimacy in the eyes of the citizenry.

On Wednesday, December 14, a journalist surprised President Piñera by asking him: how can you continue to govern with 7% approval? Beyond the iterative common places of his answer, one might ask if it is not the bullets, the gas and the repression of the Carabineros. All of which are unacceptable in a real democracy.