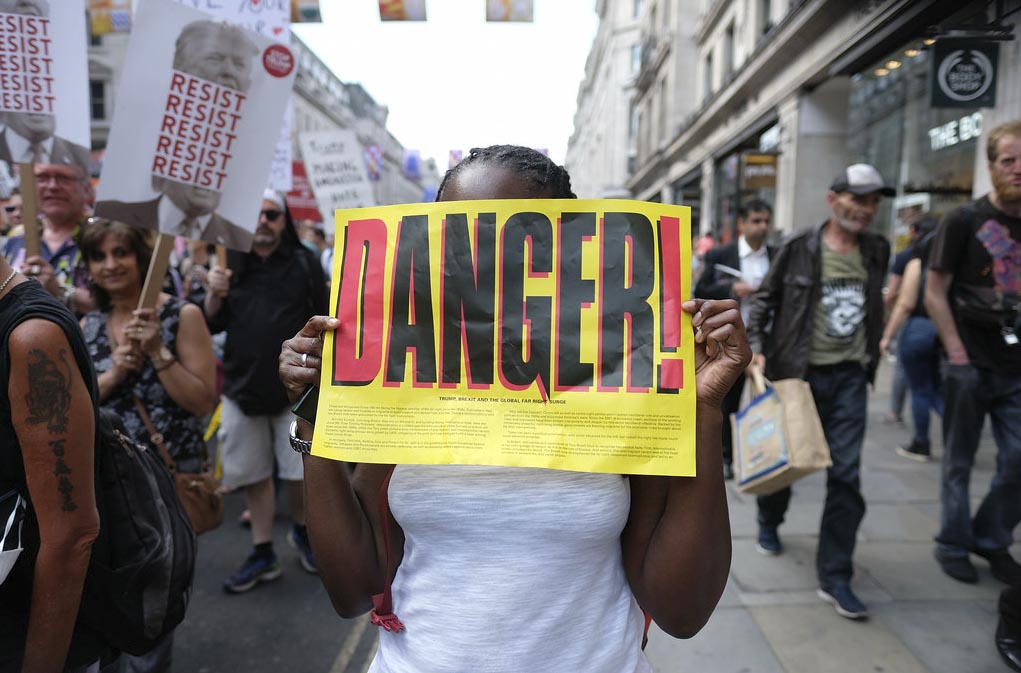 To believe that Biden’s triumph is the end of the drama that has unfolded since January 2016 is an example of a mirage with fatal consequences. Pretending that those millions of voters, who have followed Trump to the end, will disappear from the map on January 20 with the inauguration of Biden and Harris reveals a blindness to how much America has changed in recent generations. But what is even worrisome is not the survival of the ideology of those who elevated Trump. But the enigma is how that long third of the electorate occupied a vital territory?

Numerous observers of the evolution of the American political soul raised voices of alarm in recent months. They wondered about the dangerous conversion of the United States political system into an unusual imitation of the fabric existing in other countries that had fallen into the nets of authoritarianism.

Worse still is they had been swallowed up by the extreme ideologies that appeared in Europe in the 1930s. These drove countries with a long cultural tradition to turn into totalitarian dictatorships. These voices advanced the comparison of what was happening by applying Trump’s whims, turned into policies that resembled the practical programs of the Hitler regime since 1933.

In the society of the United States at the beginning of the new century, the existence of broad sectors that felt cornered, disappointed, and isolated began to be detected.

In the society of the United States at the beginning of the new century, the existence of broad sectors that felt cornered, disappointed, and isolated began to be detected. They were not the traditional enclaves of racial minorities or remnants of European immigrants who had not fully fitted into the social and economic fabric.

They were, so to speak, “full-blooded Americans.” They saw that the American dream was beginning to turn into a hurtful nightmare, from which they could not wake up despite having faithfully complied with the report card that the system had given to their parents or grandparents.

Wages were not keeping up with the rising cost of living. Mortgages ate much of the income. If they were inhabitants of rural areas, they felt trapped by invisible borders. If they grew up with a basic education, access to college was limited by their income or the stratospheric cost of private institutions. An explanation had to be found for this apparent scam.

That was not the America, in short, that they had been promised. It was urgent to find the culprits for this fraud. In addition, it was necessary to detect the existence of new leaders who would not be that hateful and corrupt establishment in Washington. Suddenly, they were orphans from another direction, whose space was occupied by an “outsider”, Donald Trump. He arrived pristine, without the blemish of traditional politics. It guaranteed the decontamination of the Washington swamp.

In a reasonably educated nation, it would truly be a feat to have followed the tunes of a flute player, who had revealed the causes of their misfortune.

In a reasonably educated nation, it would truly be a feat to have followed the tunes of a flute player, who had revealed the causes of their misfortune. As Hitler enthralled a cultured people like the troubled interwar Germans, Trump fascinated the Americans with his simplistic solutions.

In Germany of 1930s, urban decay was attributed to the alleged capture of certain businesses by Jews. The solution began with the breaking up of the shop windows, the prohibition of certain professions, and finally imprisonment. The German people, educated and disciplined, swallowed the lie without question.

The regime accurately sold the supposed need to expand the territory by the call of the Lebensraum. The simple solution was the Anschluss of Austria, and then the bite into the ethnically German territories in Czechoslovakia. The people applauded, but did not seem satisfied: Poland had to be invaded and then respond to the Anglo-French protest with the forceful Blitzkrieg. The German people cheered, as Hitler paraded triumphantly around the Arc de Triomphe.

As Trump ascended the throne, many Americans who had been drawn to urban areas found that the neat neighborhoods of the suburbs ended up being contaminated by the invasion of racial minorities, previously hardly detected. They felt uncomfortable sharing the space with blacks and, what was more hurtful, with Hispanics, who also spoke an incomprehensible language. And most of them were accused of being drug traffickers.

The remedy from the White House was to close the border to the invaders with a wall. Trump also promised that the Mexicans themselves would pay for it. He continued by dividing the families of those who had already entered, making it difficult for them to attend university, and delaying their citizenship to the maximum.

The “lifelong Americans” were enthralled. And the Republican Party was satisfied with the renewal of its positions in the Senate. Arbitrary measures bordered on unconstitutionality. But the goal of “making America great again” became the central watchword.

In the Germany of Hitler’s rise, everything was subordinated to the very end of reestablishing or inventing the glories of the past, to the chords of a Wagner opera. The absence of questioning the sovereignty of the Fuhrer guaranteed the fulfillment of the script.

Believing itself to be the best nation in Europe justified the madness of the invasion of the Soviet Union, without realizing that such an operation caused the downfall of Napoleon. The National Socialist Party guaranteed order and the SS inherited the role of the Brown Shirts to tame the Wehrmacht that swallowed up the professional military, who had not digested the defeat of 1918 well.

The disaster that began in Stalingrad and culminated with Russian troops raising the flag at the top of the Reichstag, was riveted by Allied bombardments that left Dresden and Hamburg in ruins, populated by millions of wandering soldiers, while the furnaces were still smoking in the death camps and a million German women of all ages were raped. The sentence was so forceful that only in this way did the Germans learn their lesson and became a model of cooperation in Europe and the world.

But it is unknown how the application of the same strategy could have ended if Trump’s misrule plan had followed the same path. Now only the seventy million who have voted him to “make America great again” have remained silent. But the SS in the Republican Senate and the recent infiltrators in the Supreme Court also remain unscathed. It’s a gigantic denazification task for Biden, without Nuremberg-style trials.