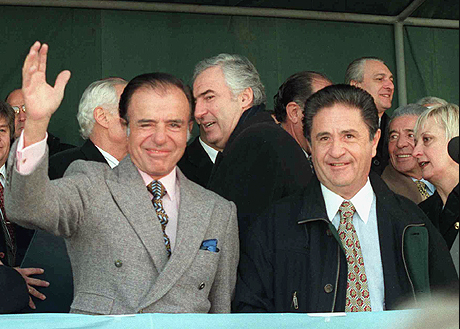 Since the recovery of democracy in December 1983, Argentina has demarcated its political cycles according to the rhythm of electoral periods and presidential mandates, always running (to borrow an image of Giovanni Sartori) “with a single-engine locomotive”. Presidentialism -that locomotive- shaped these cycles, but also the very characteristics of the political culture, the evolution of the party system, the leaderships and the government experiences which, throughout four decades, went through -in different contexts and with different luck- comparable stages of ascent, stability, prolongation and crisis.

That of Carlos Menem, the former president who died this Sunday, February 14, at the age of 90, was the longest: he governed from July 1989 to December 1999, covering the entire decade of the ’90s, when the world emerged from the Cold War and Latin American countries faced the challenge of inserting themselves into globalization. Years later, at the beginning of the 21st century, Néstor Kirchner and Cristina Fernández, husband and wife, took up the legacy -and the aftermath- of that experience and put their differential stamp on it, recomposing that locomotive and reorienting it in another direction, adapted to a different international context.

The first change of government, from the radical Raúl Alfonsín to the Peronist Carlos Menem, in 1989, was traumatic, but at the same time, it meant the first change of power by popular vote since the Sáenz Peña Law came into force. “Menemism” was responsible for piloting the entry into the ’90s and was, in its own way, Argentina’s response to the challenges of the crisis of the State and globalization; A hyper-presidential and decision-making model that started promising a “productive revolution” back to traditional Peronism and produced a Copernican turn facing drastic neoliberal reforms, a “conservative-popular revolution” with two pillars -drastic privatizations of all public enterprises and the peso-dollar convertibility- with its two brains and bishops: Roberto Dromi and Domingo Cavallo.

Thus, Menem managed to stabilize the economy and was re-elected in 1995, through a constitutional reform agreed on by the former president and leader of radicalism, Raúl Alfonsín. But his second government reached its peak and began to run out of steam in 1997, when he lost the mid-term elections. Then came the second alternation, in 1999, with the triumph of the Alliance between the UCR and Frepaso, which brought Fernando De la Rúa to the presidency.

But this government experience turned out to be frustrating and ended up being more the prolongation of the 90’s than the beginning of a new cycle: the crash at the end of 2001, the resignation of De la Rúa in the midst of the social outbreak and the end of convertibility, led to the presidency of Eduardo Duhalde, Menem’s first vice-president, who emerged from the Legislative Assembly (2002-2003).

The curious thing is that in the 2003 elections, Menem ran again and won in the first round, with 24% of the votes. If he does not return to the presidency, it is because of the constitutional reform of ’94, which enabled him to be reelected, but introduced the second electoral round. With 76% against, he would never have achieved a majority. With Peronism divided into three fractions, he desisted from continuing in the race and that is how Néstor Kirchner became president. A great lesson on how institutional rules can contain and tame the personalism of leaders: it is not enough to be the first minority to win. And even less to govern.

In one sense, “Menemism” was more than Menem’s two terms in office: it represented a way of seeing and understanding politics that transcended Peronism. But it was also, in another sense, less than this: a sector with its undisputed and revered leader, who gradually lost his predominance and ended up being devoured by his successors, who grew under his influence.

The main one was a revelation: a governor from Santa Cruz, who accompanied Menem during all those years, inherited some of his distinctive features and built a new presidential leadership destined to be prolonged in time with the help of his wife Cristina Kirchner. And so, “Kirchnerism” kept the former president in its space, as a quasi-vital senator, while at the same time it did not cease to show itself as the antipodes of his iconic decade.

Carlos Menem, the president who ruled the longest time uninterruptedly in Argentine history, surpassing Juan Domingo Perón himself, left his mark on the course of democracy. Also, of its distortions, pending issues and unfulfilled promises. And in this sense, it can be said that the two “halves” that polarized the politics of this country in the last decade: Kirchnerism and anti-Kirchnerism, are daughters of that experience. That of a democracy that surrenders to the virtues and fortunes of its leaders and only matures when they enter their phase of decline.

*The original version of this text was published in Clarín, Argentina.

Photo by the Presidency of the Nation