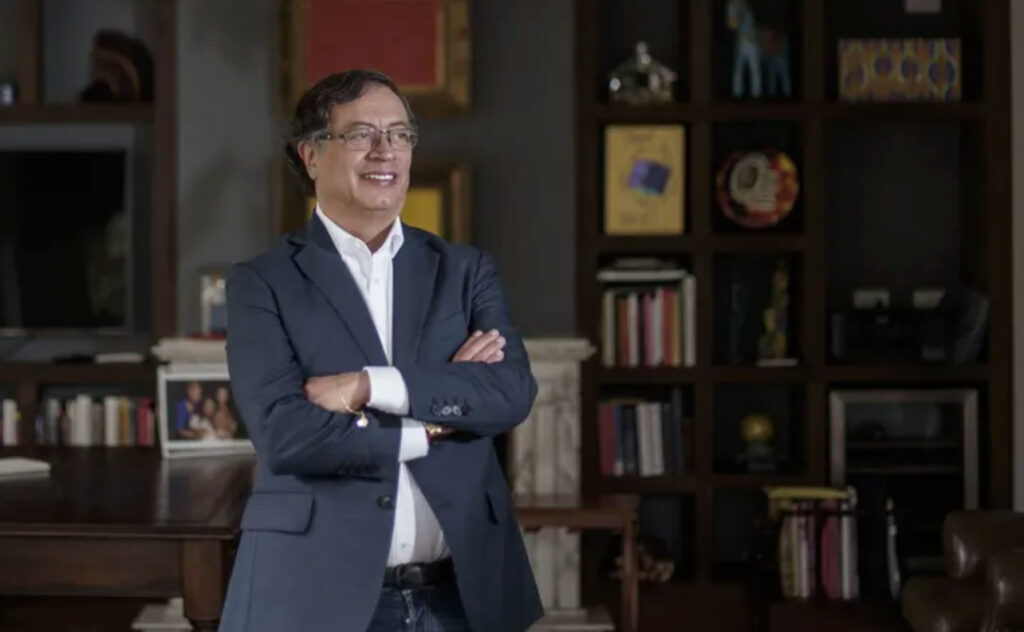 In the last twenty years, except for the second term of Juan Manuel Santos, Colombians elected presidents affiliated with Uribism. Santos, who describes himself as a follower of the Third Way, of Giddens and Blair, interrupted that continuity, resulting in the culmination of the peace process with the FARC. However, in many other aspects, such as his economic policy and his alliances with strongly clientelist parties, his policies were a continuation of those of the Uribist right. The election of Gustavo Petro as Colombia’s new president, however, does embody a substantial shift.

It is a shift in several senses. In the first place, with respect to the core of the Uribist project: its anti-communism. Uribism convinced many citizens that the guerrillas were the cause of all the country’s ills and that, had it not been for the Deus ex machina of the providential arrival of Alvaro Uribe, the country would have fallen into their hands. The blurring of the boundary between the legal and illegal left was one of the consequences of this effective narrative. Every project associated with the left, and every form of protest, was interpreted as a continuation of guerrilla action. The triumph of the Historic Pact, the alliance of forces around Gustavo Petro, therefore marks a break with this scheme of interpretation of reality, since now, it will be the legal left, led by a former guerrilla, the one governing.

The rhetoric of “castrochavism” has been exhausted and the Colombian right-wing, whose only singularity is the offer of protection against the multifaceted ghost of communism, does not have much more to offer. That is why Petro refreshes the ideological scenario with his environmentalist discourse, in favor of peace, solidarity, and the inclusion of minorities. If political changes are not exhausted in the changes of government, but in the ideological changes that animate political and social institutions, and structure the judgments of millions of citizens, on June 19 Colombians will witness a significant moment. It will be the institutionalization of a new narrative.

Second, the Colombian presidents of the last two decades have not only governed with the support of partisan coalitions, but also with the support of the “establishment”. An establishment constituted by leaders of the traditional parties who, like César Gaviria, sharply adjust their discourse, as long as this brings them bureaucratic quotas. Constituted by powerful families, such as the Char families on the Caribbean coast, who exercise political and sometimes economic control over entire regions. An establishment made up of large economic groups, such as that of Sarmiento Angulo, which own the big media and, also, by an Armed Force rewarded, after half a century of armed conflict, with a large slice of the national budget and an elusive or condescending look in the face of their abuses and high levels of corruption.

The triumph of the Historic Pact was achieved, precisely, against the leadership of the parties that supported Duque, Santos, and Uribe; of the media whose generalized hostility towards candidate Petro was grotesquely evident throughout the campaign; of the regional clans that, on this occasion, did not manage to massively turn their voters in the desired direction and of the Armed Forces that, headed by the commander of the National Army, General Eduardo Zapateiro, attacked Petro during the campaign despite the legal prohibition to participate in politics. The victory of the Pact is an electoral victory, but it is, above all, a victory against the ‘establishment’ as a whole.

Third, the triumph of the Historic Pact suspends the naturalization of a development model based on the export of coal and oil, and on the tax and non-tax benefits granted to large business groups. As Harvard professor James Robinson has pointed out, Colombia is a “sea of monopolies and cartels where political connections and barriers to entry are the way to make great fortunes”. Exporting raw materials and protecting the richest with the assumption that doing so is the only guarantee for higher levels of employment and growth has been the magic formula employed by a long series of Colombian presidents.

Petro’s triumph is not, as the dichotomous mentality of the right suggests, the arrival of communism, but the denaturalization of a type of capitalist development model. Petro, who comes from a guerrilla, the M-19, far from Marxist orthodoxies and with a primarily nationalist discourse, made it clear in his words after the triumph: “We are going to develop capitalism in Colombia”. Thus, it is not about introducing a rupture in the mode of production, as predicted by those who see Petro, against all evidence, as a neo-Bolshevik. It is about rethinking the economic model through coordinates that imply a new taxation scheme, a non-extractivist economy, the revision of free trade agreements, access to credit for low-income citizens, the inclusion of elements, at a local scale, of a solidarity economy, and the search for sustainable development.

That this turnaround has been possible is due, above all, to the fact that Petro moderated his discourse compared to past campaigns and included figures that, at another time, would have been radically dissonant. From the Christian pastor Alfredo Saade to economists with clear liberal tendencies such as Alejandro Gaviria or Rudolf Hommes, César Gaviria’s Minister of Finance and directly in charge of setting up the clearly neoliberal program of “economic opening” at the beginning of the nineties.

The victory is also due to the fact that Petro established alliances with marginalized bases and sectors of the traditional parties, such as the one represented by Luis Fernando Velasco, of the Liberal Party, and with dissident politicians, skilled in the management of clientelist networks and in the intrigues of petty politics, such as Roy Barreras. Petro himself tried, in fact, to establish an alliance with César Gaviria, head of the Liberal Party, which was not consummated but who showed his willingness to make concessions to the establishment.

Petro’s challenge, now, is to articulate those elements of moderation and crass realism -without which he possibly would not have won the elections- with the will for change that his election represents and with the desire of the majority of Colombians to close a historical cycle. As often happens in politics, the question is to strike a balance between loyalty to a cause and attention to the effective consequences of the action in a context full of constraints. That balance may not be achieved, but whatever Petro’s success, it is undeniable that Colombians are facing a historic moment.