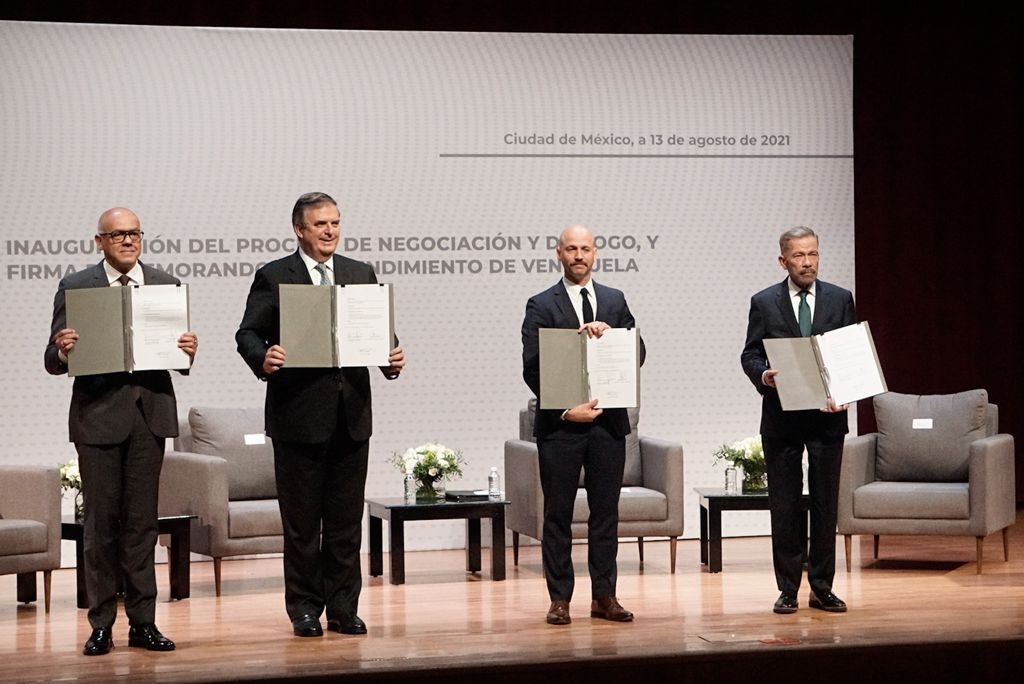 On August 13, 2021, a new negotiation process between the Venezuelan government and the Venezuelan opposition began in the Mexican capital. This will be the fifth negotiation process since 2014 and the second to be carried out under the leadership of the Foreign Ministry of the Kingdom of Norway. The memory of the unsuccessful meetings in Caracas, Oslo, Santo Domingo, and later in Barbados are still fresh in the collective memory of the country.

A new instance of political encounter is inaugurated, which to a large extent evidences the magnitude of the deliberate and systematic destruction of Venezuela. The main characteristics of the Venezuelan political environment are: the hegemonic control of public institutions; the blocking of electoral elections; the persecution, imprisonment and harassment of political parties, political activists, and trade unionists; and other forms of political dissidence.

On this occasion, the Maduro regime is much more in need as it seems that the diplomatic and financial siege is taking its toll. Internal tensions were evident in the recent internal elections that were held prior to the regional elections scheduled to take place at the end of the year. This would appear to serve as evidence that the narrative of political self-sufficiency could be reaching its limits.

What is new in the Mexico 2021 negotiations?

Unlike previous negotiations,  the seven points of the agenda for this one have been opened to public scrutiny: political rights for all; electoral guarantees and electoral schedule; lifting of sanctions and return of assets retained abroad; respect for the Constitutional Rule of Law; political coexistence, renunciation of violence and reparation for the victims of violence; protection of the national economy and social protection measures; guarantees of implementation, follow-up, and verification of what has been agreed. This agenda, as in the previous round, maintains the principle “nothing is agreed upon until everything is agreed upon”.

Within this framework, communication between the parties is particularly important. For the government delegation, the opposition is no longer a “terrorist and destabilizing” group. While from the perspective of the opposition delegation, the Maduro regime is “the government”. This would seem to be a glimpse at the end of the duality of governments. However, it does not necessarily represent the end of the diplomatic support of more than 50 countries of the world for the leadership of Juan Guaidó and other opposition leaders. As the same opposition delegate Gerardo Blyde acknowledged, “each party has had to give up part of its narrative to achieve a starting middle ground”.

Existential bargaining for Venezuela and its politicians

The erosion of the Venezuelan political leadership, on both sides of the table, is undeniable at this point. After the contested parliamentary elections of 2019, the political disaffection of the citizenry has increased proportionally to the worsening of the humanitarian crisis that the country is suffering inside and outside its borders. Between the government’s precariousness to manage the pandemic, the political fragmentation of the opposition, and the lack of agreements for humanitarian aid to reach its destination, the discredit and hopelessness is transversal to the entire political spectrum.

In this sense, the need for an agreement is not only necessary for Venezuelans, but also for the battered political class since both sides of the table need to revitalize their legitimacy.

Another aspect is the effect that the eventual prosecution of the Venezuelan government before the International Criminal Court (ICC) could have, which could unleash ungovernability both nationally and internationally. The reports documented by the United Nations High Commissioner for Human Rights, as well as the repeated inactions of the Venezuelan government in the face of its recommendations, could represent an aggravating factor for the negotiation process.

The fact that the negotiations have been considered in Mexico is also a response to the initiative of the government of Andrés Manuel López Obrador and his Foreign Minister, Marcelo Ebrard, who is seeking to complement the usual diplomatic support that the Mexican government has given to Maduro with his own electoral aspirations. On the other hand, Mexico is currently the only ally in the region that is not immersed in a national political upheaval, such as Cuba or Nicaragua, or in a pre-electoral climate, as is the case of Argentina.

Another diplomat prominent in the negotiation is Dag Nylander, the director of the Norwegian center for conflict resolution, who knows Venezuelan foreign policy very well. In 2017 he was appointed by UN Secretary General António Guterres as representative to the border dispute between Venezuela and Guyana.

However, both parties face great social disaffection. As for the opposition, its erratic leadership in the reconstruction of the “democratic unity” stands out as a complex, sporadic, and deferred work. It has cost the opposition more than expected to unite wills, especially in electoral situations. In this context, these negotiations could contribute to revive its international political recognition and achieve some significant advances at the national level.

It is certainly premature to anticipate the outcome of such a complex process. Nevertheless, previous failed experiences make it clear how difficult it will be to reach an agreement. By virtue of Chavismo’s negotiating record, the only demonstrable thing is its continued fragility in the face of criticism, the unreliability of its word and, above all, its vigorous disposition to the excessive use of violence.

However, under the present circumstances and in view of the internal pressures of Chavismo, some concession on the part of the government, which does not touch very closely the institutions that may guarantee its permanence in power, cannot be discarded. This, with the intention of easing the sanctioning framework that internationally hovers over high-ranking officials of the dictatorship.

It is also necessary to consider that the international climate seems favorable to bring the two positions closer. The demands of the Biden administration seem to be in line with what has been reiterated by the European Union and some nations of the Latin American region in terms of allowing humanitarian assistance and an eventual gradual dismantling of the sanctions. A possibility that will depend on the concession capacity of both parties.

We will have to wait and see what happens next. For the moment, we only have nine representatives on each side, a questionable political representation, mutual distrust, and renewed expectations for a new negotiation. All of those gathered in Mexico City are once again trying to understand each other and to find remedies to the barbarism experienced by Venezuelans.