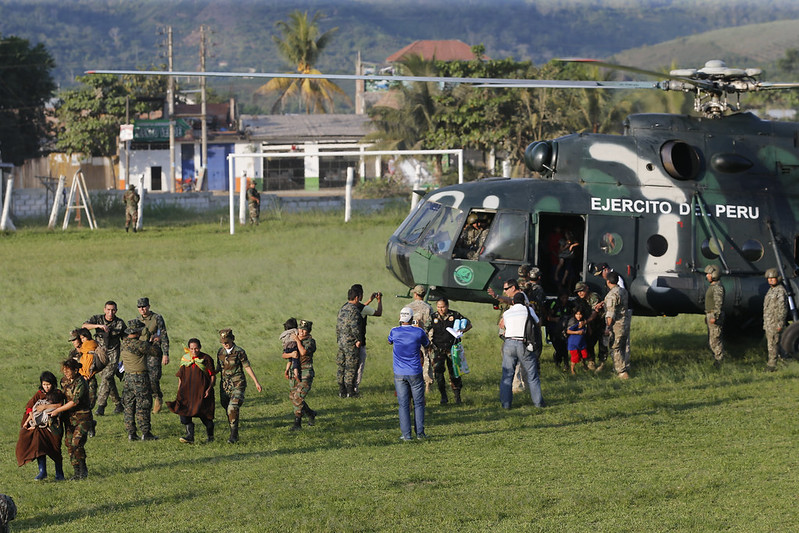 Two weeks before the second round of elections between Pedro Castillo and Keiko Fujimori, an attack by remnants of the Maoist armed group, Shining Path, left at least fourteen dead. The attack took place in the village of San Miguel, Vizcatán province, in the area known as El Vraem, a valley framed by the Apurímac, Ene, and Mantaro rivers. It is a remote mountainous region between the Andes and the Amazon, in southeastern Peru. It is the main coca leaf producing area and has  a strong presence of drug traffickers. The last dissident column of the Shining Path operates there. Messages left at the site called for a boycott of the June 6 elections.

The Shining Path’s past

For younger people, the names Abimael Guzman, Elena Iparraguirre or Osman Morote and the nicknames Comrade Feliciano, Comrade Artemio or Chairman Gonzalo, are totally unknown. These are some of the historical leaders of the Marxist-Maoist Communist Party of Peru, Shining Path, which used practices in Peru similar to those of the Khmer Rouge in Cambodia.

Although all of them have been imprisoned for many years, the organization has continued its course under the command of new cadres who took refuge in the jungles and hills of the Peruvian interior. Over time, this “revolutionary” organization, according to its founding postulates, became a criminal gang linked to drug trafficking, completely abandoning its original ideas of taking power and generating a new communist society.

In 2001, the Peruvian Truth and Reconciliation Commission concluded that the so-called “people’s war” promoted by the subversive organization “Partido Comunista del Perú-Sendero Luminoso” “was the fundamental cause for the unleashing of the internal armed conflict”. This group was “the main perpetrator of crimes and human rights violations” in the country between 1980 and 2000, although the intensity of this campaign decreased markedly after 1992, when the leader Abimael Guzman and several of his main leaders were arrested.

That report, however, hardly mentioned the numerous human rights violations and other abuses that the armed forces and police committed against the population, as well as those of the irregular groups linked to the government during the administration of Alberto Fujimori and his principal officer during those years, Vladimiro Montesinos.

The remnant of the Militarized Communist Party of Peru

Two decades later, remnants of the Shining Path continue to break into villages, take control of land, and impose its justice in an area of the Peruvian jungle where it survives thanks to drug trafficking. The absence of the State and an impenetrable geography allow the remnants of the armed group to establish a criminal order in a valley that covers five regions of Peru.

The group, currently known as the Militarized Communist Party of Peru (Partido Militarizado Partido Comunista del Perú), has subjected the communities settled in the drug circuits of the Apurímac, Ene and Mantaro river valleys (Vraem) to its will. It imposes its own justice on the inhabitants, forces them to migrate, or submits them to its will in order to exploit crops and other activities in the region.

According to the head of the Special Investigations Division of Peru’s Anti-Drug Directorate (Dirandro), this group guards the laboratories and cocaine transit in the area in exchange for large payments to drug trafficking networks. The latest report from the National Commission for Development and Life without Drugs (Devida) indicates that Peru is home to 54,655 hectares of coca leaf, of which 26,028 are in the Vraem. This is the sector with the most coca plantations and is where the largest amount of cocaine hydrochloride is produced in the country.

Víctor Quispe Palomino, alias “José”, a former member of the Shining Path’s Main Regional Committee, and his brother Jorge, alias “Raúl”, are in command of this group. They understood that extorting the drug gangs operating in the area would be a profitable business and began to pressure them to pay tribute in exchange for not interfering in their business.

Over time, these groups formed an alliance whereby the Shining Path offers protection to the crops, laboratories, and “backpackers”, those who transport the drugs, to avoid detection by the authorities as the region lacks adequate roads to get the products out quickly and safely. The backpackers have a protection network along their routes through armed elements who have an extensive and very efficient intelligence network.

The Peruvian Anti-Terrorist Directorate estimates that some 400 men and women are under the command of the Quispe Palomino brothers in the Vraem. The main force, made up of 30 members and columns of 10 or 12 members, are located in Vizcatán del Ene. For the authorities, they make up an encapsulated group with no possibility of expanding.

The threat posed by this armed organization, however, is expanding at the pace of the drug business. Its subsistence is due to the drug traffickers, so it acts when they fall into risky situations. In fact, its members, like the old cadres of some 40 years ago, are extremely distrustful to the point of spying, persecuting, and even executing family members of their own members. The authorities offer very good monetary rewards to those who provide information that leads to the capture of its members or even to the dismantling of a column.

The head of the Joint Command of the Armed Forces points out that the replacement of commanders of the remnants of the Shining Path is very complicated, so the dismantling of a column would eventually lead to its extinction. Therefore, the group is not considered a threat to the country to the extent that drug trafficking is. Although both operate in perverse complicity.