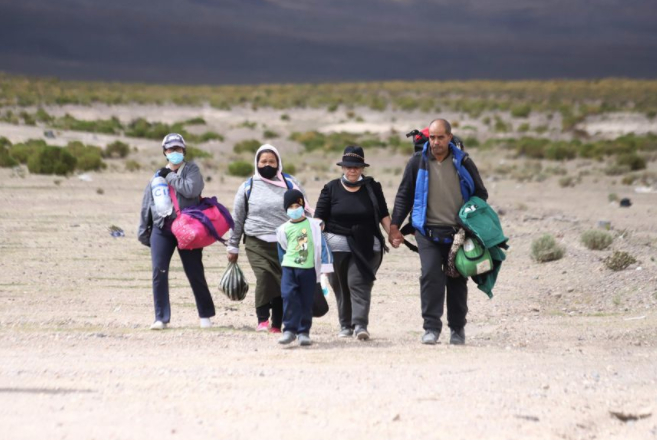 Every day some 500 refugees and migrants, including children, cross the dangerous high plateau of the Andes Mountains on foot to enter Chile, according to the UN. Many of them are victims of human smuggling networks and abuses at the hands of smugglers that have so far left 21 dead, including a nine-month-old baby.

The new Chilean Migration Law differentiates refugee status from migration, separating foreign people whose residence in Chile is justified on humanitarian grounds. Since 2018, as a result of the humanitarian crisis in Venezuela, the UN has urged Latin American countries to provide international protection to people originating from this country. The UN has stressed that this is a humanitarian act and not a political one. However, the continent’s largest refugee crisis has been treated as an irregular migration crisis.

Chile’s border with Peru and Bolivia has been closed since the beginning of the pandemic. As if that were not enough, the majority of visa applications have been rejected, and the right to refuge has been suspended in practice. Following the suspension of the right to refuge by the Ministry of the Interior, the Comptroller General of the Republic issued an opinion that recognizes the inappropriateness of the official decision and the need to guarantee the right to request refuge, in accordance with national law and international human rights agreements. However, Chile has only granted 20 refugee statuses to Venezuelans, three of which were children.

Migration also impacts host communities. Its effects can be felt in the border communities, like Colchane, and in the metro region of Santiago, the capital of Chile, which receives thousands of people every day. The challenges implied by this process require adequate economic, political, and social responses, but the scarcity of these actions has generated increasing forms of discrimination and xenophobic manifestations, such as an anti-immigrant march in Iquique in September 2021. In response, the Red Cross has repeatedly called for the adoption of the principle of “Do No Harm” to people, including by the Chilean population.

The Interagency Coordination Platform for Refugees and Migrants from Venezuela (R4V) was formed by the UN, together with governments and assistance organizations with the aim of providing a coherent response to Venezuelan migration. According to this platform, there are more than half a million people in need of humanitarian aid in Chile, and 73% of refugees and migrants from Venezuela are in an irregular situation.

Without the possibility of accessing refugee or migration regularization alternatives, this population is a victim of all kinds of exploitation and violence: many cannot even rent a house and face various problems when it comes to accessing basic services, such as health or education.

The challenges of Boric’s future government

In relation to Venezuelan migration, it is important to understand that the situation will not improve as long as the current conditions, which have led more than six million people to leave their country, do not change. At the current rate, until the change of leadership on March 11, more than 30 thousand refugees and migrants will risk their lives entering the country through unauthorized crossings. This humanitarian crisis is one of the main challenges facing the future government of President-elect, Gabriel Boric, and there is still no solution in sight.

However, the humanitarian crisis is more of a bureaucratic problem than a practical one. People are left homeless and without the means to live because of their irregular migratory status and insufficient humanitarian aid. On the other hand, according to the Central Bank of Chile, migration generates positive effects and is associated with an increase in GDP per capita and an average population that is more qualified, younger, and more hardworking than the national population.

The new administration must understand that irregular entries will not cease until the reception of refugee applications and the granting of visas is restored. In addition, conflicts are resolved by coordinating humanitarian aid with municipalities and organizations. At the international level, the countries meeting as a part of the Quito Process have the opportunity to negotiate refugee quotas and the resettlement of refugees. All actors must assume that humanitarian aid cannot be politicized. To a regional problem, it is necessary to offer a regional response.

He is a specialist in human rights and refugee law. Master in Fundamental Rights from the Carlos III University of Madrid. He has served on the Inter-American Commission on Human Rights (IACHR) and several UN agencies.