On June 11, 2022, the Brazilian diaspora witnessed an unprecedented political event. During a visit to the United States, Brazilian President Jair Bolsonaro participated in a motorcycle rally organized by his supporters through the streets of Orlando, Florida. Over the course of almost four years, motorcycle caravans through major Brazilian cities have become a political action of the federal government. Although in many cases these are poorly attended and accompanied by jeers, they are a way of challenging local opposition governments and emulating in the media a popular support that bolsonarismo lacks.

Videos and photos from Orlando show a mobilization composed mostly of middle-aged white men, wearing national football team jerseys and riding large motorcycles. Produced by Brazilian organizations in Florida, the caravan was part of a state agenda that began with participation in the Summit of the Americas and ended with Bolsonaro inaugurating the Brazilian vice consulate in Orlando. In one of his many speeches, President Bolsonaro emphasized, among other things, that he and his public are “normal people” and, more than oxygen, they need freedom.

Brazilians deported from the United States

The day before, on June 10, the international airport of Confins, in Minas Gerais, registered the landing of the 64th plane chartered by the U.S. government to repatriate Brazilian deportees from the United States. This is a process that had been suspended in 2008, but which gained momentum again during the administrations of Donald Trump and Jair Bolsonaro.

The first of those flights landed in October 2019 and, since then, 6,441 Brazilians have been deported and all of them to Confins airport. There is little information about the choice of this airport, but it is believed that, due to the strong migration networks’ history between Minas Gerais and the United States, the U.S. government understands that the vast majority of Brazilians originate or departed from there. Violating reciprocity laws and national sovereignty, the U.S. government has been pushing this measure and the Bolsonaro government accepts it without protest.

Various media outlets show that there is no reception policy for these Brazilians. Those who arrive in Minas Gerais must rely on their own resources or family networks to return to their respective states. In addition, these deportees constantly file complaints of violence during the process.

Currently, there are 89,971 cases of Brazilians pending deportation. The US fiscal year ends in September. The expectation is that the number of flights with deportees will increase until then. The vast majority are located in the three main U.S. states of residence of Brazilian migration: Massachusetts, New Jersey and Florida. The latter has more than 9,000 Brazilians pending trial.

However, the figures acquire a greater proportion when analyzing data from the Yearbook of Immigration Statistics. According to this source, between 2019 and 2021, 81,935 Brazilians were detained at U.S. borders, with the vast majority occurring in the state of Texas. That suggests that a large portion of Brazilians are accessing U.S. territory through migratory routes that pass through Central America and Mexico. Nearly 170,000 Brazilians were detained and/or are in prison for crossing the border into the United States in search of better living conditions.

Who are these Brazilians?

There is no shortage of those who judge these invisible Brazilians. Many say they are people who bring shame to the country; “illegal” migrants who are harming U.S. sovereignty. Therefore, detention and expulsion are more than legitimate measures promoted by the Trump and Biden administrations. That is securing their own freedom. It should be noted that our president also shares this premise.

We have a supposedly patriotic government, which unilaterally allows the circulation of certain nationalities in Brazil, but quietly accepts the mistreatment of undocumented Brazilians abroad. The surprise doesn’t end there. Both the presidency and certain federal deputies vehemently defend the construction of the wall to guarantee “American” democracy.

But who are these deported Brazilians? What do they say about this particular Brazil? Why are the federal and Minas Gerais governments silent on how these Brazilians are being deported?

Contrary to the adventurous scenario drawn by the media, our international airports have become escape routes for many Brazilians who cannot stand our rising cost of living, unemployment or informal employment, as well as the increasing funding cuts in sectors perceived by the government as “an expense”, such as health and education.

The airports of Guarulhos, Santos Dumont and Confins are some of the exit doors to escape social misery and economic inequality, which are being camouflaged as a struggle of good against evil. A struggle that extends to the borders of the United States.

Brazilian migrants cross Central America on foot, face violence and death, and are finally stopped by U.S. patrols and their war paraphernalia. Once there, they are illegal, like drugs, or criminals. Meanwhile, here they are a national disgrace. Detained, shamed and deported, they all return to Confins airport and, once again, are left to fend for themselves. Confins airport has become a revolving door, where our misery comes and goes.

Meanwhile, the motorcycle rally in Orlando scratches the asphalt and draws a banana republic in the face of gringos. Hallucinated and comfortably seated on their powerful motorcycles, these patriots parade through Orlando, making it clear once again that the so-called “beloved homeland, Brazil” is not for everyone. 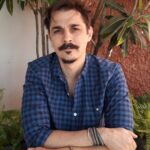 Professor at the State University of Montes Claros – UNIMONTES (Brazil). PhD in Sociology from Goldsmiths University of London. Specializes in international migration of Brazilians and border regimes.