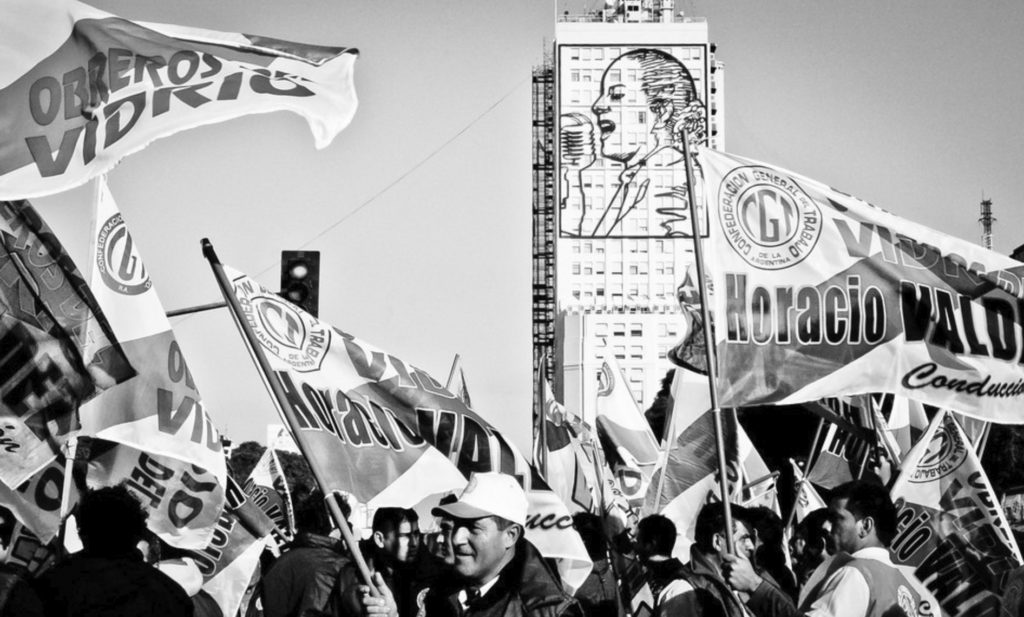 So much has been written and said about October 17, 1945 in Argentina. A founding myth, a historical hinge and watershed, an iconic date that is identified with the birth of Peronism. A living component of the historical-political narrative that began 75 years ago and endures to these days. And a “kaleidoscopic artifact”: depending on how it turns, it places the pieces of what happened that day when Perón was first acclaimed in the Plaza de Mayo. Was it a spontaneous mobilization? Meaning, “the people fighting a direct battle with the oligarchy and triumphing as a consequence of a mass policy,” as John William Cooke defined it. Or an orchestrated staging made by the power?, as described by other authors. Did it mean a revolution “from below” or “from above”? A social revolution or a restorative replacement to prevent such revolutionary change?

On that day, for the first time, people demonstrating on the streets twisted the arm of a military dictatorship. It then consecrated the former strongman of that same dictatorship as the new popular leader, at the head of a mass political movement identified with the cause of the workers and the banner of social justice.

a revolutionary phenomenon, because it came to change the prevailing status quo. But also conservative, because it will aspire to restore a social balance that it considers threatened or altered by exogenous or “distorting” factors

Were the masses of workers, who were bursting in as the main actor, weighing more, the pronouncements of the trade union organizations or the palace intrigues and political-military movements in the circles of power? As we pointed out in several works with Santiago Senén González, Peronism´s birth certificate will carry that contradictory and multifaceted characteristic that will mark its course. It will be a revolutionary phenomenon, because it came to change the prevailing status quo. But also conservative, because it will aspire to restore a social balance that it considers threatened or altered by exogenous or “distorting” factors (“the anti-people,” “the oligarchy,” “the class struggle,” “neoliberalism,” and so on and so forth…).

A fact whose significance was changing and contradictory also for foreign observers. Not only because of the importance it had for international public opinion, foreign relations and especially relations between the United States and Latin America. But also because of the high incidence that this external view had on the evolution of events and on the behavior of the main actors.

Between mid-1945 and early 1946, in barely four months, the main source of concern that Argentina represented for the United States took a drastic change of course: the blinking beacon of the “Nazi threat” in South America was turned off on the maps of the State Department and the Pentagon; instead, the warning lights were turned on to the “communist danger” in the south of the continent.

Perón, whose leadership was wrapped up in the Prussian militarism and anti-liberal populism that ruffled the feathers of the majority of Western diplomats and observers of the 1940s, managed to build a strategy and a doctrine -the Third Position- that would allow him to accumulate and maintain domestic power against the left and right and adapt to a new geopolitical hibernation, from neutrality during the Second War to the Third Position during the Cold War. Decades later, the scene will be repeated, represented by another colonel who admired one of the first versions of Perón and who was at the helm of his own revolution in Venezuela, with aspirations to export it to the rest of Latin America in his anti-imperialist crusade against Washington: Commander Hugo Chávez,

It was also in this interaction, between the domestic and external dimensions of politics, that Peronism was forged with multiple facets,  striking a balance between antagonisms, but also including those antagonisms in its own midst. With the dramatic consequences that this brought about throughout its history. On the one hand, its remarkable capacity for adaptation and durability.

regimes that went from the “neo-liberal populism” of Carlos Menem to the “progressive populism” of Néstor and Cristina Kirchner.

Peronism was installed in the nation during the leader’s first 29 years until his death, the first ten in power, the next 17 from exile and outlawing, and the last ten, already old, with the installation of the last dictatorship. And since the recovery of democracy, in 1983, 25 years in government and 12 in opposition, with regimes that went from the “neo-liberal populism” of Carlos Menem to the “progressive populism” of Néstor and Cristina Kirchner.

That same versatility of Peronism to go along with the changes of time, containing the extremes of the political spectrum and maintaining the conflict by marking the diffuse and dividing line between “friends” and “enemies,” will also be its own limitation and problem. At the moment when the political cycles are exhausted or its internal contradictions and the disputes for the vacant or diminishing leadership explode.

Argentina’s current political moment maintains the dynamic of that historical process and the crises that derive from it: a leadership, that of Cristina Kirchner, which persists in the government at the cost of staying in the background as vice president, as ” the power in the shadows”. And a government, that of President Alberto Fernández, which is struggling with a real power that restricts his maneuvering capacity to gain his own strength, and transcend the “charismatic moment” of the one who designated him as a candidate. Variants of the same phenomenon, typical of a particular country. But as Alain Rouquié pointed out in “The Century of Perón. An Essay on Hegemonic Democracies”, does not belong only to the past nor is it exclusive to a particular country in South America.