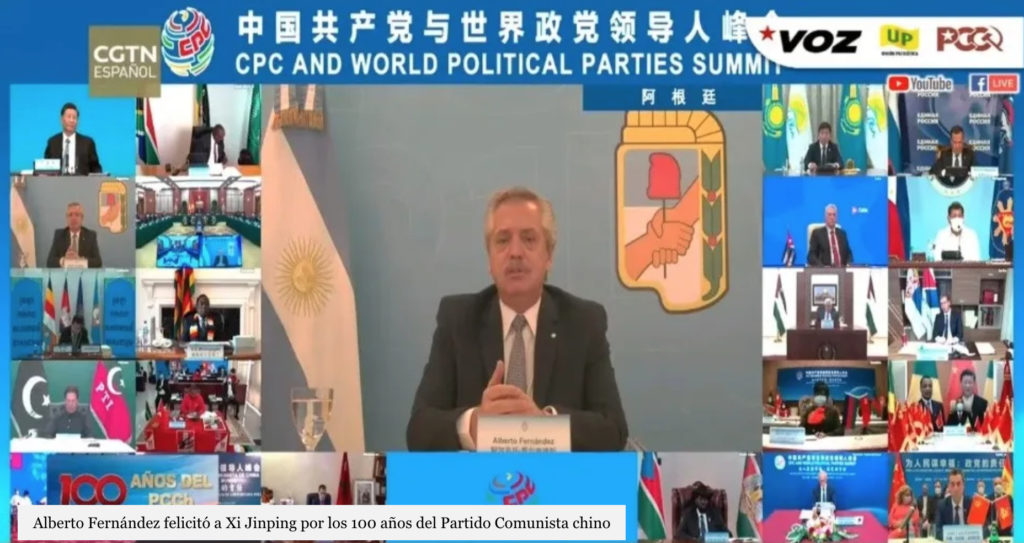 China’s projection as a world power is not only economic and geopolitical but is also beginning to be political and ideological. This is often called “soft power.” In other words, it is the battle for cultural hegemony: how ideas, images, and symbologies influence the political development of countries and national debates. The pandemic has placed another additional factor into this global struggle, which is the debate over the most effective or “successful” “models” for overcoming the health crisis affecting humanity.

This was shown by the recent Summit of the Chinese Communist Party and the world’s political parties, a virtual mega-event organized as part of the celebration of the CCP’s centenary. It was attended by leaders from more than 160 countries, led by the President of the People’s Republic of China and General Secretary of the CCP Central Committee, Xi Jinping.

There was a bit of everything. Numerous Latin American leaders were in attendance: Alberto Fernandez, the Argentine President and currently the head of the Justicialist Party and head of the ruling coalition, the Frente de Todos; Miguel Diaz-Canel, Secretary General of the Cuban Communist Party and President of Cuba; Evo Morales, the former President of Bolivia who was accompanied by a delegation of the MAS (Movimiento al Socialismo), which is currently ruling in his country. This is without mentioning the numerous other representatives of communist parties from several Latin American, African, and Asian countries and representatives of European alternative left movements.

Additionally, the South African president and head of the African National Congress, Cyril Ramaphosa; Dmitry Medvedev, the former president of Russia and deputy minister of the country’s Security Council, both attended the Summit. Furthermore, leaders with dubious democratic credentials such as Nursultan Nazarbayev, former head of state of Kazakhstan between 1990 and 2019, and Rodrigo Duterte, the president of the Philippines who governs with martial law and summary executions, were also present. Virtually no women were seen among the participants.

What is new is that the People’s Republic of China at this stage of its “peaceful rise,” while advocating the principle of non-interference in the international arena, is adopting greater activism in sheltering, encouraging, and promoting political forces disenchanted, critical, or manifestly adverse to liberal democracy as it has been conceived, established, and achieved in the Western world and expanded worldwide over the last century.

After the third wave of democratization, as defined by Samuel Huntington, which accompanied the end of the Cold War (1974-1990) and the fourth wave of democratization that drove so many other mobilizations and advances in the conquest of rights in the first two decades of the 21st century, indicators have long been observed that show the entry into a cycle of reversion, recession, or regression of democracy. This has been affecting both central countries with mature democracies and the emerging world with more recent democracies.

This clear challenge to the declining leadership of the US can be read in two ways: first, as a reissue of East/West bipolarity, with Beijing taking the place of Moscow during the Cold War, or as an encouragement of multipolarity and multilateralism. Both trends can be concurrent or divergent and conflicting. At this summit, Xi Jinping pointed out that “the judgment on whether a country is democratic or not should be made by its own people, not by a handful of others”.

Xi also stressed the role of “political parties as an important force in promoting the progress of humanity” and went on to affirm that they “must chart the right path to follow and assume the historical responsibility of ensuring the welfare of the people. Herein lies the substantial difference -there are those who believe that “the right path” has already been written and trodden in the past and that only that fixed path can be taken, repressing or despising those who deviate from it, and those who believe that such path is that which is defined by guaranteeing that the people can freely express themselves, choose and decide their destiny.

Welcome, then, this recognition from the People’s Republic of China of the importance of “political parties”, in the plural. Although in China, there is only one party, of course. It could be evidence of a greater rapprochement and understanding of Chinese leaders to the historical experience of Western modernity, with its particularities, of which Latin America is part. Since the first struggles for emancipation in the 19th century, Latin American peoples have formed political parties to achieve self-determination, fought bloody civil wars, suffered dictatorships and found in pluralist democracy the least bad political system to resolve their conflicts and live together in peace.

Therefore, those who praise the “Chinese model” or seek to replicate “one-party democracy” as a supposed alternative to pluralist democracy are missing the point. They do not believe that true democracy should guarantee free and competitive elections. They do not care much about the fundamental importance of freedom of expression and the right to criticize and protest regardless of the sign of the government or the contents of its policies. They do not believe that the alternation of power between different political forces is beneficial to societies. They justify the legality of censoring, prohibiting, persecuting, or repressing those who question the fact that a government can control all the reins of a country’s life.

They should recognize that what they are really vindicating is some form of dictatorship. For whatever reasons and justifications, they do not do so because they cannot credibly sustain the alleged benefits of a dictatorship. It is easier, then, to preach about the shortcomings of democracies. China, meanwhile, watches expectantly. And it is projecting its vision of the world to come on a planetary scale.

*This text is an expanded version of a text originally published in Clarín, Argentina.