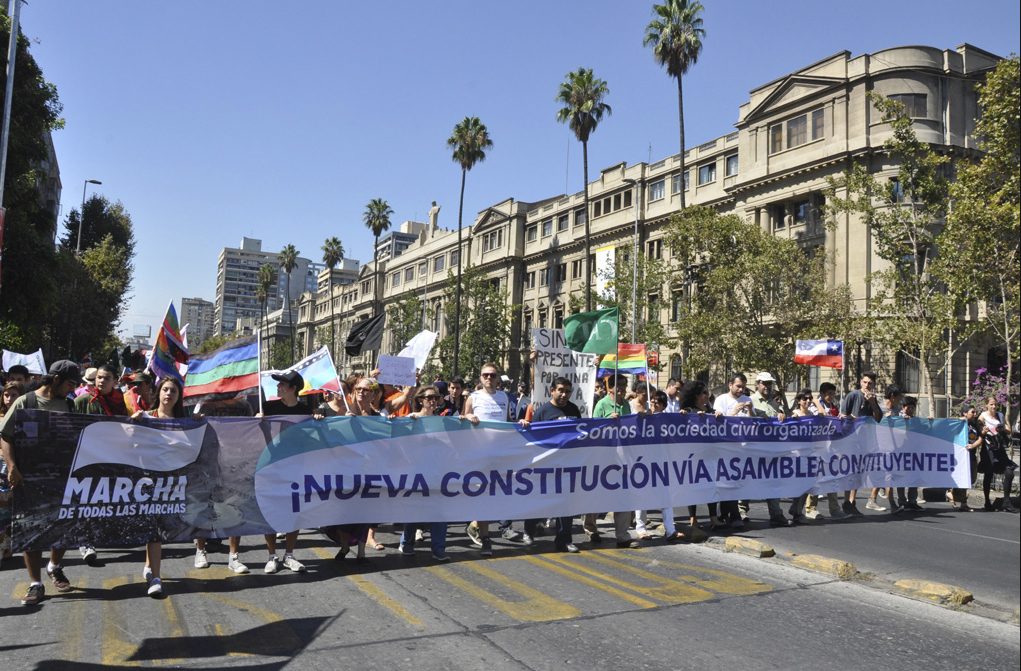 The striking result of the Chilean plebiscite of October 25, 2020, which enshrined the popular option for a new Constitution to be drawn up by a Constituent Assembly (Constitutional Convention) elected exclusively for this purpose, carries several symbolisms. Above all, it ends a long period of submission of Chilean society to an illegitimate legal framework. But beyond the cycle that ends, it is difficult to predict the content of what will replace it.

First of all, we must recognize the illegitimacy of the 1980’s Constitution, drafted by the military dictatorship led by Augusto Pinochet and imposed through a simulacrum of plebiscite. Later, when the democratic oppositions agreed to participate in the 1988 plebiscite, and through the campaign for No, defeated Pinochet’s alternative of continuity at the polls, there was not only something to celebrate. Participation also symbolized a tacit recognition of Pinochet’s institutions, and was consecrated to the “conservative transition” that ended the dictatorship without leading to full democracy. With the victory in 1988, there was no way out for the democratic forces except to negotiate with the dictatorship – and to do so on the playing field chosen by it, under its rules.

As a consequence, the analyses of hegemonic political science that gave rise to an endless “transition to democracy” in Chile became famous throughout the 1990s. In fact, it was not an endless transition, but the transition that had already been completed to a limited democracy of very low intensity.

For decades, it will be discussed whether the end of the dictatorship could have been different

For decades, it will be discussed whether the end of the dictatorship could have been different, or whether the Concertación de Partidos por la Democracia (the opposition that won most of the next presidential elections) could have advanced more decisively along the path of democratic and social reforms and in settling accounts with the past.

In any case, it was then a society marked by trauma and reorganized by the “neoliberal laboratory” initiated by the dictatorship as recently as the 1970s. The new Chilean neo-liberal society that emerged from the dictatorship was presented internationally as a successful neo-liberal case. Political stability and high rates of economic growth did not allow the vast majority of analysts to glimpse what could be happening underground and the magmas that could be moving.

Until the social crash of October 18, 2019, it was not exactly a “ray in the blue sky”. Several important protest movements had already occurred in previous years, such as the high school student movement of 2006 (the “Penguin Revolution”). But nothing like the largest social storm in Chile happening in October 25, 2019, which occupied the streets for months and caused citizen assemblies and barricades to break out everywhere (besides the hundreds of public buildings and subway stations destroyed). The unexpected occurred in the model country. Not even centuries of mainstream political science could foresee it.

Beyond the popular violence that exploded at various times during the rebellion, one should not forget the dead, wounded, raped and humiliated people by police forces (of the 411 with injuries to the eyeball, for example). In any case, this author was in Santiago throughout the entire period, and was able to see, in addition to occasional outbursts of anger, violence and depredation, the hope, joy and liberation in the eyes of every demonstrator, every woman, every young person present at the protests.

If the explosion had begun with the increase in the prices of subway tickets, soon several protesters emerged, almost as many as those who were part of them. But the clamors for a new constitution, for reforms in private pension systems and for the resignation of right-wing President Sebastián Piñera were quickly imposed. The emergence of issues of gender equality and Mapuche sovereignty (with its flag being raised as an icon of demonstrations) were also striking.

The social revolt without leadership was channeled into institutional change

The social revolt without leadership was channeled into institutional change, in an agreement that involved most political forces trying to understand, contain or take advantage of the mobilization. Piñera stayed, albeit at a long end of his term. Pension reform continues to be discussed. And it was agreed to hold a plebiscite to decide if there would be a constituent and what it would look like, instead of calling it at once.

Thus, after a year of uncertainty and postponement (with the Covid-19 pandemic further disrupting the process), the plebiscite finally took place. 78% approved the drafting of the new Constitution, 79% defined that its authors would be assemblies elected only for this purpose (the other “mixed” option would be with half the assembly composed of current congressmen).

Only a social earthquake to break all the institutional blockade and political crystallization that had been dragging on since 1988, and to put the internationally glorified neoliberal model on hold. Once the votes of the plebiscite have been counted, where can this clear option for change go? Some important questions are still missing from the constituent process. It has already been defined that it will have gender parity, but it is not yet clear when it will begin, how long it will last, whether its decisions will be made by simple majority or by two-thirds, or whether the elaboration of the Charter will start from scratch (the “blank sheet”, hoja en blanco) or of the current Constitution.

When it comes to the streets, it is not known whether the dissatisfaction has been definitively channeled into the institutional path. The maintenance of popular mobilization will be fundamental in determining whether the transformations will go in the direction of changes in the political system accompanied by some reforms in the neoliberal model; or whether they will move toward more structural changes.

What is known is that we are witnessing the end of a cycle, but it is difficult to project what will replace it. In any case, even if in the end all the potential contained in the social stalemate is not realized, at least Chilean society will finally have a legitimate constitution – which is no small thing. But the “great avenues” are still open for the possibility of developing a high-intensity democracy and rebuilding social organization. With this, Chile would move away from two central premises of neoliberalism: authoritarianism and individualism.

And so, the whole process could be of even more transcendental importance than it has been already assumed. It could project a message of more democracy and more rights to Latin America and the world, in the midst of a regional and global context of the advance of all sorts of authoritarianism and exclusion.